How to Fly Fish with the Adams Fly [Fish & Tie] 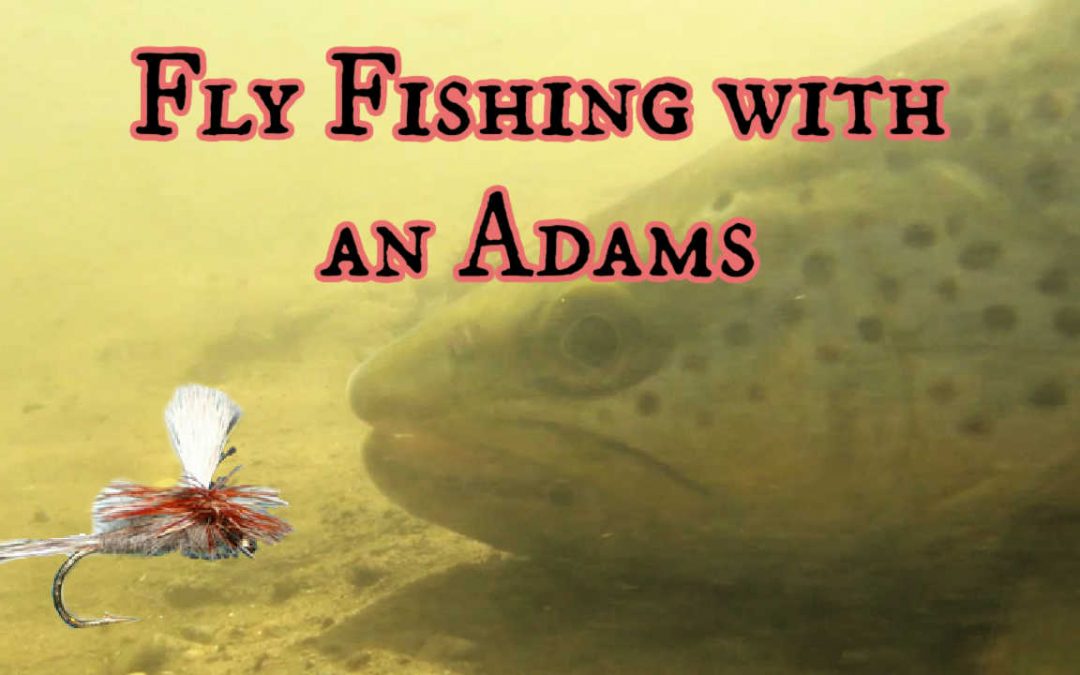 I’ve been thinking of going some videos where I would tie a fly and use that single fly to catch dinner.  I could call it “Fly Fish for Survival” or “Tie and Fry”.  If it was a dry fly, I’d pick the Adams.  If it was a streamer, I’d pick a muddler minnow or variant.

I’m a Michigander so loving the Adams is easy.  Created on the Broadman River in what’s called Hemingway Country.  Created back in the 1920’s it’s surprising that the Adams has stayed so popular.   I favor the parachute version mostly because the post makes it more visible and seems to float more upright.

The Boardman River is in the beautiful town of Traverse City.  If your looking to complete a bucket list item, like catching trout where Hemingway fished and the Adam’s fly was created, I can point you to EXACTLY where to go.

Map to the Home of the Adams Fly

The Boardman is still a fantastic little stream, lots of public access and usually you can find some eager brook trout.

In many places brook trout have declined and planting of brown and rainbow trout have taken over what was once the brookies’ domain, I doubt that any fly has accounted for as many trout as the Adams, and that includes the ubiquitous Royal Coachman or Elk Hair Caddis.

If you want to read some history about the Adams check out Wikipedia.  Here’s a LINK to the page.

The characteristics that I feel, make this the fly to use for “Fly Fishing for Survival” is the high floating tail, the lightly dubbed body to absorb floatant and the grizzly hackle that provides a more realistic wing.

The parachute version takes it one step better by providing an easily seen flag on those spring evenings when the sun is setting.

Guide Tip: The phrase “All mayflies look like an Adams to me.” That certainly simplifies life.

Are you looking For some Adams Flies?

I’ve bought flies from shops all over the country side. Most flies come from overseas, so when it comes to buying them whether online or in a shop I usually order by the dozen off Amazon. The best deal I’ve found is Adams Flies from SuperBe Flies (AMAZON LINK). The quality and durability have been good for the price.

How to Fish with the Adams Fly

Using an Adams fly strikes to the core of dry fly fishing.  Anytime you reach into your fly box for an Adams you need to see actively rising fish.   These risers will usually take bugs that float drag free in a food lane.

Bubble lines and changes in current usually mark holding water for trout.  That boulder or log provides a current break and funnels food.  Take advantage of these characteristics by gradually working into the fish feeding lane.

Your position affects the flies drift so study the water current and position yourself to minimize fly line on the water.  This often means making a short cast, so wade slowly and softly.

Another tip is to patiently watch for timing patterns.  The same as you and I trout will take a bit, chew and swallow, then begin looking for food again.  Casting as soon as you see a trout rise, usually isn’t the best time to drift an Adams over the fish.  Give that riser a 30 count and then cast.

Gear for Using the Adams Fly

My setup is simple.  A 9-foot, 4 weight with a medium fast action is my go to fly rod.  A couple years ago I broke my favorite fly rod.  A 2-piece G Loomis that I built, I left it on my vans roof top and drove away.  I heard it slide off and looked back in the rearview mirror to see the vehicle behind me drive over it…..I still mourn that loss.

It seems like selecting the correct fly line is a trial-and-error endeavor. Higher priced lines seem to push the traditional weight ranges.  This is why you see the big-name brands selling “PLUS” lines.  They used to be marketed with terms like “½ size heavy” for fast action fly rods.

With a medium fast action rod, you can usually use either the “correct weight” or a weight up as long as you’re not trying to push your casting limits.

Onto the leader I’ll tie a 12-to-16-inch piece of 5X tippet.  For a long time, I didn’t use tippet, now I do.  It just makes sense to extend the leader to quickly change flies and create a more invisible link between you and the Adams fly.

Onto the tippet I tie my fly.  I try to generally match the size of the fly with something I’m seeing.  Here in Michigan, we have a beautiful mayfly and caddis hatches that are about a size 14.  Look around in the river side spider webs and back eddies to see what size Adams you should tie on.

Reading the Water and Matching the Hatch

In the morning as the water warms, bugs start moving.  I love mornings to dry fly fish.  Remember if you know the water, you’ll be fishing get to your spot early.  If you’ve learned the moods of a river in the get out BEFORE the sun touches the water.

The next best time is late afternoon, where I’m at the most prolific hatches are in the afternoon.  Sometimes your fly can become one of hundreds which can make it tough.

Look for spots that satisfy a trout’s needs.  I’ve written this so many times – Food, Protection and Rest.  This usually means the fish are in that bubble line under those riverside alders.

Tricks for Catching More with the Adams Fly

Keep your Adams floating high.  The material on the Adams naturally floats, but you need to treat it before it hits the water.  I often pre-treat my flies with dressing days before hitting the water.

Don’t let losing a fly stop you from casting.  One of my most memorable fish was feeding right against a line of cattails.  My first cast was into the cattails and I jerked and pulled until it popped out.  Guess where my second cast went- you right into the cattails again.  Luckily it pulled out easily and dropped into the water without any debris.  I let it drift and BAM fish on.

In the big picture flies are cheap, memories of beautiful summer nights catching trout are priceless.

Short accurate casts are always best.  Very seldom do the currents work with you drifting an Adams.  The best way to achieve a drag free drift is to keep as much fly line off the water as possible.  Get close to the fish and make a good cast.

How to Tie an Adams Fly

The nice thing about the Adams is that it’s not a hard fly to tie. Here are some considerations I believe you will find helpful:

As the video illustrates, don’t strip the barbules from the stems preparatory to tying on the wings-I simply stroke them back and hold them in that position. I do most of my hackle-tip wings in this manner, except on very small flies. Give it a try-you may solve some long-standing problems.

Fly Fishers International has an incredible library of fly recipes HERE is a link the webpage. For years they published the “Fly of the Month” https://flyfishersinternational.org/Tying/Educational-Resources/Fly-of-the-Month

Tying Tactics for the Adams

How much hackle for tailing material for a given fly? I consider the type of water in which the fly will be used. For flat water, I dress my flies sparsely. I want a clean, uncluttered silhouette. For rougher water, I beef them up a bit.

There are other variations of the Adams, two of which have been very successful for e. One is the Teal-Wing Adams, with a black-and-white barred teal flank feather substituted for the hackle-tip wings. It is tied in exactly the same manner as the wood duck wing on a Light Cahill dry fly. It results in the same color mix as the standard Adams while saving on precious grizzly feathers.

The other pattern is the Parachute Adams. With an upright wing of white calf tail, or, better yet, calf body hair, and hackles wound parachute–style around the base of the wing. When doing parachute hackles, select feathers with very fine, flexible steams. Work each turn beneath the previous one, using minimal tension, and don’t over-hackle the fly.

Try the Parachute Adams. It’s particularly effective on rough water and in failing light, due to its visibility. I particularly favor this fly in #14 and #16, but have dressed the pattern in size #10 through #20.

You can create your own variations of the Adams by varying the shading of the body and hackle. I have quite a diversified Adams box.  Light colored bodies work great when the caddis is hatching. Tying in high floating elk hair for a tail, works well when using an Adams as the indicator in a dry dropper setup.

The Last Cast – with an Adams

I have a list of what I call “foundational flies” which are those flies that can save the day when you’re 3 hours from a fly shop.  The Adams is on that list.  There’s a reason this fly has been popular for so long, it just looks like so many bugs.  Change the size up or down and you can probably catch any actively feeding fish.