How to Choose the Right Nymph & Catch More Trout! 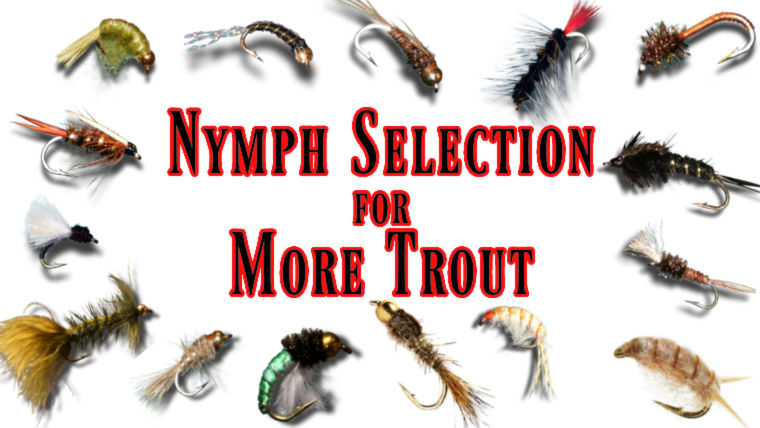 I’ve written so many articles on nymph fishing, because it’s affective. Competitive fly fishers are masters of reading the water and NYMPH fishing. So if the bass, trout and panfish are eating mostly below the water surface. The question is:

Which nymph do I use under a variety of circumstances?

I love the words: “keep it simple” simplifying and eliminating the variables is the key to fly fishing, especially nymph fishing. Here are few ways to eliminate some variables on the stream, choose an appropriate nymph, and improve your catch rate.

Start Your Nymph Selection with Facts

I started my working career as an Engineer, so I’m always leaning toward getting data to help make decisions. I’ve played with three ideas over the years to help.

Use a Stomach Pump to See What the Fish are Eating

A stomach pump (link available at amazon) helps you see what the fish are eating and choose the right nymph for your situation on the water.

First, catch a fish, then gently insert the stomach pump down the fish’s throat and inject a small amount of water. Full back on the syringe and the contents of the fish’s stomach will be withdrawn into the pump-ready to be examined. Then you can offer other fish an imitation of your findings (what the trout are eating)-the key to matching the hatch.

If you cannot catch a trout, the stomach-pump method is obviously of no use. Instead, wade a closely as possible to the drift line of the natural insects-and look closely at the feeding trout rise forms to determine if the fish are taking duns (on the surface) or emergers (just below the surface). If the surface-riding duns are being ignored, and the rise forms appear amidst them, the chances are that the trout are taking floating nymphs or the emergers. As Yogi Berra noted, “You can observe a lot by watching”. It may be the most important advice you’ll ever use as a fly fisher.

Another method for stream identification of foods requires an insect net-a fine-mesh, hand-held net (can be purchased or hand-made) with stakes to hold the net in place in the stream. Push the net stakes into the stream bottom and hold the upright in the flow. Then kick the stream bottom just in front of the net with your foot. Another great option is a seine net that fits over you fishing net. Sci Fly Seine (link to amazon) is a great product that I’ve used on occasion.

Nymphs, larvae, and other bottom organisms will become dislodge and float into the net. Lift the net and scrape its contents onto your hand for examination. These organisms are the ones the fish are probably feeding on in the part of the stream. Select for your offering a nymph that is similar in length, color, and shape to the ones you see in your hand.

As Somebody in the “Know” About Which Nymphs to Use

A third option is to visit the local fly shop and ask what insects are hatching and what nymph patterns best match those insects. Many fly shops have this information posted outside their shop so you can get the information even if the shop is closed.

Guide Tip: If you see a guide floating by on the river, most are happy to say what they’re using.

Have a Fly Box of All-Purpose Nymphs

Bead or Non-Bead Head Nymphs? In making your selection of nymphs, keep in mind that bead-head versions can dramatically increase your catch rate onstream.

If you are fishing the “last inch” below the water surface and don’t want the fly to sink quickly, use non bead-head nymphs. If you intend to fish the middle portion of the stream or the bottom, where most fish lie, use a bead-head to help get the fly down.

Big trout and other freshwater gamefish usually lie near bottom and feed on large food items. You should always carry an ample selection of large nymph imitations (both weighted and unweighted versions), such as Woolly Buggers, Woolly Worms, and stonefly imitations for fishing the deeper pools, undercut banks, and runs.

You must get these large nymphs to bottom and fish them drag-free to be successful. (A woolly Bugger actively fished on a wet-fly swing is an exception.) During spring these large imitations, fished very slowly, can mean the difference between success and failure. A strike indicator helps you get a drag-free float and slow the fly in its drift.

Small Nymphs are the Mainstay for LOTS of Trout

Your small-nymph selection should include some basics: The Green Caddis Nymph (#14-#18) imitates emerging caddis pupae-important food items for trout, bass, and panfish. This nymph should be fished dead-drift in the surface film, but there are times when simply dragging it in the flow can produce explosive strikes. When caddis hatches are on, use this fly on the point of your leaded or as a dropper. (A dropper is a length of tippet attached to your fly or leader; you tie a second fly to the end of the dropper. See the nymphing rigs illustration on page 23.)

The pheasant-tail Nymph #14-#18), designed by Frank Sawyer, serves to imitate many mayfly nymphs. Thus, it can be used in different sizes as an all-purpose searching pattern, fished dead-drift on the point, under a strike indicator, or as a dropper attached to the hook bend of a dry fly. A small split-shot pinched on just ahead of the nymph helps it to sink quickly beneath the surface film. The Pheasant-tail -works well in still-water as well as streams, in relatively slow-moving water and fast.

The Hare’s-ear Nymph (#14-#20) is another all-purpose imitation that resembles many mayfly nymphs. It can be used as a standard nymph offering in both unweighted versions on most North American trout and bass streams (it has limited use in stillwaters). It can also be used in #16 or smaller sizes as a standard dropper fly fished beneath a well-hackled dry fly on riffle water, or a sparsely-hack-led dry fly on spring creeks. The Hare’s-ear Nymph is also a standard offering to be used beneath a strike indicator (weighted versions beneath large indicators and unweighted below small indicators).

The Hare’s-ear fishes well in mid-current and can be used to imitate rising mayfly nymphs by employing a slow lift at the end of the swing on slow-moving water in sight-fishing to large spring-creek trout. The Pheasant-tail Nymph is the standard fly used for this fishing method.

The Brassie is a deadly imitation of a variety of aquatic nymphs. It works particularly well in small sizes (#18 and #20), fished on long, this tippet to large, finicky trout feeding on Chironomids in Western lakes or clear, slow-moving spring creeks.

The Brassie is a favorite Western nymph/pupae imitation, but it has its uses in the East on Chironomid-rich streams. It works extremely well in sight-fishing to large spring-creek trout. On some slow-moving streams and lakes, Chironomids constitute over 70 percent of a fish’s food intake. Thus, this fly and other midge pupae imitations are important to your success.

Scuds and Shrimp are Great Nymphs for Weedy Places

Every fly box should have its selection of scud or freshwater shrimp imitations, ranging from olive to pink in color and in sizes from #14 to #18. In weedy still waters and slow-moving streams, these crustaceans are an important food item to trout, bass, and panfish. The nymphs should be fished dead-drift along weedlines or fired directly into weedbeds where the fish are “beating the brush” for them.

Stoneflies offer trout and bass the largest insect mouthfuls of the year. Because the nymphs are often large, big trout find stoneflies irresistible. These nymphs thrive in highly oxygenated water in fast-moving streams, so that’s where fish feed on them and it’s the place to fish imitations to match them.

K – Stone is an excellent pattern to match the large Western and Eastern stoneflies. The nymphs should be fished dead-drift using wet-fly down-and-across presentations to bump the fly along bottom. Fish expect to see stonefly nymphs dislodged from the bottom and drifting in the current. Strikes to these nymphs can be jolting, especially when the nymph is fished on a tight line in fast water.

Emergers, nymphs that have swum or floated to just below the surface film, are important to fly fishers. Carry no-hackle flies to imitate floating mayfly nymphs/emergers and duns on slow-moving streams where the fish have a good look at your fly. These flies float low in the surface film and can be fished as the nymph/emerger or as the dun, depending on how you grease them.

A little innovation can make the day for you. If you are fishing a no-hackle fly dry to imitate the dun you see on the water and the fish are not taking it, simply pull the fly into the surface film to fish it flush as an emerger. You can accomplish the same thing by trimming hackled imitations with your scissors to make them sink into the film, thus creating an emerger imitation. Often you’ll find that by trimming overly dressed flies, you can make them more effective as trout catchers, simply because they sink lower into the water’s surface, where the fish are feeding.

A small selection of soft-hackled wets can save your day, especially when you are fishing the near-surface on relatively flat water. These nymph/emerger imitations go back to the origins of fly fishing, but they are just as effective today. You can fish them greased as dry’s, ungreased as nymph/emergers, or on the swing as emerging nymphs. Dressed in relatively dark colors, they imitate most mayfly nymphs. They fish well during all stages of a hatch of both mayfly and caddis, on both streams and stillwaters.

Which Nymph Fly to Use During a Hatch

You need to think about the FIRST INCH under the water surface. There’s an old saying that trout take nymphs at the beginning of a hatch and duns during its latter stages. Forget it. Experienced fly fishers who use the stomach pump to analyze what trout actually eat during a hatch find a high percentage of nymph/emergers in their stomachs, no matter how many duns are on the water.

The fact is that trout find the emerging nymphs to be the most vulnerable food items, far more vulnerable to predation than fully-emerged duns. This is evidence that you should fish nymphs (or nymph emergers) as your near-surface flies of choice even during heavy hatches of duns.