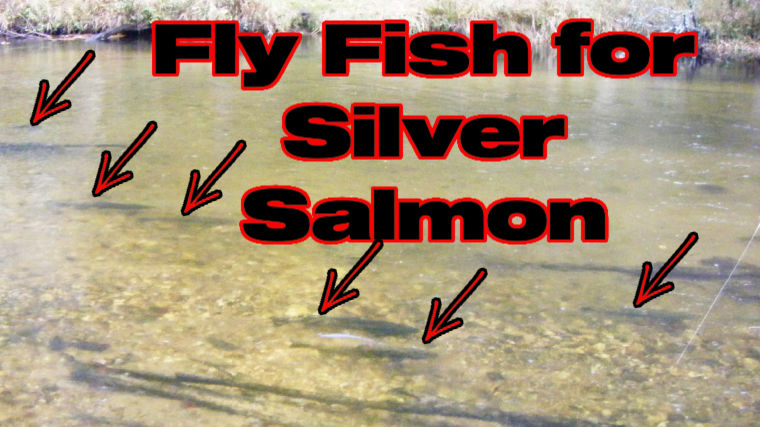 Silver salmon are one of those fish that it’s hard to get enough of.  Usually by March I’m planning an annual August escape.  Chasing salmon has become a pilgrimage for me just like that salmon returning to home waters.

I have ruined my life with this pursuit, with places both near and far, but throughout this tailspin I’ve never found anything as damaging to my position in civilized society a standing on the banks of a fine Alaskan salmon river and watching a full season’s worth of water slide by.

If a trip to Alaska to toss flies is in your future please read – Best Places to Fly Fish in Alaska https://guiderecommended.com/fly-fish-alaska/

Whereas most of the fisheries departments throughout the Pacific Northwest are struggling with shrinking habitat and tattered genetic remnants to re-establish the once great salmon runs, their Alaskan counterparts have habitat and fish in abundance.

The wide expanses of Alaska have not been immune from crimes against nature; but climb to practically any high ground throughout most of the state and you’ll see rivers that would be pointless, if not impossible, to be dammed, stands of cottonwoods and gnarly spruce that no lumber mill would want, and a vista that has changed little, if any, in thousands of years.

Spending a season in Alaskan and following the salmon runs is like participating in a great feast. Each month serves up a new course or two and dessert comes in August. August is a time of change along northern rivers and a hard month not to like. The fireweed that peaked with the run of kings still covers the gravel bars and islands and the tundra from green to gold. But best of all, August is the month when the silvers come back.

Like most camps setup for salmon fishing, we chose the location of ours with the same prerequisites in mind-protection from the wind, good water to land and park a plane nearby, and most important, not too long a boat ride to the salt. With such a location following the runs was easy. In early August our days began much the same-a little cowboy coffee to follow fillet of a sea-run Dolly of the remains of a duck that had chosen the wrong side of the river to fly down.

Within the first few days of the month the word was out, the silvers were beginning to turn in. Any further doubts were erased through the window of a Cessna 206 as we spotted good-size groups of coho in the lower reaches of the river.

Using an airplane to watch salmon runs was helpful at any time of the season. But with kings usually preferring the deeper water and sockeyes being practically everywhere when they’re running, it was the most useful for spotting they the slack spots and side pools the silvers preferred as all moved upriver.

With each high tide came another batch and the time of the season that everyone was waiting for had arrived. Here was a salmon whose aggressive personality seemed well suited to a body that had exploded with growth. Primarily three-year-olds, fattened by needlefish and herring, they had begun the year weighing about a pound or less and now averaged 10.

This astonishing growth rate indicated that very few creatures of edible size had ever survived the mistake of passing in front of a third-year silver. And the coho’s willingness to slam into a swinging bucktail was an obvious reflection of the salmon’s attitude toward baitfish. Although we had fresh fish entering the river throughout most of the month, our best days came when a crease through the mountains called Sunshine Valley failed to live up to its name and the planes were forced to other waters.

On those days the river was ours as we raced from one “bucket” of silvers to another to enjoy the 20-fish days. When we found silvers in undisturbed groups, getting them to take a fly was not only easy, but practically unavoidable. Even that first cast of the day-when a bushy pattern was having a hard time sinking-brought a swirl and a heavy pull. But as more fish picked up the fly as it danced past, their response became tempered with caution, and strikes came less often.

A typical 30-cast scenario into a fresh bucket of silvers: the first 10 casts produced five fish, the second 10 enticed two, and the last 10 casts took just a single silver. After that, switching to a smaller pattern and fishing it deeper and slower often convinced a few of the reluctant ones, but resting the water or finding a new group to work was a better choice. There were days when the run was at its peak, with fish constantly moving up the gravel bars and into and out of their chosen holding water.

On these days resting the water or alternating efforts between buckets was unnecessary. When fishing silvers, for those with the right equipment, the bite just doesn’t stop and better days on Alaskan salmon rivers may not exist.

I began my first silver salmon season with an 8-weight rod but a few thick 12- to 16- pounders soon convinced me that a 9-weight is a better choice, and anything less than a well-oiled reel with at least 150 yards of backing is a major mistake. My preference for lines has also undergone some change. With silvers usually holding in five to 10 feet of slow moving water as they move up the easier side water of a river, sinking/shooting tapers are useful. But I’ve found that a sinking-tip shooting taper often works just as well and still offers some line control lost with standard sinking lines. Sinking-tip heads also give silvers a good line to perform four or five clean jumps.