My first summer living in the Bighorn Mountains in Wyoming gave me a chance to experience my first ever cutthroat trout spawn. Walking along the banks of a spring-fed river seeing the active fish and beautiful red hue taught me more about trout behavior than almost every other fishing experience I’ve had. The fish take on a whole new personality, and exert all of their energy to reproduce.

While cutthroat trout always spawn around the same time of year, the exact day or week the spawn begins changes depending on a variety of environmental factors.

As the air temperatures warm, the water temperatures will follow suit. In early spring, the water is likely near 40 degrees, but by the time April or May hits, it’s generally right around the perfect spawning temperature. Bring a thermometer with you when you go fish in the early spring! It’ll give you a good idea about whether or not the fish are in the spawn or pre-spawn!

Stream flow is another big factor for spawning trout. In the spring, trout streams and river flows fluctuate with the snow melt. In warm years, the runoff can start as early as March. However, in cold years, that runoff may not begin until May! Trout won’t spawn in high and dirty water.

They want the consistent, cool and clear flows that are more common throughout the year. They don’t need extremely low water, but they often spawn somewhere between one foot and four feet of water. This makes the Redds extremely easy to see. Plus, the stream flow won’t be as strong in these shallower parts of the river.

How to Get Stream Flow and Temperature Data for Your River

So many folks don’t know about an awesome resource in the US. It’s call the USGS which has streamflow data for 1000’s of rivers and streams all over the US. I highly recommend checking your favorite river out 👉 HERE

You can almost guarantee that cutthroat are going to spawn in a portion of the stream or river with a gravel bottom. A muddy or debris covered bottom isn’t what they want. A gravel bottom is perfect because they can clean them, turn over rocks and lay their eggs. Plus, the shallow areas with gravel bottoms are generally extremely clean. A cutthroat trout Redd is generally the size of a bathtub, so make sure you’re aware.

Get the temperature and stream flow right and you’ve got a perfect recipe for finding Cutthroat Trout. It helps to have the right flies as well. Read my picks 👉 Flies for Cutthroat Trout

Highly oxygenated water is a must for trout regardless of their stage of life. To put an exact answer on the oxygen level needed, it generally needs to be more than 7 mg/L. Most rivers and streams have this when they’re right around 50 degrees. As the water temperatures warm, the oxygen levels decrease.

A highly oxygenated stream not only helps the trout survive, but it also allows for insects and smaller fish to grow at a faster rate.

How to Fish for Cutthroat Trout During the Spawning Season

During the spring spawning season, fishing for cutthroat trout can be hit or miss. It’s not always predictable, but when it’s on, it’s really on! It’s important to stay careful when fishing during spawning season. The last thing we want to do as anglers is interrupt the spawn or ruin any eggs.

Fishing the pre-spawn for all types of fish can be very productive. Plus, you get to throw streamers and larger flies for fish that are in a frenzy. Trout always sense when the seasons are changing. When seasons change, feeding habits change, and they’re likely looking to feast.

Before the spawn, stick with large streamers and egg patterns. Those egg flies are like candy to trout during the pre-spawn. They know the spawn is near, so if they start seeing egg representations, they’ll think it has begun. Spend time fishing in those gravel areas.

If you can find a shallow part of the water with gravel next to a deep pool, you’re in business. Fish will move between the Redd and the deep pool in search of food. Swinging a streamer through these sections is going to be too much for the trout to handle. They’re aggressive and looking to make the most of every single meal that they eat. Use somewhere around a size 4 and 6.

Do your best to entice the fish with your presentations. You want to give them a good amount of movement, so the trouts’ already heightened aggression is too much for them to ignore. Small twitches of the fly and quick strips are perfect.

If you’re throwing egg patterns, let them float as naturally as possible. You can high stick the flies through riffles and shallow pools. Make sure the fly is leading the charge. Be quick to mend and keep as little line in the water as possible. Some anglers choose to put a split shot above the eggs to get them a little lower in the water column.

During the spawn, the fish are even more temperamental. Their main focus is spawning, so they aren’t as eager to feed. However, if the meal looks easy, they’ll eat it. Their primary focus is to keep their eggs protected. They’re digging Redds, fighting off predators and fertilizing their eggs.

The biggest thing to remember about fishing during the spawn is to fish downstream of the Redds in pools and deeper water.

The fish in these areas are waiting for egg sacs to reach this portion of the river or stream. You don’t have to worry about intruding on any spawning activities when you’re doing this. Egg sacs are the best fly options during the spawn, but streamers still have the potential of being extremely productive.

Post-spawn fish may gather here as well looking for an easy meal. They don’t want to have to fight the current. They want something that falls naturally down current that makes for an easy meal. Take your time with your presentations. Pay close attention to your mends, and let your flies lead the way.

Is Fishing for Spawning Cutthroat Allowed?

When there is low light, they feel more protected, and are not as worried about being eaten by predators. The act of spawning is a very vulnerable activity, so the more they can do to keep themselves safe, the better.

Should You Target Spawning Cutthroat Trout?

Do not target spawning cutthroat trout. They’re weak and exhausted, so it’s not fair to these fish to coax them into eating your fly! We heavily depend on spawning trout to keep our cutthroat populations alive. Cutthroat populations are vulnerable! Since they spawn around the same time as rainbow trout, they can hybridize with them and become infertile.

Any healthy Redd with hatching eggs is valuable, so do your best to stay as far away as you can. By not even entering these Redds, you’re doing future generations of cutthroat trout and anglers a favor.

What is a Redd and What Does It Look Like?

A Redd is another name for a trout spawning ground. These are found throughout rivers and streams. Generally, they’re in a portion of the river or stream that’s a few feet deep and has a gravel bottom. Commonly, you’ll find them in riffles. They look like a bowl in the ground that’s created by a female trout slapping and writhing around. In the peak of the spawn, a Redd is usually the size of a bathtub.

Once the Redd is deep enough and suits the trout’s needs, they’ll begin to lay their eggs in it. These redds can be upwards of 15 inches deep! When walking near the water, look for a shade of red below the surface. These are the colors of the eggs clinging to the bottom or logs or rocks. Trout will turn over rocks and lay their eggs near them in hopes that they get stuck and are able to hatch here.

Please be careful if you do locate a Redd. The last thing you want to do is step on them. You have the chance to kill hundreds of fish eggs with a misplaced step. As anglers, we need to pay as close attention to the stream and river bed as possible during spawning season.

Will Cutthroat Trout Die After Spawning?

Cutthroat trout do not die after spawning. They’re not like salmon. However, a post-spawn cutthroat trout is exhausted, beat up and extremely weak. If they’re caught or attacked, they’ll likely die. Other fish know that cutthroat is vulnerable during this time of the year, so they’ll be lurking in hopes of attacking.

When cutthroat trout spawn, they dig and writhe around on the bottom while creating their Redds. This action wipes off the protective slime that usually covers these fish. As soon as this slime is wiped away, they’re susceptible to infections and parasites. This is another factor of the spawn that makes them vulnerable.

The spawning process can be confusing if you’ve never been able to experience it in person. Being able to watch it all unfold gives anglers a much better idea of what actually happens during this time of year. However, the time of year changes depending on where you are in the country.

Cutthroat trout in Montana generally spawn somewhere between March and May. The beginning of the spawn is usually dependent on the snowpack. If it’s an especially large snowpack, the runoff is going to last longer and keep the water temperatures low and levels high. Once this concludes, you can guarantee that the cutthroat are going to spawn. Again, make sure the water is right around 50 degrees!

In Colorado, the cutthroat trout spawn happens fairly early! Most of the time it falls between February and May. In February and March, snow will still fall, but the air temperatures begin warming. These fish want to spawn in water that’s somewhere between 45 and 50 degrees. If the river or stream doesn’t have a large spring that feeds it, the spawn will happen earlier.

In Wyoming, different cutthroat species spawn at different times. The Snake River Cutthroat will spawn starting in March and running through May. The Bonneville population won’t spawn until April and it will run through June. The Yellowstone strain of cutthroat trout are the last to go. This happens from May through July.

One More Cast to Cutthroat Trout

Cutthroat trout are one of the most unique species of trout in the world. Their unique features and vulnerable population make them a favorite for diehard trout anglers. Their early spawns are vital to the future of these fish, so make sure you pay close attention and are as careful as possible when fishing for them in the spring!

What Time of Year Do Cutthroat Trout Spawn? (Get the Timing Right!)

My first summer living in the Bighorn Mountains in Wyoming gave me a chance to experience my first ever cutthroat trout spawn…. 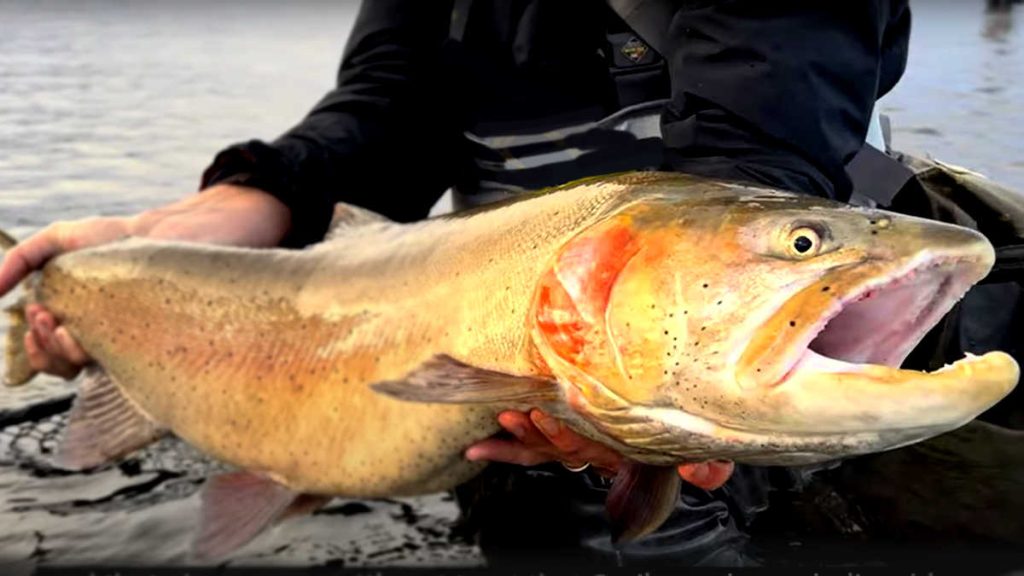 What is the Biggest Cutthroat Trout Ever Caught? (with Maps and Tips)

Many fly anglers have heard the stories of double digit brown or rainbow trout that can be found all over the world,… 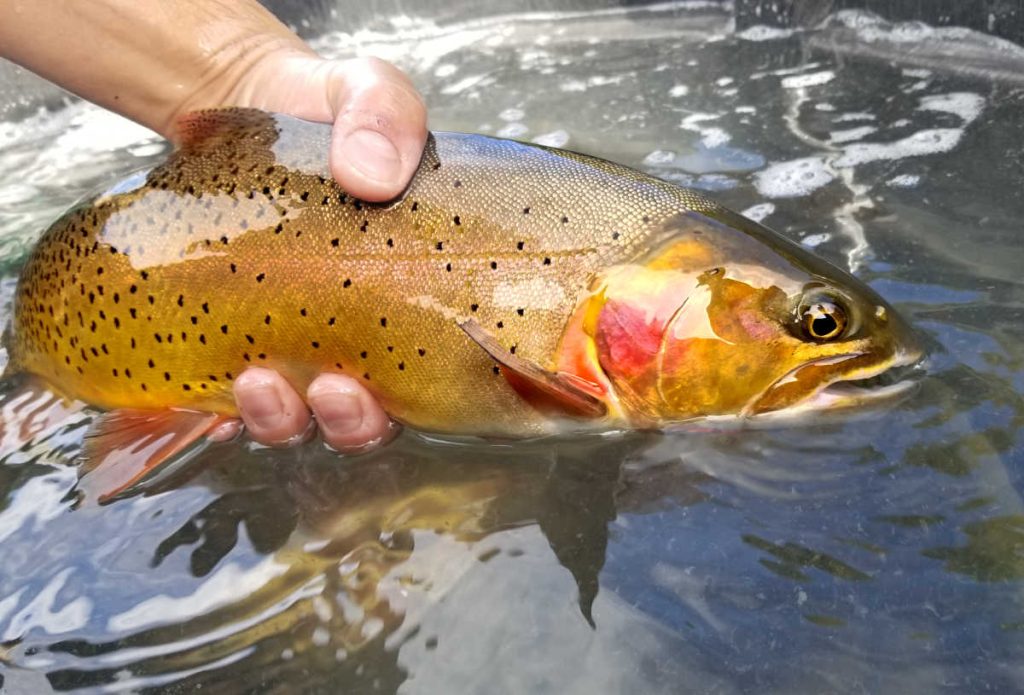 Cutthroat will always be the exciting, temperamental and fashionable fish in the trout species. My first experience with these fish were in…

Danny Mooers is a high school English teacher in Arizona with a love for fly fishing. Growing up in Minnesota gave him the opportunity to experience all types of fishing and grow his skills. After living out in the Western United States for several summers in college, his fly fishing obsession grew. Having the opportunity to share in his passion for fishing through writing is a dream come true. It’s a lifelong hobby and he strives to make it understandable for people of all skill levels