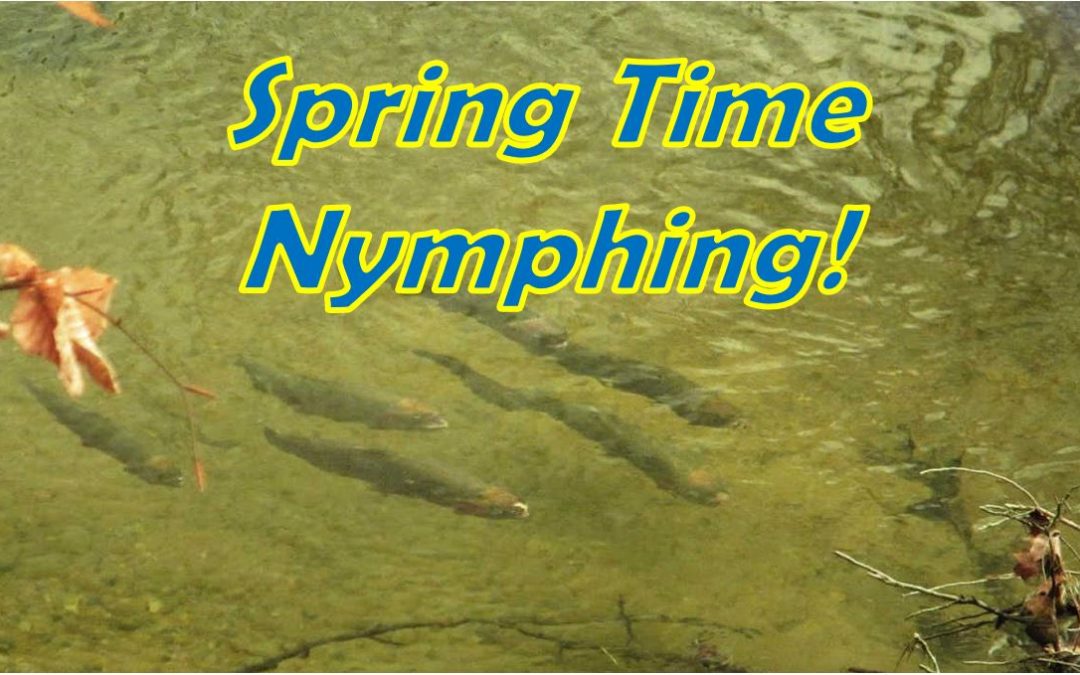 In spring, I usually forget about dry-fly fishing and plan to nymph fish to catch big fish. Water temperatures in most freestone streams are in the high 30s or low 40s. Smaller browns and rainbows can be found rising to midge hatches, but until the first active hatches start popping, I take larger fish on nymphs. Trout do feed heavily at times during the early season and their diet consists primarily of nymphs with some sculpins, dace, or other small fish. I’ve written this article about How to Fly Fish with Streamers if you’re looking to swing streamers.

Nymphs are the most abundant early-season food source for most trout, especially before the stonefly and caddis hatches occur. Catching trout with nymphs isn’t as tough as many anglers believe, and with a few basic techniques, even a beginning fly fisherman can catch many springtime trout.

Techniques for Nymph Fishing in Spring

Spring time nymphing success depends on three key factors: getting the fly down quickly and keeping it close to the bottom; fishing with a dead-drift, rather than a tight line or a retrieve; and learning to recognize a strike and react as quickly as possible to hook the fish. Getting deep. The best way to get down deep, and do it quickly, is to use a long leader with weight on it.

I like to use non-shiny removable split-shot (sizes B & BB), and I change weight often as I move from pool to pool so the shot just ticks the bottom of the stream occasionally on the drift. Normally, one or two BB split-shot is just right in conjunction with a moderately- weighted nymph.

Heavily-weighted nymphs do not react naturally to the current or look alive to the fish. The fly should ride slightly above the split-shot if possible, minimizing hang-ups. When casting slit-shot, use a slower, more open loop than you’d use to cast a dry fly. Remember, you don’t cast split-shot . . . you lob it.

Learn How to Drift your Nymph without Drag

Drag-free drift. A floating line and long leader are the ingredients for perfect, drag-free drifts. The long leader allows a floating line to ride the surface, while the smaller diameter monofilament cuts through the water with much less resistance. I use a 12-foot leader with a fluorescent butt section as the standard leader on all my floating lines, whether I use them for nymph fishing or dry-fly fishing.

Both Orvis and Rio sell colored tippets. You can read the reviews and check prices on Amazon with this link – Colored Tippet Spools

The 6-foot fluorescent butt helps me spot strikes more quickly by allowing me to watch father out on the leader for an indication of the strike. Seeing the strike and setting the hook. The most critical part of nymph fishing is detecting the strike and reacting to it. Good nymph fishermen develop a sixth sense and react to strikes that most beginners never see.

Use a strike indicator. Indicators have done more to simplify nymph fishing than anything in the past. There are a variety of indicators used today-from the light, fluffy, yarn indicators to large cork and polystyrene indicators that resemble bobbers.

Fish don’t hit nymphs hard, they just inhale them. Once a fish realizes it has been fooled, it may bolt in fright, but this is usually not the case. Most “takes” will look just as if you have hooked the stream bottom. First, the leader will slow down in the current, and then the line will slow down. Before it stops, the trout will usually have spit out your fly and be gone. You must react quickly.

Learn to strike just as you see your line, leader, or indicator start to slow down in relation to the surrounding currents. This is the key to catching good fish on nymphs. While learning to fish nymphs, strike at anything that is suspicious. Later, as you become more experienced, bottom hang-ups will become more apparent to you. Use as heavy a tippet as possible.

I often use 2X in fast pocketwater, but I may go down to 4X or even 5X if the water is clear and slow. Try to keep the tippet length between 12 & 24 inches, especially when you are using weight with the leader. Longer tippets actually reduce the percentage of fish hooked since their excess length makes it difficult to detect a strike and set the hook before the fish expels the fly.

Fish a short line whenever possible and learn to make an approach that will allow casting at close range. I often fish a nymph with only the leader and a few feet of line out of the rod tip. Wade close to the water you want to fish. This close approach allows you to control your line better and avoid cross current drag.

Cover the water and don’t put more than one cast in the same spot unless you want casting practice. An early-season trout will invariably take a nymph on the first cast that goes by its position, if the fly is presented with a good drag-free drift.

In the early season, when water temperatures are cold, trout often school together. Once you find them, you can often catch a half-dozen fish from one casting position. Learn to fish the drop-offs, the seams along the current lines, the pockets, and rocks. Look for good holding water along the edge of faster currents, especially at the head of a pool. In cold water, a trout’s metabolism is slow, and it can’t afford to expend the energy necessary to hold in faster water where you might find it during the summer months.

A trout must find a holding spot in relatively slow water, but one adjacent to a feeding lane where it can move out into the current to pick off a hapless stonefly nymph or other juicy morsel.

I don’t think it’s critically important to match a particular nymph pattern down to the leg joints in order to be a successful nymph fisherman. Most good impressionistic nymphs work well if they are presented properly. Stonefly nymphs are always a good early-season pattern for many Western and Eastern freestone streams.