How to Select and Use Fly Tying Scissors [with Video] 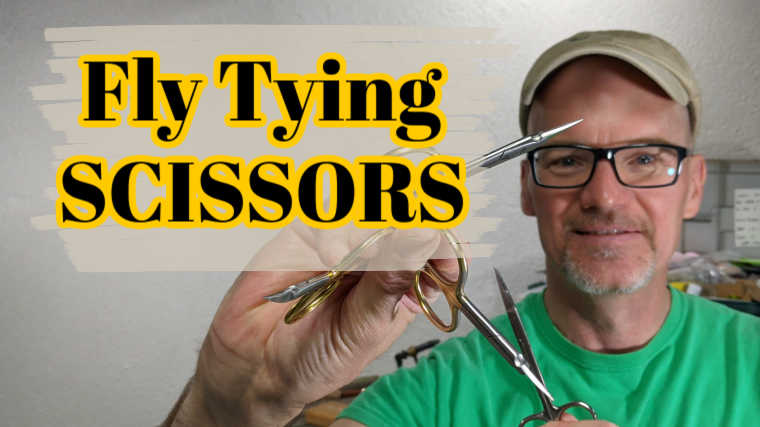 In the world of fly tying, simple tools and procedures often go overlooked. Quite a bit of the process is complicated and requires extreme focus. When mistakes happen, we want to make sure that nothing goes wrong with tools like the bobbin, hair stacker and especially our scissors. You need to have at least one pair of scissors specific to fly tying! It’ll make your life easier and the process much more efficient.

Fly tying scissors are created to handle some extremely small and fine thread. Anglers often skimp in the scissor category because they think they have something lying around the house that will do the trick. This is rarely the case! Even medical scissors have their limitations.

Fly tying scissors have several aspects that will make your life easier. First, they’re comfortable. It’s important that fly tying scissors are comfortable because you need to be able to maneuver and operate them in delicate situations. Next, the entire blade is sharp and it cuts well. This is a feature that’s often not even worried about because most “normal” scissors only have a portion that’s sharp.

Important Things to Look for in Fly Tying Scissors

The next decision to make is whether or not you want a short vs. a long blade. You can find them from .5 inch or 2 inches. The shorter the blade, the smaller and stronger the cut. These are great for feathers and thread. Long blades aren’t as strong, but they can work well if you need to make some longer cuts.

Straight and curved blades is another decision that needs to be made after the length of blade. The curved blades are great for precision cuts! However, they won’t work for all types of cuts. You need to have a straight blade if at all possible.

At the end of the day, it’s not a bad idea to own multiple pairs of scissors if possible. You’ll find use for all of them.

Having a normal pair of “house” scissors in your kit is smart. You may need to cut a stem off of a feather or something thicker that’s better handled by a traditional form of larger scissors. Otherwise, fly tying scissors should be used.

When it comes to making cuts, less is more. Don’t feel like you have to make the entire cut at once. You can section it out or use multiple pairs of scissors to make the cleanest cut possible.

Feel free to adjust the tension. The tension point is right at the pivot in the scissors. Most fly tying scissors have an option for you to adjust the tension to exactly how you would like. A tighter tension is going to allow for more solid cuts and trims. A relaxed tension is sometimes preferred by very experienced fly tiers. Again, this is all down to what you would like! The more experience you gain, the stronger preference you have.

Cutting takes quite a bit of practice! Don’t feel stressed or get discouraged if you’re not able to be as precise or delicate as you would like. Start by practicing on some of the material that isn’t tied to a fly. You don’t want to create a really nice-looking fly and then mess it up with a poor cut.

Dr. Slicks has a great set of razor fly tying scissors. You can find them on AMAZON to check the reviews and current prices. Here’s a link – Dr. Slick Razor Scissors The razor scissors are a wonderful option. They’re very sharp and work with almost every type of cut you would like to make. They essentially have razor blades on the end! On top of it all, you have an adjustable tension that allows you to have a little say in how things cut.

The Dr. Slicks fly tying kit also has a nice pair of all-around scissors that will perform in almost every situation you need. Get the lit like I did on Amazon here’s a link – Dr Slick Fly Tying Kit