How to Select the Correct Size Fly Fishing Reel 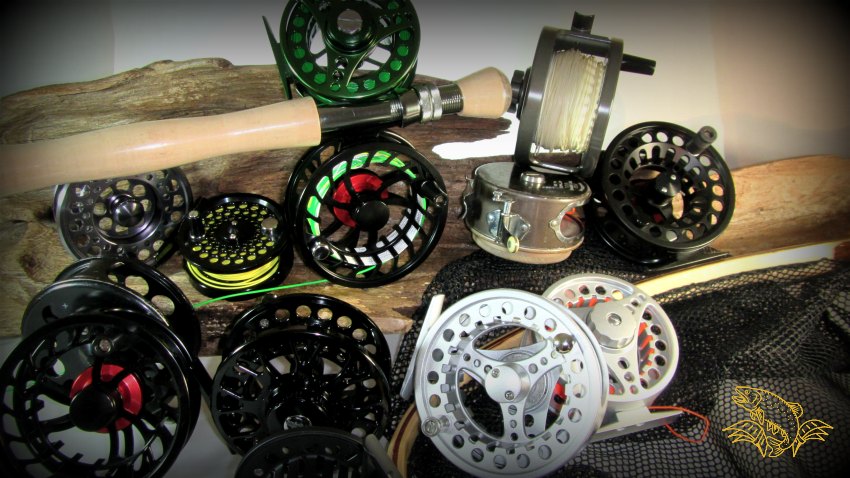 There’s no mathematical formula at least one that I’m aware of to help you select the correct size fly fishing reel. Instead, I recommend taking more of a Goldilocks approach to fly reel selection.

Here’s what I mean:

Eventually, you’ll come to a reel that feels just right. That’s the one you want.

Now, while you can buy a fly reel based solely on feel, there are some other factors to consider to ensure you get a reel that’s sized according to your specific needs as an angler. And in this article, I’m going to walk you through everything you need to know. First, let’s talk about line weight.

A one-size-fits-all fly reel doesnt exist. Practically all fly reel manufacturers offer fly reels for specific line weights. The reason for this lies in the fact as a fly lines weight increases, so does its diameter a 9-weight fly line is much thicker than a 4-weight fly line.

And the thicker a fly line is, the more space it occupies on the reel.

Since there isn’t that much of a difference in diameter between next-door-neighbor line sizes, reel manufacturers can get away with producing five different versions of the same reel instead of nine.

For us anglers, buying a reel that works with two or three different line sizes can be a real money-saver if you own multiple rods within that range. Let’s say you own a 4-weight rod and a 5-weight rod. Instead of buying separate reels for both, you can buy a Redington Behemoth in the 4/5 size, order a second spool and line, then simply swap out the spools depending on which rod you want to fish that day.

Are you looking for a way to capture that special moment on the river? Consider getting a personalized fly box from River Traditions. Here’s a link -> Personalized Aluminum Fly Box

In short, start your reel buying process by finding a reel that’s designed for your rods designated line weight most reels are clearly labeled.

If you stop the reel selection process here, however, you might not end up with the exact right fly reel for your needs. The next question to ponder is . . .

What Fly Fishing Reel Do I Recommend?

I have been super happy with the durability, value and quality of the TFO BVK Series of fly reels. I bought mine on Amazon, it was delivered in two days. If you’d like to check out the prices here’s a link – TFO BVK Series Super Large Arbor.

If you’re just getting into the sport, you may not be aware that a fly line on its own does not complete the system. Most fly lines come out of the box at a standard length of 90 feet, which in most cases is enough length to play and land fish. But, if you hook into a strong, fast-running fish, every inch of line will race off the reel leaving you spooled, as they say.

Fly line backing, a thin-diameter braided line, is an insurance policy of sorts for those fish that run, run, run some more, and don’t stop running. Backing goes on the reel first before the thicker fly line is attached, and ideally, you want to add as much as the reel will hold. You can read all about the different types of fly line backing in this Article – What is Fly Line Backing.

I have a serious deal going, get a 3 pack of tapered nylon leaders for less than $5. Link to deal -> River Traditions Tapered Leaders

Exactly how much backing you need depends primarily on the size and strength of fish you’re targeting. Here’s where reel size comes into play and where looking at the specs of different models is important.

You’ll find that reels with the same line weight designation but from different manufacturers (or different models from the same manufacturer) have different sized spools, and therefore hold different amounts of backing.

So, when you’re comparing reels side-by-side, think about the type of fish you hope to catch. Are they lightning-fast bonefish? Get a bigger reel. Are they dinky little brookies? Get a smaller reel.

For a more detailed explanation on how to clean and maintain a fly fishing reel watch a video I put together.

Finding a Reel Size that Balances Your Rod

The first two parameters I covered line weight and line capacity should narrow down your reel search significantly. Your next task is to find a reel that balances your rod.

Ideally, the rod will be perfectly balanced atop your index finger, remaining more or less parallel to the floor. This will give you the best casting and line control performance with minimal arm fatigue for long days of fishing.

If the tip of the rod dips toward the floor, the reel is too light. A tip-heavy outfit might not seem like a big deal in the fly shop, but on the stream, will be a constant source of annoyance, will rob your casting performance, and could lead to increased arm fatigue.

If the butt of the rod dips toward the floor, the reel is too heavy. Your reel needs to have some weight to it to balance the rod, but too much weight could also give you casting problems and arm fatigue from throwing around that extra heft.

While this simple balance test will give you lots of good information about a particular rod and reel pairing, try to do some actual casting with the reels you’re testing. That’ll give you a better idea of how the combo will perform in real fishing scenarios.

Again, no exact science here. Go with what feels right.

What is the Arbor Size on a Fly Reel?

The arbor size of a fly reel refers to the diameter of the reels axle AKA “the arbor”. In other words, the arbor is what the line is wrapped around. While it might seem insignificant, arbor size has a huge influence on reel performance and should be high on your list of considerations.

Before I get into the specifics of small, mid, and large arbor fly reels, let’s look at how arbor size affects fishing performance:

For a long time, all fly reels had small arbors by default. Small arbor reels are still available and are considered more “classic” or “traditional” than the other options I’ll get to in a minute. Most click-and-pawl reels have small arbors, and while they don’t offer the same advantages of reels with larger arbors, get the job done when fishing for quarry that doesn’t put up much of a fight.

The main issues with small arbor reels, as alluded to previously, are slow line pickup rates, increased line memory, and inconsistent drag pressure. Basically, if you’re at all worried about reel performance, don’t get a small arbor reel. However, thanks to their overall smaller size and lighter weight, small arbor reels pair well with your most delicate fly rods used to catch little fish, think about fly rods designed for line weight 1s, 2s, and 3-weights.

It’s widely held that the advent of large arbor reels is perhaps the greatest advancement in fly fishing reel technology in recent history. ll the problems that arise from small arbors are almost entirely solved with large arbor reels:

Mid arbor reels offer many of the same benefits of large arbor reels, though not as prominent. One potential upside to mid arbor reels is an increase in line capacity, providing room to hold extra backing. If that’s something you’re interested in, check out the ever-handsome Hatch Finatic reels, available in both mid and large arbor versions.

The difference between CNC and die-cast reels is a matter of materials and manufacturing processes.

A CNC machined reel is carved out of a solid chunk of bar stock aluminum by a Computer Numerical Control (CNC) machine. This is how the top tier of fly reels are made today, producing some of the strongest, most durable reels on the market. After the reel components are carved out, the aluminum is then anodized making them corrosion-resistant for use in saltwater and other harsh fishing conditions.

Die-cast reels, on the other hand, are made by pouring or injecting molten metal alloy into molds or dies. Considerably less expensive to produce than CNC machined reels, die-cast reels are some of the more budget-friendly options available, and depending on the brand, offer a decent level of durability. Die-cast reels can’t be anodized, however, so exposure to saltwater could result in corrosion.

How to Remove the Spool on a Fly Reel

Every reel is slightly different, but here’s the basic procedure for removing the spool from a fly reel:

That’s about all there is to it. Remember this procedure next time you need to swap out spools or remove one for a deep cleaning.

You can read about how to maintain your fly reel in my article – 11 tips for taking care of your fly fishing reel.

While there is a lot to think about when choosing a fly reel, don’t get bogged down in the minutiae. As long as you choose a reel that’s designed to work with your rod’s line weight, offers enough line capacity to hold plenty of backing to tame your quarry, and balances your rod in a way that feels good to you, you’re all set. Take it a few steps further by looking at arbor size, materials, and durability, and you’ll be well on your way to a rod and reel combo you’ll love fishing.