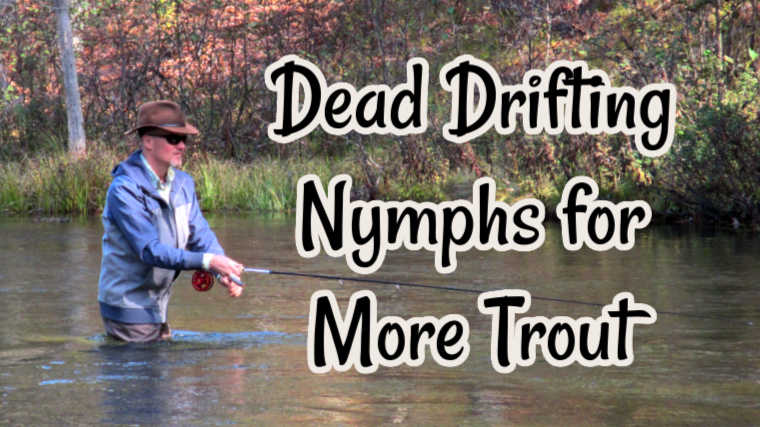 It has been often said that trout spend as much as 90 percent of their feeding tie eating aquatic invertebrates that are drifting in the currents below the surface. If you want to catch more trout on flies, you must be able to fish nymphs on dead-drift.

Nymphs often work better than dry flies, especially in spring and early summer when the water is usually colder, higher, and colored. The tactics given here work well year-round but especially early in the year and when there are no hatches.

Sometimes a nymph is just like a dry fly. During a hatch, when an emerging nymph or pupa halts in or on the surface film before emerging as an adult, the insect is subject to the same drift patterns as a fully emerged insect (the dry fly).

Tactics such as the puddle cast, reach mend, and parachute mend are vital to eliminating drag when you present a dry fly. They’re just as vital when you fish a floating nymph.

Fishing a floating nymph, like fishing a dry fly, is two-dimensional. The angler need only contend with drag on the surface. Fishing a nymph dear-drift beneath the surface is three-dimensional. Not only must you be concerned with drag across current and upstream or down-stream, but also with drag that can change the depth of the fly.

Making the transition from two dimensions to three dimensions is not difficult. Because the currents just under the surface are essentially the same speed as those on top, fishing the nymph dead-drift a foot or so down is really no different than fishing a floating nymph. The tactics and equipment are the same; just change the method used to detect the strike. With a dry nymph, the angler sees the fish rise. But with the sunken fly, this visual clue is missing, so you need to create visual clues at the surface. Here are two ways to do this.

The first way is the “greased leader tactic.” After tying on a nymph, use a paste-type fly floatant to grease the leader to within a foot or so of the imitation. Be careful not to get floatant on the fly. When the cast drops to the surface, the fly will sink, but the greased leader will not. The floating leader not only buoys the fly and prevents it from sinking to deep, but serves as a strike indicator as well. If a fish intercepts the nymph, the floating leader will be sharply pulled under. This technique works superbly with any small imitation, such as a mayfly nymph, midge or caddis pupa, or wet ant. It is especially good in lakes and streams where the surface is smooth and the track of the leader can be easily seen.

The weight of imitations larger than a #16 will often pull the greased leader under, and in choppy water the leader in hard to see and often gets swept under by the waves. In these conditions, add a strike indicator to the greased leader to help keep the system afloat and to aid strike detection.

The trick to strike detection is to watch the indicator’s speed relative to the current. A wave may momentarily swamp the indicator, but its speed will not change abruptly. However, if a fish takes the fly, the indicator will pause or dart upstream. Sometimes the pause is quite subtle. If you see even a hint of hesitation, set the hook.

Strike indicators are also useful when you are dear-drifting a nymph along the bottom. The distance between the indicator and the fly should be about twice the depth of the water.

Sometimes in deep fast water, a heavily-weighted nymph dragging along in the slower bottom currents will pull an indicator under, and you’ll lose sight of it. In this instance, use two or three small indicators instead of a single one.

Place one where the tippet joins the leader, one where the butt and tapered sections join, and one midway on the butt section. When the first one sinks, watch the second one, and so on. Multiple indicators also allow you to see the position of the leader relative to the line, and thus help you to see nay drag on the leader.

You can also use a buoyant indicator to control the depth of the fly. Set the indicator so that when it is at the surface, the fly drifts a few inches above the bottom. When the fly gets too deep, it will pull the indicator under. A lift of the rod tip can reposition the indicator back on the surface and put the fly at the correct depth.

Since currents at the surface are faster than those near the bottom, a floating line tends to go faster than the fly, causing drag that keeps the nymph off the bottom. There are three variables you can adjust to get the fly down and keep it there: the dressing of the pattern, the equipment, and the method of presentation.

Many anglers avoid using weighted nymphs, but in deep or fast water, they are essential for fishing near the bottom. Charlie Brooks called his big weighted nymphs “quarter pounders”-and with good reason; they were weighted with 20 to 30 turns of lead wire wound on the hook before the body was tied. They had the glide path of a brick, but they surely did sink nicely.

Getting the Weight Right When Dead Drifting Nymphs

Weighting the hook is not restricted to big flies; it works well on flies as small as #20. Using highly absorbent material such as wool yarns or hard materials like wire or flat monofilament for the fly body helps the sink rate.

As in the dry-nymph tactics, a leader with a long tippet (four feet or more) is very important for fishing near the bottom. The tippet’s thinness, compared to the rest of the leader, allows the weighted fly to sink rapidly and dribble along the bottom like a dislodged natural. To give the leader the strength to turn over weighted nymphs, however, use a butt section with a diameter of .018” or .020.

In heavy currents, it is often necessary to add extra weight (split-shot, twist-on strips, or moldable putty) to the terminal portion of the tippet to get the fly near the bottom and hold it down against the drag of the fly line. Adjust the weight so that the fly “ticks” bottom every foot or so.

Most dead-drift nymph fishing is done with a floating line, even when fishing near the bottom. Riding high on the surface, the fly line serves as a visual reference that helps you keep track of the relative position of the fly. The line can also be mended as needed to correct drag problems. In addition, the floating line offers the least resistance of any line when you strike a fish. This is especially important when using small flies on light tippets.

In deep or swift waters, it is sometimes necessary to use a sinking-tip, or in extreme cases a full sinking line, to get the fly down. The sinking-tip line is useful when you want to bottom-bounce egg patterns for trout and salmon, or when you want to get a big stone fly to the bottom of a deep pool. Don’t use tippets lighter than 3X when you fish with these lines.

Using the correct cast can help sink the fly and allow it to drift along the bottom. When you are fishing upstream, use slack-generating casts like the puddle cast or tuck cast. The tuck cast was developed to fish small nymphs like the Pheasant-tail nymph. It is essentially a curve cast made in the vertical plane.

Aim the forward cast six to eight feet above and parallel to the surface. Stop the rod hard at the end of the forward stroke. The hard stop will cause the weighted fly or split-shot to flop over after the line straightens, tucking the fly down under the line and creating a great deal of slack as the line drops to the water.

Casting and Drifting a Nymph

When you are fishing across stream, use a reach mend or curve cast to get the fly downstream of the line and leader. Then mend the line as necessary to keep the line from getting downstream of the fly and dragging it back to the surface. Keep your casts in the 20- to 40-foot range, and use an indicator or two. Fishing a nymph downstream is another effective way to dribble a fly over a sharp drop-off in the stream bottom. Use a strike indicator or two, and cast down-and-slightly-across with a parachute mend. Keep the cast short-less than 25 feet. Then drop the rod tip to feed the line out just fast enough so that it doesn’t get downstream ahead of the indicator(s).

Are You Looking for More Ways to Nymph Fish?