What Is False Casting in Fly Fishing? 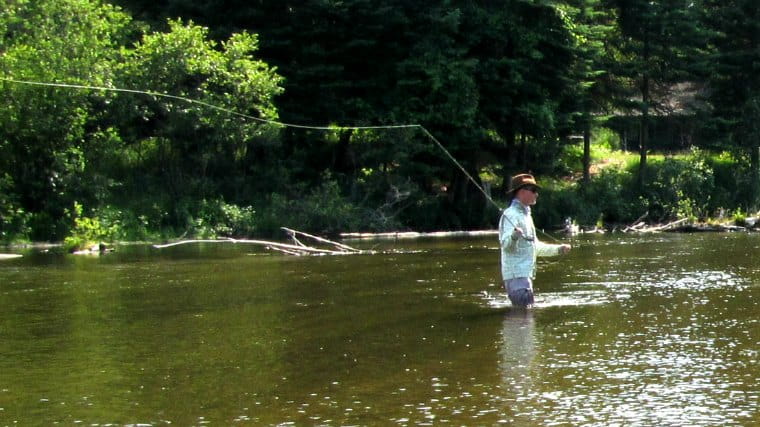 The mechanics of casting a fly rod is fairly simple: weighted fly line is used to create momentum through false casting. That momentum is used to bend the fly rod, which propels the fly forward and onto the water when the fisherman decides to actually cast. But, while simple, that definition may leave you with a question.

What is False Casting and why do fly fishermen do it?

False casting is the repeated forward and backward rod motion that occurs while a fly fisherman is casting. During a false cast, the fly line never touches the water.

When do I use a False Cast while fly fishing?

Most fly fishermen start off their casting training with the roll cast. The roll cast is a highly useful, simple to learn but difficult to master cast that minimizes the opportunity for you to get your fly stuck in whatever tree, bush, or fly fishing buddy who is behind you. (We’ll talk more about the roll cast and its uses in the future.)

But, as you progress with your fly fishing experience, you will begin to experiment with traditional casting to add distance and accuracy (and to look more badass). The traditional method of casting a fly rod requires false casts for a number of reasons (besides looking more badass).

Work Line Out of Fly Rod with a False Cast

False casting’s primary purpose is to get more line out of your rod and into the air, allowing you to cast further. As we mentioned earlier, the repetitive act of false casting builds momentum within the rod. This momentum is used to incrementally increase the distance of each false cast until the fisherman is ready to actually cast the distance he desires to reach.

For example, imagine a fly fisherman who is attempting to cast 50 feet. To cast 50 feet, obviously he’ll need to launch 50 feet of the line of out his rod.

He now has 20 feet of line out, which means he probably needs another false cast. So he quickly brings the rod over his shoulder again, and again catapults it forward. This time, he lets out about 15 feet of line. After two false casts, he now has 35 feet of line in the air, and he’s ready to cast.

One last time, he quickly brings the rod over his shoulder, extending his fly line 35 feet behind him. With the line still in the air, he swiftly flicks the rod forward once more, and releases the last 15 feet of line. The fly he was casting lands on the surface of the river 50 feet in front of him, drifts for a few moments, and is then inhaled by a 24″ brown trout.

Fly fishermen also use the False Cast to change the direction in which they are casting.

Say you’re fishing in an alpine lake that’s filled with trout. You’ve been working your size 14 blue-winged olive in an area in front of you for the past 30 minutes because you see a at least twenty 12-inch brookies hanging out, so of course, you haven’t caught a thing.

Then, out of the corner of your eye, you see a shadow in the shallows- a bright red mass effortlessly sweeping the area, with stripes down its back. It’s a Tiger Trout and it’s at least 18 inches.

But you’ve got 30 feet of line out in front of you, and the fish is 90 degrees to your left. Good thing you read this article, so you know how to false cast to change direction.

You strip in your line until you’ve got just 15 feet out, and then quickly throw a backcast over your shoulder. With the line still in the air, you false cast forwards, about 30 degrees to your left. You repeat your false cast once more, and rotate another 30 degrees. At this point, you see that the tiger trout has now grown to 24 inches. So you bring your line back for one more backcast, then point your forward cast directly at the fish, finally laying down your line.

Your fly lands 6 feet in front of the fish, he inhales it, and you land him. Unfortunately, you didn’t bring your net with you, so you can’t get any good pictures. People will just have to take your word for it when you tell them he was a 30-inch Tiger.

False casts can also be useful for accounting for casting errors without spooking fish. This is especially useful when you’re casting at a fish that you can see, or when you’re trying to land your fly in a very specific spot.

If you’re trying to drop a fly directly in front of a fish, into a bucket, or onto your fishing buddy’s hat, you’ll need to do a couple of false casts to accurately gauge your aim. If your first false cast towards your target seems off, do it again!

Can I False Cast Too Much?

So the natural consequence of my last point is that people use the false cast entirely too much, which is a problem.

False casting, while less disturbing to fish than flopping your down on the water, can still scare fish away. Trout have their eyes pointed up all the time, and when they see a bright flash of fly line streak across the sky, they view it as something weird. To trout, something weird could be an eagle, an osprey, or a heron, but no matter what they think it is, they won’t like it.

Trout who see fly lines flash above them will get spooked, and it’s the older and bigger fish that will be the most aware. So, false cast as much as you must, but keep it to a minimum, especially on sunny days or when fishing crystal clear water. I like to make one or two false casts at most if I’m casting over an area with fish.

Another use of false casting is to pick up your fly line while you’re moving. If you’ve got 30 feet of line out and want to move 10 yards upriver, you don?t have to reel all that line in just to walk there.

Instead, you can bring in 10 or so feet, and just false cast while you walk. The line is much easier to transport that way.

Does False Casting Dry My Fly?

When fishing with dry flies, one of the quickest way to keep your fly dry and floating on top of the water is to throw a few extra false casts between actual casts. Just whip that sucker around a little bit, while making sure you’re not false casting over any fish.