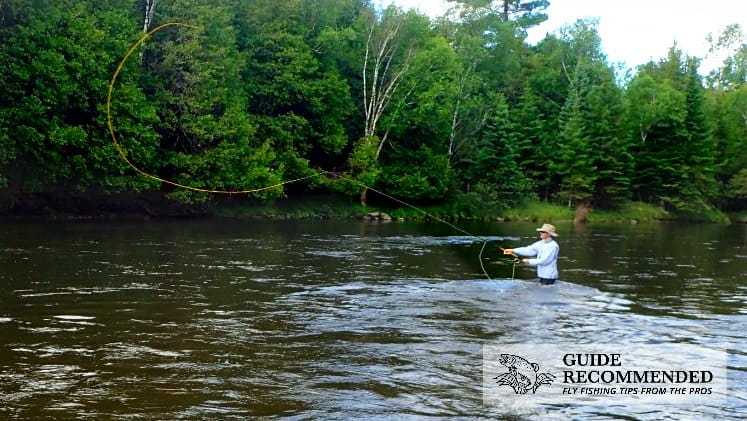 You don’t need to be a fly casting champion to catch trout with nymphs. Since many nymphing opportunities come at close range, a simple lob is all that’s needed to deliver flies to their mark. However, as you start adding multiple flies, split shot, and strike indicators to the end of your line even the most basic casts can become a challenge.

1. Open Up Your Loop

Tight loops are essential for casting long distances and punching flies through cross-winds. But when you’re fishing nymphs with lots of weight, there’s a high likelihood your rig will collide with itself if the loop is too tight. To give your leader plenty of space to unfurl, an open loop is key.

Open casting loops occur when the tip of the rod travels in more of an arc than a straight line. In practice, this added arc is achieved by simply relaxing the casting stroke just dial down the intensity of your movements and let the rod travel back slightly farther than normal to roughly the 2 o’clock position.

2. Move Your Rod Along A Single Plane

Any side-to-side or up-and-down rod movements throughout the cast will be reflected in your airborne fly line, creating further opportunities for self-collision. This action is especially pronounced if your rig involves droppers that can swing and twist around other parts of the line.

The solution is to keep your rod moving along a single plane throughout the entire arc of the casting stroke. Watch your rod tip as you perform the cast, and correct any zig-zag type movements to keep the line moving nice and straight.

Stutters, twitches, or untimely pauses will also result in zig-zag line flights, collapsed loops, and other frustrating casting maladies. Avoid the struggle by making a smooth, powerful casting stroke. You can’t just whip your rod back and expect your leader not to foul. The movement must be dynamic. Not heavy-handed and not too weak when you strike the right balance, it’ll feel like the rod’s doing all the work.

4. Stop Your Rod Abruptly at the End of the Back Cast

If you don’t stop abruptly, the power is zapped from your cast and your loop will likely collapse. This is undesirable when making any cast, but especially so with multiple flies and lots of weight when tangles are compounded.

Instead, when you make a crisp stop at the end of your smoothly accelerated backcast, the energy stored in the rod can transfer to the line as efficiently as possible.

Lots of casting problems with heavy rigs occur when the pause before making the forward stroke is cut short. Moving the rod forward prematurely creates a bull-whip-like effect, cracking the leader at the end of the back cast. Sometimes, the flies snap off completely.

Before you initiate the forward cast, you must wait until all the line has unfurled behind you. During this pause, the rod should be held firmly in place. As the line shoots back, you’ll feel the rod bend as it re-loads with energy from the line becoming ready for the forward cast.

6. Finish Your Forward Cast with a Kick

To seal the deal on a tangle-free cast, make a quick single haul with your line hand just before the flies touch down. This maneuver causes the leader to hinge and kick over, catapulting the flies over and into the water.

If you need a little extra “kick” to turn over your leader and flies, replace the single haul with a more pronounced rod tip lift to perform the Tuck Cast as outlined in “Essential Casting Techniques to Master Nymphing.”

You should already be keeping your false casting to an absolute minimum, but you may also consider ditching back casts altogether. Instead, keep your flies in the water where they’re significantly less prone to tangles, and use either the roll cast or the downstream water load to shoot your flies back upstream.

Your cast will feel more like a lob, but that’s okay you’ll be so busy catching fish, who cares what your cast looks like!

Related Articles and Some Other Fly Fishing Tips

You have got to see when fly fishing. Polarized sunglasses cut down on glare and stop flies hitting you in the eyes. Read about the sunglasses I love in Recommended Sunglasses for Fly Fishing

Nymph fishing is super effective. Learn the basics then build on your skills and the setup. Read about The Traditional Nymph Fishing Setup.

Just starting out in this amazing sport? Read about the gadgets and accessories in this article. Fly Fishing Checklist for Beginners.