What is the Biggest Salmon Ever Caught? (with Maps and Tips) 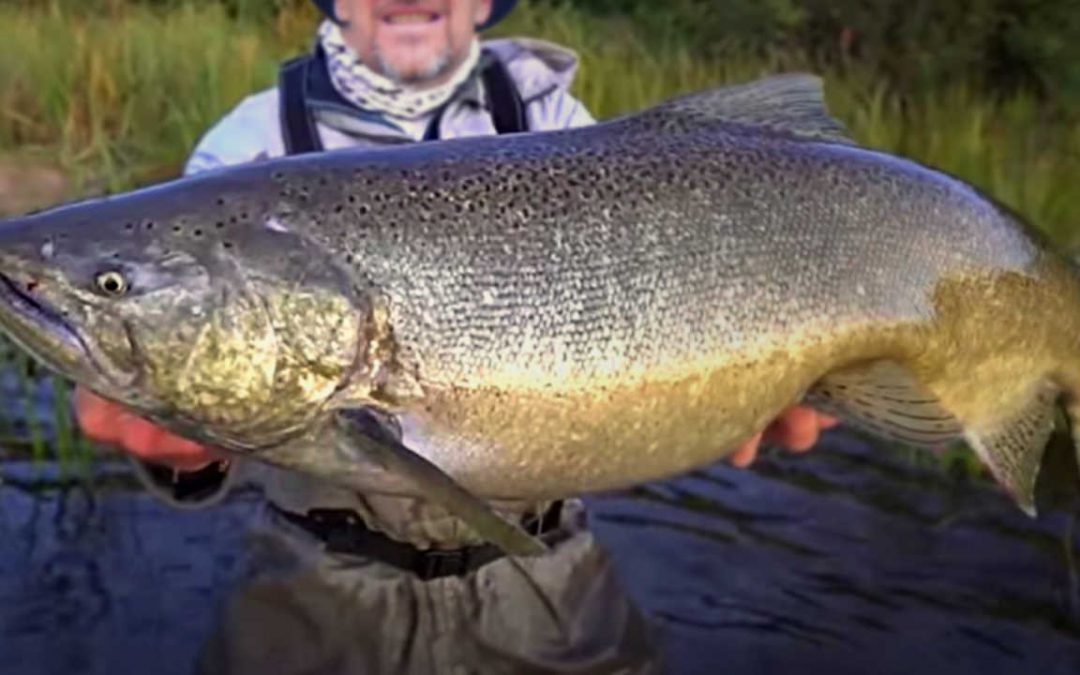 Salmon are considered by many to be the golden child of fly fishing. They’re often found in remote parts of the earth in the midst of bear country and towering peaks. The variety of species of salmon all fight hard and provide anglers with an experience unlike any other.

Until anglers target these fish, it’s hard to understand how remarkable they are. The acrobatic leaps, aggressive strikes and frustrating antics seem to change on a daily basis. One can never quite figure out these fish and salmon try to keep it that way.

The Biggest Salmon in the World (According to IGFA)

Despite the several species of salmon available to be caught, the King or Chinook Salmon reigns supreme. These are the least common salmon species, but they grow larger than all of the others. These beasts are often found on the west coast of the United States and Canada.

The world record was caught in the Kenai River in Alaska in 1985. This monster weighed in a 97 pounds and 4 ounces. This record has held for nearly 40 years and shows no sign of giving up its place on the leaderboard. To land a nearly 100-pound fish out of a river is difficult to imagine. It was over 5 feet long and can be seen at the Soldotna Chamber of Commerce!

A Little Bit About Salmon

There are six different types of salmon that anglers can find. They are anadromous so they’re born in freshwater, move to the sea and return to freshwater to spawn. They’re predatory fish so the majority of strikes anglers get is out of aggression.

These fish rely heavily on the health of the water and river. If the ecosystem deteriorates, the population of salmon is going to deteriorate. For example, as more rivers get dammed, the more difficult it is for salmon. As a result, salmon ladders and other provisions have been put in place to create a more friendly environment.

These fish can range anywhere from 3 to 30 pounds on average. Depending on what species you’re targeting, you’ll be able to land some monstrous fish.

Where Can I Find a World Record Salmon?

The Campbell River is an extremely unique fishery. You’ll have access to Chinook, Chum, Coho as well as Pink Salmon in these waters. You struggle to find as productive or healthy fishery anywhere in the world. Since this river is only 4km long, you’re going to have to be selective in where and how you target these fish, but you have an amazing shot at a trophy.

Plus, this river is located on Vancouver Island which happens to be a prime vacation location. If you’re already planning on heading out west, do yourself a favor and bring along your fly rod. Fish this spot from July through October. This is when you’ll find the most access to these fish.

Bring along your 8 through 10-weight rods to the Campbell. Also, Coho Poppers as well as any sort of baitfish pattern is going to be successful for you!

The Kenai River is by far the most famous salmon river in the United States. The world record was pulled out of here and massive King Salmon still return every single year. The Kenai actually holds 8 out of the top 10 King salmon records. These fish enter the river from May through June and July through August.

Bring along your 8 to 10-weight rod to fight these fish. You’re going to need every ounce of strength to land them! Many anglers use two-handed rods or switch rods when targeting salmon. It’s not a bad idea to book a guide when trying to fish the Kenai. It can feel overwhelming, but with some advice you’ll be more prepared for your next visit.

Great Lakes salmon fishing is highly underrated. Most anglers will either head to the west or east coast in pursuit of these fish. You can land Coho as well as Chinook throughout the Manistee. Most of these fish are running from labor throughout October.

This is a true salmon river. It’s wide and powerful giving anglers a glimpse into what they might find on the west coast! Again, a guide is never a bad idea when you’re targeting salmon. They’re temperamental fish and act differently in each river.

Take along egg flies, woolly buggers as well as your fair share of stonefly nymphs. Dead drifting or swinging for salmon is a productive way to target these fish.

The Skeena River is another classic salmon fishery. Located in northern British Columbia, you’re going to have to travel quite a way to access it, but the productive fish always makes it worth it. Access is easy on the Skeena and you can either float or wade this water. It can feel extremely overwhelming due to the size and speed, but there are loads of fish throughout it.

Most anglers use spey or switch rods when fishing the Skeena. Fish here from August to mid-September if you want access to the majority of the salmon. You can catch Coho, Sockeye as well as Pink. The precipitation levels are lower, and you can find “fishier” looking water as a result.

Columbia River, WA and OR

Many anglers are frustrated at the state of salmon fishing on the west coast. However, the Columbia River that runs through Washington and Oregon is so tightly managed that the population is returning with solid numbers. The river is beautiful, and fishing happens to be amazing.

Visit the Columbia somewhere between March and December. These are filled with King Salmon! You may not find the size that you would in Alaska, but a 3o to 50-pound fish isn’t overly uncommon. Those egg patterns are going to help you land the most fish.

If you’re looking to catch some salmon near your home, it’s best to visit your states’ Department of Natural Resources website. If you’re not located near the Great Lakes or along one of the coasts, you’re likely going to have to rely on targeting landlocked salmon that were stocked in local ponds or lakes.

However, if you know they exist in your waters, do some research and reach out to local fly shops to find out when they run and where they spend their time! Timing is key when you’re targeting salmon.

Tips for Catching Big Salmon on a Fly Rod

When looking to land salmon on a fly rod, make sure you’re using the proper weight. A 7 to 10-weight rod is going to be able to handle the weight and power of these fish. Also, your line choice is quite important! Make sure you know where the fish are feeding before you make your choice.

Floating line or sink tip line are the most common types of line that you will use when targeting salmon. It’s not a bad idea to carry two reels with different lines.

My favorite salmon fishing technique is dead drifting. I’ve landed the majority of my salmon with this technique. Finding a fishable seam and letting it float through the deeper portions of the water is often successful. The fish will strike your fly with aggression!

Some of my favorite patterns to use when targeting salmon are Eggs, Spey Flies, Egg Sucking Leeches, Ally’s Shrimp, Glo Bugs as well as Hex Nymphs.

These patterns have landed salmon for years. However, make sure you talk to local anglers before you make your pattern decisions! Each region of the world has some patterns the seem to work better than others.

Where to Find Big Salmon in a Lake or River

When you’re staring at the water, it likely won’t be difficult to pick out where the salmon are occupying. You’ll see dorsal fins shooting through the water as the fish strike food. However, the edges of pools as well as along laydowns are great areas to target salmon.

Since salmon work so hard to get upstream to their spawning grounds, they don’t want to be in the current more than necessary. Slack water is a dead giveaway of where salmon will be hiding.

Get Out & Cast a Fly to Some Salmon

Salmon fishing isn’t easy. Broken equipment, poor weather and fishless days are common. However, the few opportunities of hooking into one of these fish keep anglers coming back in search of these beautiful fish. Do yourself a favor and give it a try. You’ll find that it won’t take long to get addicted.