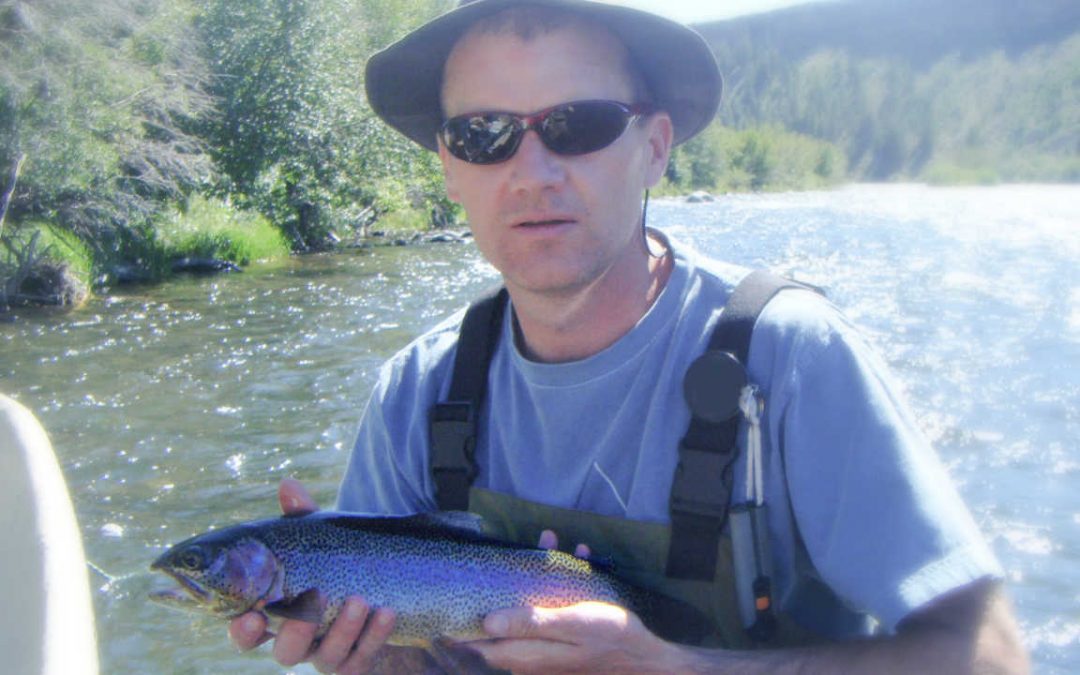 What makes the muddler so affective is it can be fished in so many ways.

Fished high or low, wet or dry, there are few conditions under which the Muddler fails to take trout. Developed in the mid-1930’s by Don Gapen, the muddler imitates the sculpin, a bottom-dwelling baitfish common in many lakes and streams.  Muddlers represents several forms of aquatic and terrestrial life and so can be used to catch for trout, bass along with panfish.  When as a streamer deep, it’s often a mystery what’s on the end of your tippet until you see it.

Traditionally the muddler is fly fished as a streamer deep in the water column. Sculpin hug the bottom and dart around cobble bottoms searching for food.

For a deep presentation, tie the Muddler weighted or add a few split-shot pinched onto the leader. Weighted flies exhibit far less action in the water than their unweighted counterparts.  My selection of which method of weighting often depends on the current strength.

If I’m targeting trout deep in a moderate current, I’ll often use a section of sinking tip like RIO T14 attached to the fly line with a straight 4 to 5-foot section of 8lbs fluorocarbon tippet terminating with an unweighted muddler.   I’ve sketched this up below.

The deer hair head on muddlers gives it a unique option of fishing it as a dry fly.  The buoyancy of the deer hair combined with a liberal application of floatant makes a convincing top water fly.

In larger hook sizes (4 and 6), Bass strike muddlers just like other popular poppers.

One of my favorite ways to use a “dry” muddler for trout is to use it as a grasshopper imitation.  The wings on a muddler tend to cause it to lay on its side and I believe the wings appear to be the legs of a hopper.

I’ve bounced the Muddler off grassy banks into likely lies with impressive results. If you tie your own flies try the standard tie or substitute bodies of wool or synthetic dubbing (colored to match the underside of the naturals in the area) for the standard gold-tinsel body.

The niche best filled by the Muddler Minnow, however, is as a streamer. The most popular technique for fishing it wet is the standard down-and-across approach. Using this method, you cast the fly across and slightly downstream, then allow it to drift freely, making no effort to avoid drag.

It’s this drag, imparted to the line by the faster, midstream currents, that puts action into the fly.

The strike often comes as the fly completes its drift and begins to swing around and rise to the surface. When fishing faster, deeper water, cast the fly upstream and across-giving it time to sink to the desired depth.  A good mend adding slack moments after casting will also help this fly sink.

When streamer fishing, you won’t have to worry about detecting tentative takes.  Usually muddler strikes are a bone-jarring jolt, and all you need is a firm grip on the rod to set the hook.

A Cast of Muddlers

Muddlers tied in multi-fly setups were once really popular.  Some old timers have described stringing up to 3 muddlers together.  These rigs often result in more time untangling birds’ nests for the beginning fly fisher.   Once unless you’ve developed casting ability that yield big open loops above 3 streamers rigged together.

I will often tie an egg dropper off a heavily weighted muddler during salmon season.  Those deep pockets behind a red often hold some nice brown trout and this combination often encourages a selective trout to bite.

I’ve always carried some type of muddler in my fly box as one of those foundational flies.  I’d even suggest that muddlers are having a resurgence. I’m seeing younger fly fishermen adopt some “back to basics” traditions minimizing gear and concentrating on essentials and Muddler Minnows are essential.

Dry, Wet or as a Streamer, the versatility is what makes the Muddler one of my first choices when there isn’t a hatch.  Whether fishing a stream for the first time or wading familiar waters, if I see no hatching activity when I first enter the water, I tie on a Muddler or a Muddler variation and begin searching the water. Using this approach, I can land the first trout of the day as quickly as possible

I cast the fly as close to the far bank as possible, and as soon as the fly settles, I make an upstream line mend, allowing the fly to sink a bit until the current does its job. This presentation allows the fly to make a slow, lazy drift after I mend the line, and the fly sinks five or six inches before it is jerked into action by the current.

As the line straightens and is pulled downstream by the current, the sculpin imitation suddenly rips across the shallows like a frightened baitfish. Trout often stack up on the edge of such transition zones and watch for just such baitfish behavior. Their reaction is instinctive and the strikes are both sudden violent.

Fishing the Muddler with a standard down-and-across presentation in a swiftly flowing riffle is another productive technique. Most anglers pass by these areas on their way to what they believe to be more promising pools and runs- assuming perhaps that the riffles are too fast and too shallow to harbor mature fish. Not so.

In fact, just the opposite is true. While the deeper, quieter portions of a trout stream do hold more fish, most of them do not feed readily, while trout in the riffles are there for one reason: to eat. The riffle is the most fertile area of any freestone trout stream, and it supports a vast array of aquatic lifeforms.

Guide Tip: Don’t forget weighted cone and bead heads.  These heavy weights are a favorite for counting down a fly to some significant depths.   Vary you’re the retrieve speeds and actions until you discover what “triggers” those deep trout and bass.

Trout found in riffles are usually more than willing to take a well-presented fly. The higher oxygen content, caused by the riffle’s constant mixing of air and water steps up the fish’s metabolism and feeding activity.

In the low, warming waters of late July and August, oxygen content is a determining factor in holding active trout. Regardless of season, all trout are more active in water with a high oxygen content.

The brown trout is most susceptible to the Muddler’s charms. Primarily nocturnal by nature, browns are most active during the same low-light periods as the sculpin, which spends much of its daylight hours skulking in the bottom shadows. This predator-baitfish behavior creates an early-morning/late-evening activity nexus, and only the most ardent of fly fishers take advantage of it.

Guide Tip: I’ve actually documented when I’ve caught the most trout. Read – The Best Time of Day to Catch Trout

I’ve often said that mornings are my favorite time to cast a fly.  Most fly fishermen seem a bit too lazy to be on their favorite trout streams at first light. It’s unfortunate for them, but a blessing for me.

Because the best (and sometimes the only) way to entice trophy browns is to be on the water at either the first hint of dawn, or as the sun’s final rays dissipate into darkness. In fact, the usually cautions large brown often abandons all wariness and becomes almost easy to catch under cover of darkness.

Probably 25 years ago, I received advice from personal acquaintances preaching the virtues of the Muddler Minnow. Back then I gave the Muddler couple tries, but favored dries and drifting nymphs under indicators.  I wrote off the muddler as another “miracle fly” and stuck to a couple proven flies and techniques.

In retrospect, if I was to learn the techniques for fishing streamers and along with those dries and nymphs, I’m sure my skills and catch rates would have increased quicker.

Last Cast with a Muddler

Learn the techniques to fish streamers affectively. The Muddler and the variants that spawned from it like the Humpy and Bunny Muddler.    If you aren’t satisfied with your fishing success, tie on a Muddler Minnow and fish it. Fish it dry or deep, but get out there and fish it.