What Is a Large Arbor Fly Reel? Let’s Find Out! 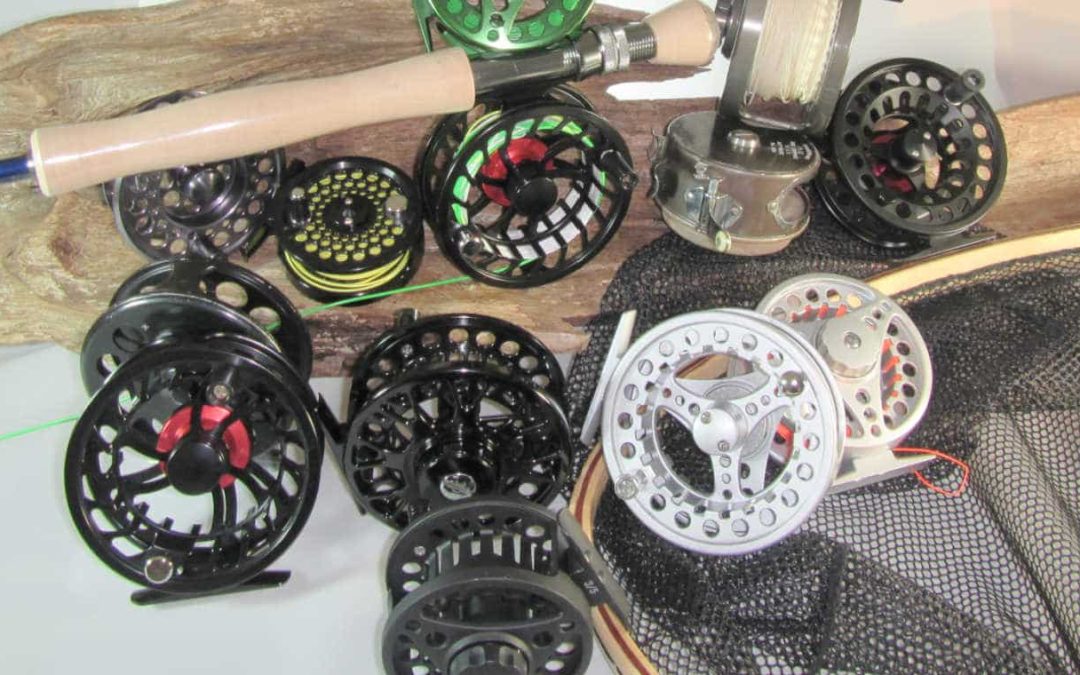 How fast can you crank a reel handle?  That hot steelhead has decided to play a trick on you and run toward you at a speed that defines a silver bullet.

Slack line and a jump usually results in disappointment, but if you could gather line faster, have a reel with a larger drag disc and reduce those nasty fly line curls – what would you have?  A larger arbor fly reel.

The idea of a large arbor reel has been around for a long time.  In the past what made the arbor larger was 100’s of yards of backing, which created a bigger arbor for the fly line.

The benefits of a larger arbor are apparent, but what actually defines a reel as being “large arbor” is a bit confusing.  If you look up the Orvis patent for large arbor fly fishing reels you get:

If you want a layman’s definition Large Arbor Fly Reels are:

The bigger the diameter of the inner spool of a reel, the easier it will be for you to fish. So, in this article, we’ll show you what a large arbor fly reel is. We’ll also show you the main benefits of the large-arbor fly reels over the traditional ones.

What Is a Large Arbor Fly Reel?

Fishing reels are fly cranking reels usually attached to the fishing rod and used for stowing and winding the fishing line. (source) In fact, the first narrow-spool ventilated arbor reel was patented by Orvis Charles in 1874. But since then, the design has remained unchanged, with most modern fly reels still using the same design to date, including a narrow, deep spool rotating on its spindle. (source)

Sure, manufacturers have made many advances on their products, including better metals, palming rims, and sophisticated drags. But this changed with the introduction of the large-arbor reels, which demands less reeling. (source) The large arbor fly reels have been the most popular gear in the fly fishing industry ever since the 1970s when the industry introduced graphite rods. These reels won’t give you the ability to cast further, but they will help you fly fish with ease, which begs the question, “what is a large arbor fly reel?”

Well, larger arbor reels have wider inner spools than the standard reels. The whole idea behind these reels is to increase your line retrieval rate. It means that you can easily retrieve more lines within the shortest time possible. After all, the center spool’s diameter is more than five times bigger than that of the traditional spools. (source)

It is the main reason why they are pretty popular among anglers.

Looking for how to select a fly reel? – I’ve got a complete guide detailing. What size fly rod matches up, line capacity and disc drag systems. Read it here – How to Select a Fly Fishing Reel

Why Is a Large Arbor Fly Reel Better Than the Traditional Fly Fishing Reel?

The considerable difference can come in handy when fly fishing, as you will have to strip off a long slackline when casting. You will also have to reel the line in quickly when playing with your trophy catch or when casting the second time. The large arbor fly reel has made the frustrating job of casting and retrieving lines easier. (source)

Large arbor reels can come in handy when fishing for fast-running species like bonefish and pikes. These fish can turn and swim towards your vessel after reeling out over 100 yards of line. So, if you don’t reel in your line quickly, you stand a chance of losing your trophy catch. But with a large arbor reel, you don’t have to worry about these fish running away from you or wrapping the line around the propeller blade. (source)

With a standard reel carrying 50ft of line, you will have to do about 100 cranks to reel the fish in, which can be pretty tedious. But with a large arbor reel with a considerable surface area, you will be able to reel in 5 times more line and reduce the likelihood of losing your catch. (source)

There is nothing more discouraging than your line getting tangled whenever casting when it comes to fly fishing. If this is a problem, you must replace your current standard arbor reel with a large arbor reel. After all, large arbor reels have more surface area; therefore, they can release an extensive line coil when cast.

It makes it easier for you to cast your lines with little to no tangles. The large arbor reels may make casting more straightforward, but they won’t give you more casting distance than the other types of fly reels. (source)

Even though the fight with a struggling fish can be entertaining, at the time, you may end up tiring the fish beyond its ability to recover. But with a large arbor reel, you have a low likelihood of losing your catch or fighting with it for a very long time since you will be reeling in the line 5 times faster than with a standard arbor reel. (source)

Naturally, the increase in the size of the arbor reel comes with a few drawbacks that can make you think twice about getting this reel. One of its main drawbacks includes:

Increasing the diameter of their core leaves less room for the line; therefore, the manufacturers had to make allowance for the line capacity somewhere else. They had to increase the width of the reels or the size of the entire reel, which left them with a bulky reel. (source)

Despite having many advantages over the other types of reels, the large arbor fly reel tends to be quite heavy and massive, primarily when used with a light rod. A large arbor may seem overpowering when paired with a lighter fly fishing rod. Therefore, when small-stream fly angling, you won’t have to cast more than 20ft. A large arbor can become a burden instead of helping you catch fish. (source)

Initially, these fly reels were quite costly, but manufacturers have reduced the cost with new technology and cheaper materials over the last few years. (source) But they are still more expensive than the other types of fly reels

Wondering what’s inside a fly reel? Read about it here: How Fly Fishing Reels Work

What Is the Difference Between the Mid and Large Arbor Reels?

What Is an Arbor on Fly Reels?

Arbors on fly reels refer to the size of the spool when your line is attached. The size of the arbor of the fly reels ranges between standard, mid and large arbors. Therefore, you have to pick the right option for your experience level. It means that new fishers need a reel that can help enhance their casting skills, like the large arbor fly reels.

Can the Large Arbor Fly Reel Improve Your Casting Skills?

Well, as aforementioned, this reel won’t improve your casting distance, but it will lower your likelihood of getting tangles when casting. The high retrieval rate will also allow you to fight vivacious fish before they snap your line.

Why a large arbor fly reel? Easily the most popular reel in the fly fishing industry. Way more advantages than disadvantages. The large spool core diameter increases retrieval speeds up to three times faster than small arbor reels. This is particularly beneficial in the higher weight fly rod setups +7 weight and higher. more line than the standard option in the market. Plus, it can help you perfect your casting skills, especially when fishing on a lake.