A Review of Streamer Fly Boxes for Big Flies 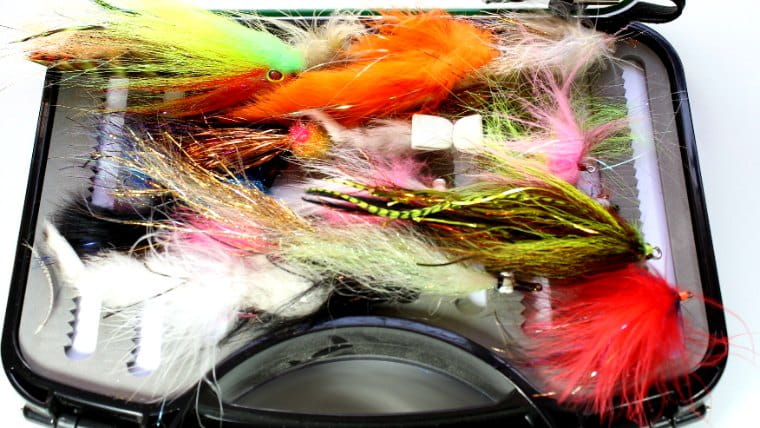 Just because you’re fly fishing doesn’t mean every presentation you make needs to be delicate or subtle. Sometimes you have to chuck big, nasty streamers to target and catch the largest fish in the river.

The problem is, toting heavy-duty streamers can be a bit cumbersome. Luckily, there are fly boxes made specifically for the task. And in this article, we provide a quick review of some of the best fly boxes for streamers and other big flies currently available.

Below I’m going to talk about the streamer fly box system I use. It boils down to a couple fly Boxes. One is a WAREHOUSE to store all your streamers for this I RECOMMEND the CLIFF BUGGER BEAST (Amazon link to check the current price) The second box in the system is the one you’ll be carrying with you wading. For this streamer box I RECOMMEND the value packed SALMON FLY BOX (link to Amazon- I haven’t found this one in shops)

The Two Box System for Streamers

Because streamers are so big you usually have to resort to a two box system. One boxes becomes your warehouse, it stores your full inventory of flies. This is where the Cliff Beast fly box really shines. It’s huge measuring 13.5″ wide by 9″ tall by 3″ deep, this box has the capacity to hold over 8 dozen streamers. The picture below shows the size difference between the “Beast” and the “Beast Jr” Both of these streamer boxes are what is considered a Boat Fly Box. Meaning the intent isn’t to carry while wading, but If you’ve got three dozen flies (which isn’t many) You’ll need some place to store them. So if your in the market to get a bigger box to store a bunch of flies you can go wrong with the Cliff Bugger Beast.

The next box in the system is your “wading box”, this is the fly box that you’ll transfer flies from the warehouse box into. I’ve found that the key is to get a box that has enough height not to smush your streamers. The Salmon Fly Box <- Amazon link (last time I checked around $10) Works perfect for this measuring 4.75″ wide by 7.5″ long and just under 2″ deep. It does not have a swing leaf in the middle which further increases the height inside the box.

When Tacky launched their Original fly box, many anglers quickly adopted the new slit-silicone technology due to its extreme durability, strong hook grip, and overall ease of use. Eventually, Tacky expanded their product line to include a big-fly-friendly fly box the Big Bug Box.

While it doesn’t have as large of a capacity as some of the other streamer boxes on the market, if you frequently fish flies bigger than size 2, this box is a must-have.

If you’d like to check out the prices here’s an AMAZON link to TACKY BIG BUG BOX.The cool thing I like about this fly box is magnetic closure in the corners.

Using a more traditional slit-foam fly anchor system, the Umpqua Streamer Box is a flip-panel box designed specifically for large flies. Made of extremely durable plastic, it’ll take drops, crashes into rocks, and any other abuse you might subject it to. Plus, the clear plastic allows you to see your flies inside so you can keep the box closed when deciding what to tie on next.

The Umpqua Streamer Box is another boat box that has a handle. Smaller capacity when compared to the Cliff Beast though. It ?has two different height lids to save space and help organize those big bugs.

As one of the most iconic big fly boxes around, the bright yellow Cliff Beast is the preferred fly box of hardcore anglers dedicated to all things meaty. Other than having a huge capacity for large fly storage, the highlight of the Beast is definitely its high-density closed-cell foam that’s significantly more durable than the foam used in most fly boxes.

The Bugger Barn is the scaled-down version of the Cliff Beast and can easily be tucked into a pack or vest. It has the same extra-durable blue foam and has a casing made of tough plastic. With plenty of headroom and long slits in the foam, this box is ideal for storing long streamers and accommodates articulated flies with multiple hooks no sweat. This is another great alternative for a carrying while wading.? The Cliff brand has been around a long time and it’s even made in Casper Wyoming.

The CLIFF BUGGER BARN – Link to AMAZON is a great value, it does have a little less capacity, but will still hold flies for most outings.

Another great option for hauling big flies to and from the river is the River Traditions Streamer Fly Box. As a double-sided box, this thing holds a ton of big flies and with clear plastic lids, you can see everything inside without opening.

Adding an extra degree of security, the Streamer Box has a full perimeter gasket creating a watertight seal to keep your flies nice and dry before you send them swimming. Like the Cliff Beast, the River Traditions Streamer Box is quite large and better suited for drift boat trips.