How to Fly Fish with a Woolly Bugger 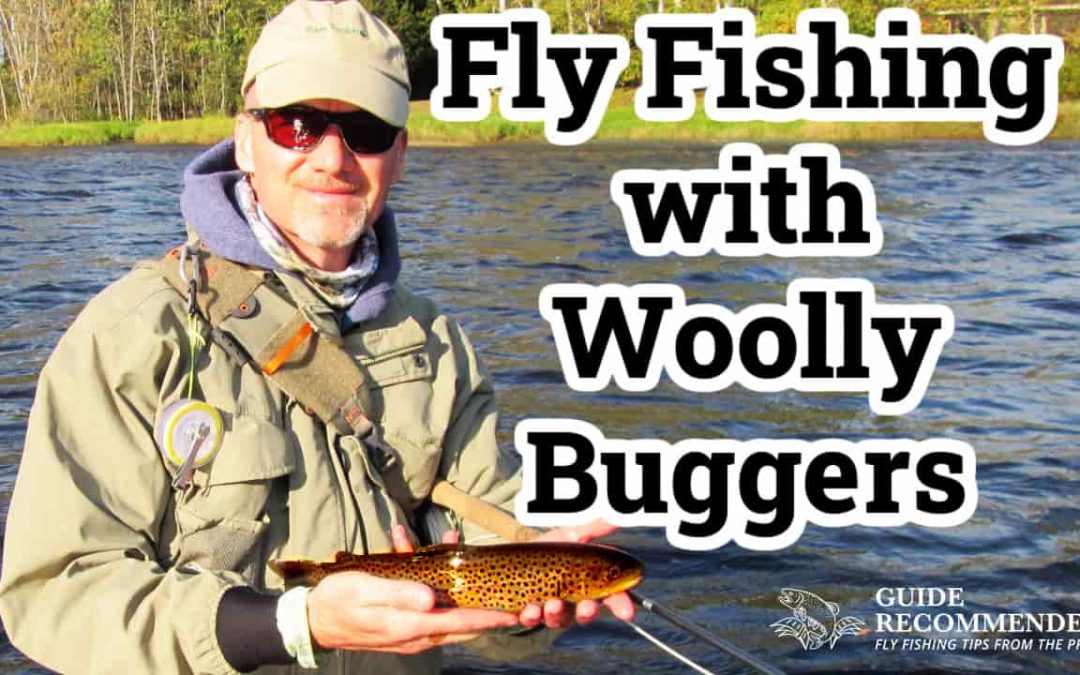 Woolly Buggers are a prized possession for many fly anglers. These flies have been in existence for decades and continue to be as productive as they were when they were first introduced. My largest trout ever was caught on a Woolly Bugger and I always throw these when I see some deeper runs, seams and pools. The versatility of this fly is beyond impressive!

Versatility doesn’t always mean easy to use. Woolly Buggers can be productive for numerous species of fish and productive in a variety of water conditions. There are a few ways to fish this fly that every angler needs to understand!

Swinging Woolly Buggers is one of the better ways to fish this pattern. In order to properly swing them, it’s best if there is a bit of weight on these flies so they can fall in the water column.

As it swings, strip in a bit of the slack and raise your rod tip. This will keep the fly lower in the water column. The fly will eventually start to make its move across the river and that is when you need to be prepared for a hit! Fish will dart out from structure or the bank to smack the fly on the swing! Be prepared for that strip set.

How to Fish a Woolly Bugger Like a Nymph

To fish a bugger like a nymph, cast across and up stream. Once it hits the water, make sure the fly is “leading the charge.” You may have to mend upstream to give the fly a chance to get past the line. Once it’s past the line, you can raise your rod tip and retrieve the slack.

There’s a fairly small strike zone when you fish this fly like a nymph. The 5 or 10 feet in front of you through the 5 feet below you are going to be where the first are most likely going to bite. You can go ahead and use this method if the fish are a bit skeptical and don’t need much action.

Look for the riffles and front sides of pools. You can fish these with upstream nymphing techniques as well. Slowly twitch the fly upstream through a riffle and fish are going to strike. Anglers often forget to fish their nymphs upstream!

GUIDE TIP: Use the Woolly Bugger if you know larger fish are in the water. They can imitate a variety of prey so don’t be afraid to use them. You’ll get hits!

Fishing a Woolly Bugger Under a Strike Indicator

You may want to put an indicator above the Woolly Bugger so you can detect any strikes that may occur. This will be especially helpful if you’re using this fly in the winter. Fish are going to be slower to strike in the colder months so you need that indicator to see when they do hit.

If you’re fishing cut banks or deeper seams, the strike indicator is going to be a great asset. The water generally moves fairly fast through these portions of the water and you’re going to be able to see if your fly is taken! You can use a small piece of cloth or a tiny bead as an indicator.

One of the most productive fishing methods with the Woolly Bugger is to dead drift it. Properly dead drifting a bugger takes more effort than you think!. You can tie on an indicator as you dead drift. Cast up and across stream, let the fly sink and start your mending.

It’s imperative that you mend when you’re dead drifting your flies! You don’t want your line to slow down or speed up the rate of your drift. A dead drifted fly is meant to imitate a dead bait fish that is floating through the lower portions of the water column.

If you are dead drifting, it’s not wrong to apply a bit of movement. A few strips here and there as well as movement with your rod tip is going to do the trick. You’ll often see your line go slack when a fish hits your fly on the dead drift. Once you see this, set the hook! You’re going to be in for a great fight.

If you’re fishing a bit slower water that is fairly deep, quick stripping your bugger can work great. If you see structure up along the bank, cast upstream past it. Let the fly sink for a few seconds and then start stripping towards yourself at a decent speed. You want to pull the fly faster than the speed of the current.

This method has caught me some extremely large fish. It’s a fairly specific method that only works at certain times, but it’s always worth the effort. It’s one of the best ways to anger those larger fish and make them more aggressive. Again, try this method near structure. Fish won’t want to leave for long, but if they see some active prey, they’ll go and get it.

What do Woolly Buggers Imitate?

Woolly Buggers imitate baitfish, crayfish, nymphs and leeches. Since they’re so versatile, you will struggle to find a situation where they aren’t going to be productive. These are great search flies if you aren’t quite sure what’s biting and you see some baitfish swimming around.

Also, if you see any crayfish near the water, then you need to throw the Woolly Bugger. They are a great representation of a fleeing crayfish so make sure you give these quite a bit of action while you’re fishing.

GUIDE TIP: Don’t hold to only one method when fishing with a Woolly Bugger. If you aren’t landing fish after a few tries, then change the method and see if it’s more productive.

One of my favorite colors and sizes of Woolly Buggers is the size 6 Olive. The olive pattern works great in slightly stained water. This is a bigger size that looks quite buggy. It has nice action as it drifts through the water!

My other favorite is the size 8 black bugger. This fly lands fish after fish in the Black Hills of South Dakota. You’ll struggle to find a more productive fly. Dead drift these through the pools and you’ll see those fish flash from the bottom in pursuit!

Should Woolly Buggers Be Weighted?

What Fish Can You Catch with Woolly Buggers?

Again, you’ll land more fish than you can think with this pattern. The list keeps getting longer of all the fish you can catch with it.

If you’re interested in tying flies, Woolly Buggers can be a great first option. They aren’t overly complicated to tie and the more buggy they look, the better. Fish will often hit “non-traditional” looking flies.

Make sure you have Black 3/0 Monocord, lead wire, marabou, copper wire, chenille and rooster saddle when you’re tying this fly! It takes a bit of time to learn, but this should definitely be one of the first streamers you tie. Trial and error is the key to a solid looking Bugger.

Woolly Buggers are wonderful because they don’t overcomplicate fly fishing. Yes, they’re versatile, but they don’t require anglers to do anything particularly fancy or out of the box to land fish. It’s an attractive looking pattern that angers fish of all sizes. Some of my best ever days on the water were with these patterns and I will use them as long as I’m able to cast! You can never go wrong with a Woolly Bugger.