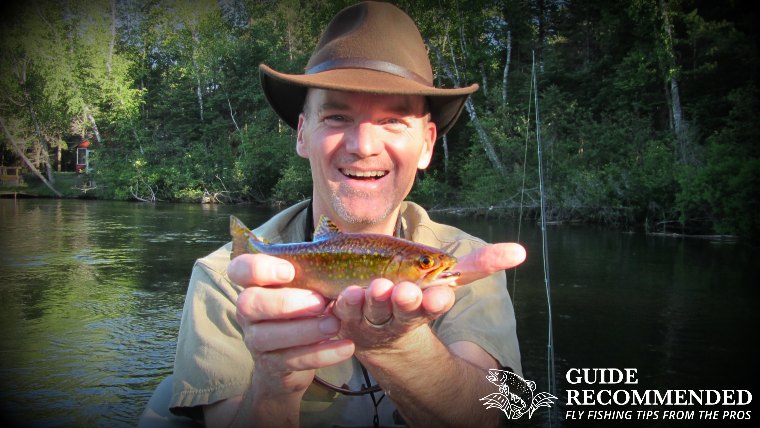 When I think of Maine in think of Brook Trout. Deep dark forests with bubbling creeks occasionally blocked up by beaver. Brook Trout and the beauty of a forest go hand in hand.

1. The Kennebec River for Fly Fishing

The Kennebec River is a 170-mile long river entirely within the state of Maine. Two tributaries, the East and West Branches of the Kennebec, form the main river, both of which flow into Indian Pond. Below Indian Pond, the Kennebec flows into the Forks Township, where the Dead River flows in. From there, it grows wider and joins Wyman Lake in Moscow, until eventually emptying into the Atlantic Ocean.

The Kennebec is a highly reliable tailwater fishery due to the several dams that interrupt its flows. Also, the Upper Kennebec is widely regarded as one of the best places in the country to fish for wild, native brook trout. In this area, the brook trout are known to grow to over 20 inches and weighing up to 5 pounds. All fish above Salon on the Kennebec are wild or native fish, as the fishery is not stocked. Below Wyman Damn, the tailwaters allow for cold-water trout fishing even during the heat of summer.

Want to learn how to setup a fly rod for dry fly fishing? Get a FREE 20 minute video describing everything. Rods, leaders, tippet, knots and more! Enter email below.

Along with its wild and native brook trout, the Kennebec holds landlocked salmon, brown trout, and rainbow trout. The rainbows and brown trout average about 14 inches, but 20 inch+ fish are regularly caught and a 31” rainbow was harvested here.

Where to Fly Fish on the Kennebec

Since the Kennebec is so large, different areas of the river will fish drastically different from others, and fishing is largely dependent on the releases of the dams. Fishing on the Kennebec is also interrupted by snowmelt, as this area receives a significant amount of annual accumulation. It’s usually around the middle of May before the water loses its springtime murkiness.

The Kennebec’s East Branch starts in Moosehead Lake near Rockwood. From there, it flows 3 miles to Indian Pond. This stretch of the river is full of pocket water, shallow riffles, long runs, and deep pools. Maine trout fishing is characterized by pool fishing, so its these deep pools you should focus on.

Access to the river at this point can be found right below the dam. There are trails by the river, and parking is available. If you walk up river form this point, you’ll come to the “Dam Pool” which holds a good population of fish. Usually this area is easily wadable, but be sure to check the flows before you go out. Down river from the Dam Pool, you will find the Gage Pool, then the Bridge Pool. From there, you have about a half-mile of trails and public access along the river.

Another hotspot is referred to as the “Forks” where the Dead River tributary joins the Kennebec here.

Highway 201 follows the Kennebec here and there are several public access points along the road. This section fishes especially well during the Fall for brookies and landlocked salmon, but you can also find some brown and rainbow trout as well. The further downriver you go, the more remote your fishing will be. You can wade or fish from a drift boat if you prefer.

Continuing downriver to Moscow, Maine, the Kennebec forms Wyman Lake. Below this lake is another awesome tailwater fishery that can be easily accessed by highway 16. This area holds brookies, landlocked salmon, and one of the only wild populations of rainbow trout in Maine. These fish are, for whatever reason, more powerful than fish in other areas of the river and are known to be more particular than other populations. So be sure to visit local fly shops to match the hatch.

Recommended Flies for The Kennebec River

The Kennebec has strong seasonal hatches of flies and aquatic insects. So picking the right fly can be hugely advantageous on this river.

2. The Rapid River for Casting a Fly

The Rapid River flows out from Umbagog Lake only about 3.5 miles until it empties into Lower Richardson Lake. In that short distance, the river drops over a hundred feet, creating a brisk flow, hence the name. But you aren’t here for the rapids, you fish Rapid River because it’s one of the best places in the country to catch a monster brook trout. In this river, the brookies average four pounds.

The Rapid River also holds a stellar population of landlocked Salmon that weight up to five pounds and hover around 18 inches. Fishing on the Rapid River is best in September, and continues to be good throughout the fall. Summer is decent, and Spring can be great depending on the snowmelt.

Where to Fish on the Rapid River

Fishing the Rapid River is a challenge, as getting there is quite difficult. It requires a significant hike or a boat. The closest the roads will get you is about here.

From there, you’ll have to access the river by foot. There is a pool between Lake Mooselookmegntic and Upper Richardson that’s just a half-mile hike away. It holds fat brookies and landlocked salmon. This is deep water, so focus on nymphing and streamers.

But the real hot spot is between the lower dam and Lake Umbagog. This section has over 2 miles of pocket water and deep pools. It takes a serious hike to get there, so the fish get much less pressure than other areas. This water is full of the fat brookies you come here for and holds plenty of landlocked salmon. Fish it slowly and stealthily, being careful to not kick up too much sediment as you walk.

Recommended Flies for the Rapid River

The river itself is limited to fly fishing only, which lowers the pressure on the fish and allows the brook trout to grow to considerable size. You’ll also find landlocked salmon in this water and a few brown trout.

Another awesome, secluded fishery is the Kennebago River. Near the border of Vermont, and towards the city of Quebec, the Kennebago starts at Big Island Pond in the Seven Ponds township and flows through two lakes, Kennebago Lake and Little Kennebago Lake, until it reaches its end at Cupsuptic Lake. The entire river is remote, difficult to get to, and rewarding to those who make the effort.

Do you want to find more spots to Fly Fishing in Maine? I highly recommend the book Flyfisher’s Guide to New England (Amazon link). A great book to planning your next fly fishing trip or looking to exploring some new water.

Because some of the salmon and even the brook trout can reach nearly 5 pounds, you’ll want to pack your 5 weight to fish here. Heck, a 6 weight would even be warranted. You don’t want to bring a knife to a gun fight and lose a trophy fish because you were too lazy to bring the right gear.
Where To Fish on the Kennebago River

The upper areas of the river are wadable and fishable, albeit it is small pocket water. So if you decide to make the trek to this area, bring your 3 or 4 weight and practice your bow and arrow casts. It’s also incredibly beautiful here, so pack your camera too. To get to this water, you’ll want to go here:

As you move downstream, you’ll start to encounter bigger fish in bigger water. Access is difficult, again, as you must either hike or take the unpaved roads. There are campsites near the river that you can utilize for longer trips.

Recommended Flies for the Kennebago River

Most fishing for the Brook trout on the Kennebago will be done with nymphs and streamers. The salmon, in particular, mostly forage on the smelt population.

If you need help selecting flies for The Kennebago River or anywhere else, checkout this FREE Downloadable Hatch Chart.

The Roach River flows into Moosehead Lake in North Central Maine. It’s a catch and release, fly fishing only river that is beautiful and full of good sized brookies and landlocked salmon. Brook trout in the Roach average about 10 inches, but some of the bigger fish will get nearly 3 pounds. The salmon are usually about 15 inches.

It’s a small stream with surprisingly large fish, and doesn’t get too much fishing pressure, making it a perfect place to get some solitude while you try to put a bend in your rod.

The Department of Inland Fisheries and Wildlife owns the land surrounding the river providing ample access to the water. Popular entry points are below the dam or from the logging road on the north side of the river. Salmon fishing is best in the spring and fall, but the brookies bite year round. Spring runoff can create difficult fishing conditions, so check with local fly shops to learn about the flows.

Libby Camp is a Northern Maine fly-in lodge that has the Motto: “Catch and Relax” Specializing in Trout, Salmon and Smallmouth Bass. Check them out here – https://www.libbycamps.com/index.php

Maine Wilderness Lodges has MEDAWISLA LODGE AND CABINS set in northern Maine in the 100-Mile Wilderness. Check them out – https://www.outdoors.org/lodging-camping/lodges/medawisla/

The Presumspcot River is an appropriately named small to medium sized river that flows out of Sebago Lake. “Presumpscot” literally translates to “many falls and many rough places” and that name fits it perfectly. There are a dozen significant waterfalls on its 25-mile flow into Casco Bay.

In the summer, the Presumscot is too warm to sustain trout populations. But it is stocked full of brookies, brown trout, and land-locked salmon every spring. Starting at Route 35 near Windham is the fly fishing only section of the river, and it’s the most commonly fished.

Some parts of the river are wadable, but be careful as there are deep pools that are too dangerous to fish. This makes it a perfect place to fish from an inflatable raft. You can find all different types of water on the Penobscot, so do your scouting beforehand so you’ll be prepared for the day. Check the flows and make sure it’s safe before you go out.

The Dead River is another fishery with a wide variety of fishing situations. The water on one part of the river will be completely different from others, ranging from swift rapids and steep drop-offs to long slow riffles and Stillwater.

One of the most popular sections for fly fishing is the South Branch of the Dead River that’s near Rangeley Maine. There’s good access to this area by way of State Route 27.

On the Dead, you’ll encounter wild brook trout and landlocked salmon, stocked brown trout, and even some wild rainbow trout- a rarity in the state.

8. The Allagash River to Fling a Fly

If you’re looking to fish for native brook trout in total seclusion, fish the Allagash River in northern Maine. You’ll be fishing wild, natural brook trout far from any significant populations. I won’t talk too much about this one, because it’s a local secret.

Another off-the-beaten-path fishery in Maine is the St. Johns River. While it’s 140 mile length make it the longest free flowing river in the Eastern half of the country, it rarely gets fished. But it holds wild brook trout and landlocked salmon in its various waters ranging from pocket water to 170-foot wide river flows.

There are various fishing situations on the rivers of Maine. To cover everything, I’d recommend a 3 or 4 weight rod for the pocket water, and a 6 weight rod for the larger streams. You never know when you’ll hook into a 5 pound landlocked salmon in some of these rivers, so don’t be shy with your heavier tackle.

Want to find out where the State of Maine is Stocking fish? Click Here -> https://www.maine.gov/ifw/fishing-boating/fishing/fishing-resources/fish-stocking-report.html