Do trout have teeth? 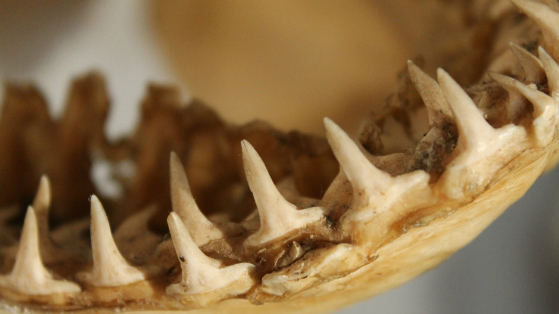 Yes, Trout have teeth. Large trout have strong jaws and can easily bite aggressively and draw blood. Smaller trout have teeth but usually small enough not to worry about. So don’t haphazardly stick your fingers into a trouts mouth. If you trout is over 16 inches you should think about using hemostats to remove a fly.

Unlike many species of fish, trout have vomerine teeth which grow on the roof of the upper jaw. These teeth are used to hold and move food down the throat of a trout. A quick way to identify a Salmon from a Trout is the number of vomerine teeth. Salmon will have a single row versus Trout which have two rows.

One of the memories I have that demonstrates that trout have teeth was at out local Cabelas. Our Cabelas is one of those monster buildings, with displays, rivers and mountains.

The trout ponds inside have some brown tout approaching 26 inches. Perodically during the day the store folks feed the fish. The trout appeared to be so what trained, they knew that the guy in the green shirt on the opposite side was there to provide WORMS.

A small crowd gathered to watch the “worm toss”, the store worker must have thought he’d show off a little and have one of those big browns eat a worm from his fingers.

You guessed it, a larger brown decided to nose out of the water to grab onto the workers fingers holding the worms. After hearing him cuss and bandage his fingers, I definitely had my answer to the question “Do Trout Have Teeth?” ins these fish.