What’s the Difference Between Fly Fishing and Spin Fishing? 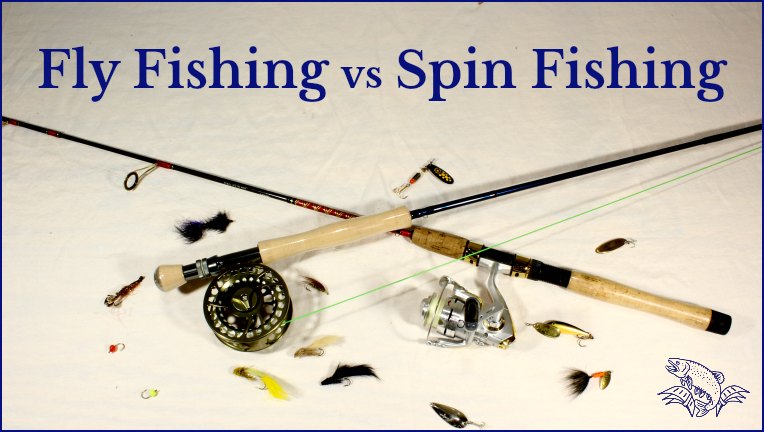 Growing up in Alabama, my early years fishing were spent with spinning rods, baitcasters, and spincasters. I didn’t know what fly fishing was and honestly I didn’t really care.

But these days, after spending my whole life fishing, I’m more of a snob. Fly fishing is my dedicated craft and in all but a few circumstances, it’s the only type of fishing I’ll do (you can’t fly fish for red snapper but boy do they taste good). I don’t necessarily look down upon other types of fishing, I just personally rather fly fish.

What’s the difference between fly fishing and spin fishing?

To the uninitiated, a fly rod looks quite similar to a spinning rod. One would even say they are indistinguishable.

However, fly rods are usually quite a bit longer than spinning rods, with fly rods tending to be around 9 feet long and spin rods closer to 7. Fly rods are also noticeably thinner and more flexible than spinning rods. All of these differences have to do with the mechanics of both the cast used with each type of rod and the methods used while fishing with them.

The kinetic energy in the line can be parallel to the motion of whipping a piece of rope back and forth. As long as you keep the rope in the air and moving back and forth at a proper rhythm, you can release more and more rope. (there are a few legendary fly fishermen who are known to be able to cast 100 feet of fly line without even using a rod).

The potential energy built up in the cast is a little more complicated. As the weight of the fly line is brought backwards, it causes the rod to bend. That bend in the rod builds up energy in the same way a bow does when it is drawn backwards. When the rod releases its tension, the potential energy is released and the fly line is propelled foreword.

Fly fishermen can also “haul” the fly line to cause the rod to bend and build more potential energy in the rod. This is a more complicated and difficult method, but it can result in faster, further casts.

The fly rod is built to maximize and optimize these two forces. The length of the rod allows for more momentum to be build by the line. And the flexibility of the rod creates more potential energy by allowing the rod to bend.

The length of the rod also allows for the fly fishing techniques to be more effectively used. While fly fishing, it is often advantageous to keep more line out of the water. By having a longer rod, you can keep more line dry and fish better.

The mechanics of casting a spin rod are much more simple. Like the kinetic energy built in a fly rod during a cast, the weight of whatever the spin fisherman is fishing with (be it bait or lure) is utilized by bringing the weight quickly backwards during the cast, causing the rod to bend, and then quickly forwards, causing the rod to return to it’s original condition and propelling the tackle forward.

The weight of the lure or bait is enough to easily bend spin rods, so they are comparatively less flexible. And because the casting is done is one short, brisk motion, the rod doesn’t have to be as long as a fly rod.

How are fly reels different from spinning reels?

Fly fishing reels look nothing like spinning reels, though they serve similar functions.

Spinning reels contain a cylinder that the fishing line is wrapped around, a handle for turning that cylinder to reel in the line, and a bail to release the line to cast. Inside the cylinder is a drag system that provides resistance to prevent the cylinder from freely releasing line when a fish is on the end.

Fly reels are sleeker and simpler (I hope my bias isn’t showing too much). They are simply a two disks with a cylinder between them that the line is wrapped around, with a small knob for a handle. Inside the cylinder, there are often times drag systems that serve similar functions to their spin fishing counterparts.

The primary function of each reel is to contain the fishing line that isn’t in the water. If you didn’t have something to do this, the line would just be a tangled mess.

Are the Lures Used in Spin Fishing Different from Flies?

The lures used while spin fishing are very different from flies used by fly fishermen. In fly fishing, the “lures” used are usually imitations of various bugs, aquatic insects, small crustaceans, or small baitfish. These are small, lightweight objects that are made by wrapping various materials around a (usually) small single hook.

Sometimes, weight is added to flies, but for the most part they are lightweight as to not cause issues with casting.

Spin fishing lures will also oftentimes have various attractor devices such as shiny, reflective pieces of metal, or small beads inside that make the lures rattle. And spin fishing lures oftentimes utilize treble hooks as opposed to the single hooks that flies use.

The flies that are the most similar to spin fishing lures are steamers- flies that are created to imitate baitfish, large insects, and crustaceans. These flies are fished similarly to how spin fishermen fish lures- by retrieving them after casting.

Why is fly line so much thicker than the fishing line used for spin fishing?

If you were to simply examine the tackle used for both fly fishing and spin fishing, you’d immediately notice that fly fishing line is much thicker than the line used for spin fishing. And that is for three reasons.

First and foremost, the fly line is thicker to make the line heavier. As mentioned earlier, it is the weight of the fly line, not the flies, that is used to build momentum during the cast. If the fly line isn’t heavy, there won’t be enough momentum to cast your flies.

Fly fishing line also needs to float. Because you’re often fishing on top of the water’s surface or with a somewhat slack line, you need the line to be floating to know when a fish has taken your fly. The thickness of the fly line adds buoyancy keeping the fly line afloat.

And lastly, the fly line needs to be thick so the fisherman can see it. Fly fishing is oftentimes done without a constant tension on your flies. So, when a fish eventually takes your fly, you don’t always feel it, but you see it. If the line wasn’t thick enough to be visible, you’d never see it.

The line also needs to be visible so that you can see it in front of you and behind you while you cast. You don’t want to be unknowingly bringing your fly line behind you into a tree or bush, so you must be able to see where it’s going when you bring it back.

Is it harder to cast a fly rod or a spinning rod?

While some may argue this is a subjective question, I’d say yes; it is harder to cast a fly rod than it is to cast a spinning rod.

Casting a fly fishing rod requires timing, feel, and an understanding of the mechanics. These things are difficult to develop and nearly impossible to perfect. It takes most people a good bit of time to learn how to cast at all, let alone cast with accuracy or distance.

On the other hand, casting a spinning rod can be nearly mastered in an afternoon. You’d be able to cast pretty far and with distance, especially if you have a bit of natural hand-eye coordination.

This is a broad question that includes significant nuances.

Fly fishing can be quite expensive, or quite cheap. You can buy top of the line fly rods and reels, spend a fortune on flies, buy the nicest waders, and a $10 thousand dollar drift boat. Or you can spend $200 on a fly fishing combo and a few flies.

And spin fishing is the same way. You can spend a hundred bucks on a rod and reel with some lures. Or you can buy 10 rods and reels, a $50 thousand dollar bass boat, fish finders, GPS systems, and trolling motors.

It all depends on how much stuff you buy.

It depends where and when you’re fishing and what you’re fishing for. Sometimes, trout will only be eating small insects and they will completely ignore anything you throw at them with a spinning rod. Others, they’ll deny every fly you own but slurp up any live bait you can find.

I will say, in calm, clear water, fly fishing will often times be your best bet, as it is more stealthy and thus less likely to scare away the fish.

Can I used my spinning rod to cast flies?

Yes! Spin fishermen will often cast flies beneath a “bubble” that both adds weight to your tackle and causes your flies to float. (This doesn’t count as fly fishing, though)

Fly fishing has many advantages over spin tackle fishing both for the fishermen and the fish.

Fly fishing is more subtle and stealthy. When you’re sight fishing a feeding trout in clear, flat water, you can’t just go up and lob a heavy lure with your spinning rod. That fish would swim away probably even before the rig hits the water. But you can sneak up and cast a lightweight dry fly to the fish, and provided that you can accurately, the fish will not be spooked.

Fly fishing also utilizes imitations of food sources that fish like trout, char, and salmon often key in on. When these fish are eating, for example sowbugs, they won’t eat anything else. You can’t cast a lure to a fish that’s only eating sowbugs and expect it to take it.

And finally, fly fishing is safer for the fish. The small flies are less likely to harm or kill the fish, and the single hooks are as well. Lures, simply put, have a higher impact on the environment. Fisheries that only allow fly fishing stay healthier and produce more and bigger fish.

In my opinion, there are no cons to fly fishing. But I will concede that it can be less effective and more difficult than spin fishing. For me, though, that’s what makes it more fun.