What is the Biggest Brown Trout Ever Caught? (with Maps and Tips) 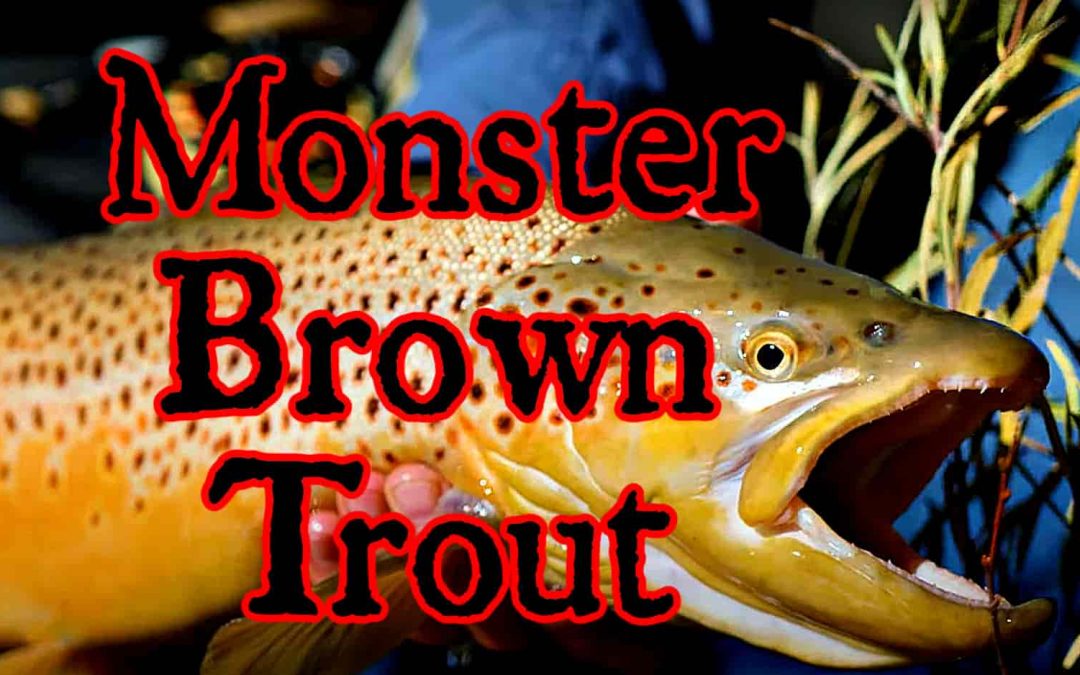 Fly fishing for brown trout is often done in beautiful locations with few expectations of catching something massive. The act of being on the water targeting some of the prettiest fish in the world is enough for many. However, there is always a desire in the back of an angler’s mind of catching one of those record-setting fish. The idea of hooking into a double-digit brown on a fly rod is almost hard to imagine, but it’s something we all dream about experiencing.

The Biggest Brown Trout in the World (According to the IGFA)

The biggest brown trout of all time was caught in New Zealand. It was a 42-pound beast caught in the Ohau Canal. The 71-year-old thought the fish was a water rat once it surfaced. It turned out to be a 20-minute fight and they eventually were able to land it despite a small fly fishing net.

To read the official stats on this go to the IGFA Website. Link – International Game Fish Association

The previous record was a 41-lb 8-oz brown trout out of Lake Michigan. Check the story behind this monster Michigan brown trout with this link. Possible World Record Brown Trout

This barely dethroned it, but New Zealand is well-known for their exceptionally large fish.

A Little Bit About Brown Trout

Brown trout primarily live in cold water filled with oxygen. Water temperatures ranging from the mid-50’s to the mid-60’s is perfect for brown trout. They’ll live in lakes, rivers as well as streams. These fish are stocked all over the United States and they’re some of the heartiest of the trout species.

They thrive in higher altitude areas due to the cooler temperatures and colder waters. Wikipedia describes the brown trout as being introduced all over the world, but originating in Europe.

Where Can I Find World Record Brown Trout?

New Zealand is one of the best places in the world to target trout. The phenomenal habitats combined with the large fish make for a fly anglers paradise. The Ohau Canal where the world record was caught is an artificial canal located right below a power station.

Many of these trout are often caught between 20 and 30 pounds so it’s not uncommon to find some massive fish in these waters. Bring along your 8 to 10-weight when targeting these fish. You’re going to need every bit of power you can muster! These fish will test you.

Bring along Clouser Minnows and other baitfish streamers. They’re going to help you land these fish! You’ll need to get deep.

The White River in Arkansas is perhaps home to some of the largest brown trout in all of the United States. This river nearly has the largest brown trout ever recorded in the United States. Calvin Johnston caught a 38-pound 7-ounce brown in these waters. It’s not uncommon to find double digit trout throughout the White River. The fishing below Bull Shoals Dam is truly something that every angler needs to experience.

Read more about this amazing fish in this article from The Kansas City Star caught on the White River near Cotter. Olathe’s Calvin Johnston Catches a Massive Brown Trout in Arkansas

Bring along your 6 to 8-weight rods when targeting brown trout. Also, any sort of shad pattern is going to help you land fish throughout the river. Scuds, Midges, Craneflies’, Stoneflies and Mini-Dungeon patterns are going to work great. Many people don’t think of Arkansas when they think fly fishing, but they should! It’s well worth your time.

Check out this article about the Best Places to Fly Fish in Arkansas – Maybe the next world record is waiting for you!

The brown trout fishing in the western United States is nothing to laugh at. The Missouri is home to numerous fish species, and they all happen to grow to be impressive sizes. The deep water filled with structure and plenty of food allow these fish to grow to record setting sizes.

Spend time fishing below the Holter Dam. This is a productive tailwater with hatches happening almost all day long. If you’re looking to fish in the midst of runoff season, this is a great spot because flow levels can be controlled.

Take along your 6-weight rod. You’re able to float as well as wade throughout the Missouri. There are few tailwaters that are more productive than the portion below Holter Dam. It’s what anglers dream of when they think fishing out west.

Recently in the news is big brown https://ftw.usatoday.com/2021/03/angler-breaks-55-year-old-brown-trout-record-calls-it-next-level-big

Fly fishing magazines are filled with pictures of brown trout from the Rio Grande River in Argentina. These types of fishing experiences seem to be impossible for many anglers. However, with a bit of planning and preparation, these trips can come to life easier than many think.

The brown trout in this river are some of the biggest sea run trout on planet earth. They’re caught upwards of 30 pounds. The fish spawn during March, April and May. They’re not unlike many other fish. They spend time in pools, near structure and hide under cut banks. It doesn’t feel like an overwhelming river and anglers need to give this place a chance. It will be a trip of a lifetime.

The Great Lakes should never be left off the list when it comes to targeting massive trout! The sea run trout that come out of Lake Michigan are beautiful and massive. They fight with all their strength and always give you a run for their money.

The Manistee seems to receive some of the largest of all of the sea run brown trout. If you spend any time near the Midwest, then do yourself a favor and target these fish. It won’t take long for you to plan your trip back.

Big Brown Trout in the News

In March of 2021, the Montana state record for brown trout was broken. The 33-pound trout was caught out of the Marias River. This fish broke a record that was set in 1966. Despite many conversations surrounding the falling fish count, record breaking fish can still be found.

If you’re looking to target brown trout near your home, your first step should be to search the state Department of Natural Resources website. This will tell you where fish are stocked, if they are stocked and where you can find the fish you want to target. This will help you determine where to target these fish!

Tips for Catching Big Brown Trout on a Fly Rod

When targeting brown trout on a fly rod, make sure you look near structure, under cut banks and throughout deep pools. They want to strike out of aggression. Also, make sure you pay close attention to how they’re feeding. If you see fish on the surface, make sure you throw those dry flies.

My favorite brown trout fishing technique is to target these fish with streamers through deep pools. I often catch my largest fish this way and the patience it takes to fully work a pool is addicting. Whether you’re stripping through the pool or letting it dead drift, targeting brown trout this way is unlike any other experience.

Learn all about fly fishing with streamers in this article How to Fly Fish with Streamers and Floating Line.

Brown trout have a fairly extensive diet so make sure you pay close attention to the hatch chart and feeding patterns of these fish before you choose.

Read even more about flies for brown trout in this article: 13 Favorite Flies for Catching Brown Trout

Where to Find Big Brown Trout in a Lake or River

When you’re looking to land big fish, make sure you’re able to identify two things. The first thing to look for is the deep water and structure. This is where big fish are going to hide. They want to ambush their prey and the more they can stay hidden, the easier chance they have at getting what they want to eat.

The second thing to look for is food. Look at flies, baitfish and anything else the fish could eat. When you can identify the food they want, you’ll have a great chance at landing fish.

Get Out and Cast a Fly to Some Brown Trout

Brown trout are beautiful, hearty and can offer anglers an extremely entertaining fight. There are few fish as amazing as brown trout. Do yourself a favor and get out to target them. You’ll be thankful for the opportunity.