What is the Biggest Brook Trout Ever Caught? (With Maps and Tips) 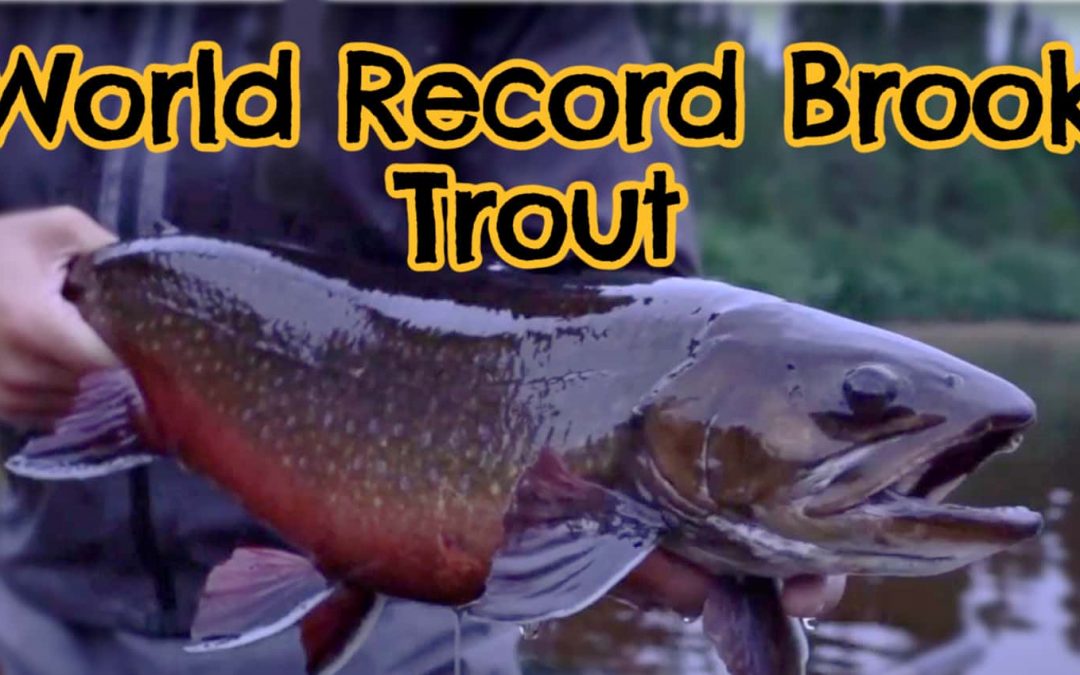 For fly anglers, brook trout are what many consider to be the creme dela creme. These are a prized possession within the world of fly fishing. Brook trout are a challenge to locate and happen to live in some of the most beautiful water in the world. Catching a brook trout with any substantial size is even less common. Most are 6 to 12 inches. A trophy brook trout is a one in a million opportunity.

The idea of even landing a multi-pound brook trout is something many anglers dream of, but can’t even imagine making realistic. The trophies are out there to be caught, but they’ll be found by the anglers willing to put in quite a bit of work.

The Biggest Brook Trout in the World (According to IGFA)

The world record brook trout record has stood for over 100 years! The current record is 14 pounds and was caught in the Nipigon River in Ontario, Canada. There are a few double digit brook trout on record, but finding a larger than 15-pound brook trout will be hard to do.

If you’re looking for the exact details about the biggest brook trout in the world, check out this link to the International Game Fish Association. What’s interesting is that many records are still open. Look specifically for “line weight records” maybe you could be a world record holder!

These fish aren’t overly popular. There are a few hot spots throughout North America, but the larger the fish you want, the harder you’ll have to work.

A Little Bit About Brook Trout

Brook trout are members of the char family. You’ll most likely find them in spring fed rivers, streams or ponds. The water needs to be extremely oxygenated and cold. They have fairly standard trout movements and spend the majority of their time hidden. They’ll move away from structure to eat and potentially sun themselves in the mornings!

Where Can I Find World Record Brook Trout?

Other areas of the United States have stocked populations, but they’re starting to be removed due to their ability to take over water. Many Western United States’ Department of Natural Resources are trying to remove them to allow for the cutthroat trout population to thrive.

The Nipigon River in Ontario has long been claimed as one of the best brook trout fisheries in the entire world. This river is located in the Thunder Bay District in Northwestern, Ontario. While it’s only 30 miles long, the cold water combined with a nice amount of food for these fish allow them to grow upwards of 20 inches. This is almost unheard of in the world of brook trout.

It’s not a bad idea to target these with some heavier streamers. You may have to use sinking line as well to ensure that you get deep enough to hit the bottom of the pools and get all the way under the cut banks. Any sort of baitfish streamer will help you land fish.

Be sure to spend some time on the gravel bars and up along the shore when hunting for these fish!

Around 100 years ago, the Au Sable and Manistee Rivers in Michigan were some of the best brook trout fishing waters in the United States. Overfishing was an issue and quite a bit of the population was wiped out. However, with recent efforts by the Department of Natural Resources, the population is growing by the year.

The extremely cold water of the Au Sable as well as the gravel bars are a perfect combination for brook trout. Since most brookies don’t want water that’s over 65 degrees at any time of the year, they’ll hide out in the deeper pools during the warm summer months. Tackle this body of water with some Stonefly nymphs as well as the Au Sable Wulff. There are quite a few flies designed specifically for the Au Sable. Visit a local fly shop to pick some of these up!

The East Coast still has some of the strongest brook trout populations in the country. The Connecticut River in New Hampshire is a 406 mile river and it starts all the way north in Quebec, CA. The trophy stretch of this river is located between First Connecticut Lake and Lake Francis. This a 2.5 mile stretch of water filled with some phenomenal fish.

Nymphing the trophy section is going to be your best bet. There are great seams and riffles throughout this portion of water. Be prepared to high stick your way down the river in search of the brook trout! The earlier in the season you can fish, the better. The water is still cold and the fish are much more willing to eat!

Bring along Pheasant Tail Nymphs, Copper Johns as well as a few Woolly Buggers. Caddis and Adams patterns will help you land fish when you’re looking to fish with some dries.

The Beaverkill River in New York is one of the most famous fly fishing rivers in America. Numerous fly fishing legends cut their teeth on these waters and the river is still quite productive due to extended conservation efforts by the New York Department of Natural Resources. It’s well worth your time to explore these waters.

The upper 25 miles near Balsam Lake are filled with the most brook trout. The majority of this water is pocket water and riffles. It’s technical fishing, but the rewards are well worth your time. Bring those 2 or 3-weight rods to this part of the Beaverkill. You’re not going to have a lot of room to cast, but you’ll find that you can still land fish. Bring Caddis and Pheasant Tail Nymphs along!

The Driftless Region within Wisconsin, Minnesota and Iowa is well known for brook trout. These are a native species to these waters and you won’t go home without landing a few of these fish. The Kinnickinnic is a wonderful option and it’s a little larger water with quite a few access points.

Big Brook Trout in the News

In recent months, continued efforts from Trout Unlimited chapters along with members of states’ Department of Natural Resources have been made to keep brook trout thriving across the United States. These fish are extremely sensitive and need as much care as possible. Whenever you land one, make sure to keep it in the water as long as possible to improve its survival rate.

If you’re looking to land brook trout near you, your best option is to visit your states’ Department of Natural Resources website. Visit the website, click on the fishing tab and look at the species available in your state! These aren’t overly common fish so you may have to do a bit of traveling to find them.

Here’s a list of some of State Websites with insights into finding record brook trout.

Tips for Catching Big Brook Trout on a Fly Rod

When you’re looking to land big brook trout, make sure you target them during peak feeding time. The mornings or evenings are going to be your most productive times. Also, the deeper and colder water is going to hold them.

Be patient and let your flies do the work. They can be picky, but are some of the most aggressive fighters.

Brook trout are usually hiding as tightly and inconspicuously as possible. If I’m not dry fly fishing, I like to nymph for them along cut banks and throughout the eddies in a stream or small river. Let the flies drift right across their face and odds are they’ll bite it.

Where to Find Big Brook Trout in a Lake or River

Search in pockets, under cut banks and dead drift through pools with those wet flies. The most productive fishing, however, is going to be with dries! There are fewer fish that are more aggressive than brook trout when it comes to dry fly fishing.

Get Out and Cast a Fly to Some Brook Trout

Brook trout are one of the most deeply respected fish in the world. Their beauty combined with aggressiveness makes for an ideal fishing experience. Do yourself a favor and take a shot at these fish. Once you land your first, you’re hooked.