We all love chasing brown trout on a fly. For those anglers that don’t usually get to fish for them that often, it can be an incredible experience and one that you ten to remember for a lot longer.

I’m one of those anglers, my main target species is the Rainbow trout, and when I get the opportunity to throw a fly at a brown, I jump at it! In my part of the world, both rainbow and brown trout spawn at the same time of year.  This is due to weather conditions and water temperatures. So, when the spawn starts, most rivers are close to both species. We either have to sit at home and plan the next season’s approach or we go out and chase another species.

For anglers in North America, it’s a little different, and you are lucky enough to be able to fish for either species when one is in the spawn the other is open to the target. You also have a few other species of trout that come to mind as well.

What Time of Year Do Brown Trout Spawn?

It’s worth mentioning that targeting a spawning species isn’t ideal and not very sportsman like.  They should be given the time to do their thing, ensuring the species’ future. Yes, there will be the debate of why can’t and some theories as to why you can, but I would say the general opinion is not to try.

You can chase other species during this time to fill your fishing tank until your beloved brown trout are ready and hungry again. Unfortunately, in my area, they are off bounds, so we have to shift our focus to other species or just use the time to restock our boxes.

So, when do brown trout spawn? Brown trout’s spawning season is very similar to the brook trout, and they usually spawn in the fall from October to December. The nice thing is that in most areas of the USA when the brown trout start their spawn you can shift your focus to the rainbows and cutthroat trout. The browns can be left alone peacefully to complete their spawn

Water temperature is key to the hatching and survival of the trout eggs, alevin, and parr. Trout that are less than a year old are called parr. The water needs to stay constant in temperature and flow to ensure success. The smaller tributaries offer consistent conditions and security from the rest of the river.

The water needs to stay between 6-7°C for optimal results. In certain areas, it may vary slightly, but any rapid temperature change isn’t well received.

Guide Pro Tip: The USGS has stream monitoring stations all over the U.S. Stream Flow and water temperature are usually provided in real time. Search for your favorite river with this link to USGS National Water Information System

The river bottom is prepped for the laying and fertilization of the eggs by the trout arranging a redd. The redd is an oval patch of stones or gravel that is cleaned and arranged. The fish look for softer, stonier areas to make their redd. These areas can be identified from the bank if you know what to look for. From the side, you will see these super clean patches of stones, often with fish hanging around it.

The oxygen level is vital to keeping the spawning process on the go. Everything needs a good, constant supply of oxygen. The trout will use this security area for as long as they need to, usually to the parr or fry stages.

How to Fish for Brown Trout During the Spawning Season

As mentioned in previous posts, the debate whether to fish during the spawn will be an ongoing one that’s for sure.

From my side, I’m an advocate for pre-spawn fishing with zero fishing for the spawning species. In my mind, there are plenty of species to target while the brown trout spawn. Rainbows and Cutthroat trout spawn in the spring, so they are great to fish for.

Before the spawn, I like to fish for bass and carp and rainbows and cutthroat trout. As I’ve mentioned, they will be feeding on the brown trout eggs and parr. They will hang downstream of the redds and pick off easy food. This is a great time to throw a few hotspot streamers and egg patterns. The fish eat with aggression and fight till the last minute!

You can also target pre-spawning browns. These are usually much larger fish and often tip the trophy scales. If you choose to target them and managed a giant, make sure you handle her with care and release them nice and strong.

The setup I use for this type of fishing is nothing different from how I would normally fish. A 5wt or 6wt rod with a matching balanced reel and a floating line will do the trick. A 14-foot leader and tippet are the norm, but with most other species of fish being in a feeding mood, a shorter leader will work just fine. The shortened length won’t bother the hungry rainbow, especially if a hotspot pattern is pulled past it.

Most flies used during this period will have some sort of hotspot in the pattern. Either the bead or tail will be a brighter color, which acts as a trigger for the fish and can also be mistaken for an egg.

During the spawn, it is a no-go zone for brown trout. Yes, you may pick up the odd brown trout moving in the feeding column, but it’s best to let them do their thing and focus on other species or take a break and fill your fly box.

This is extremely important to ensure the sustainability of the species in the discussion, and I feel it’s up to us as fly fishers to make the needed changes.

Should You Target Spawning Brown Trout?

In short, NO! Let the trout spawn without interruption. You can most definitely throw a fly to a pre-spawning brown trout, and it will smash the fly without regret and put up a solid fight. Brown trout are tricky to catch on any given day, so in times like these, you should take full advantage of them eating at will.

Another option is to fish for the other species that aren’t in the fall spawn. Rainbow, cutthroat, and bass are perfect targets during this time.

The rainbows and cutthroat trout will try and feed on the trout eggs should they get the chance, and the bass will be stocking up for the winter by basically eating whatever crosses their path.

What is a Redd, and What’s it Look Like?

A redd is an area on the riverbed that the trout cleans and readies for the eggs. Both hen and cock fish are tasked with rubbing up against rocks to move and clean them. The redd is quite noticeable to the trained eye at the start of the season.

The trouble comes in post-spawn when the river is open to fish again. The redds are usually not visible anymore, but the alevin and parr are still around. So, the possibility of an angler walking through a redd is very likely.

Certain groups and conservation boards in certain areas, GPS mark these areas to prevent this from happening. I mean, all the hard work we do not fish for the fish during the spawn can be spoilt in a matter of minutes. A more practical practice is to mark the riverbank in line with the redd, so the fisher knows not to cross or walk through the water in that area.

Guide Pro Tip: is not to walk through the water during or immediately after the spawn as the redd may not be visible, but it will still have eggs, alevin, or parr in it.

Will Brown Trout Die After Spawning?

This is a common misconception; trout don’t die after their spawn. Certain Salmon species do die, but they are not to be confused with trout.

It’s important to remember to release the fish only once it is nice and strong to swim off again. Any energies depleted during a fight need to be regained by the sendoff.

Brown Trout are usually a little more sensitive to the timing of the spawn, and they like the water temperature to be a little colder to start with, around 4-5°C. So, the usual time for the browns to start their spawn is October to December. For more info on catching brown trout in Montana, read -> A Complete Guide to Fly Fish in Montana

The Colorado brown trout spawning time starts a little earlier than the other states. September to November is their time. Should you want to catch a larger fish, it is best to fish for these fish in early spring before the other angler gets out and about. For more on this, check out this link Best Places to Fly Fish in Colorado.

The Miracle Mile is notorious for its big browns and late spawning times, and they only show signs of spawning from late October through to December. If you want to get a trophy brown, the pre-spawn mission is a must! The below link will help you do this. Read my guide for fly fishing in Wyoming in this article. -> Where to Fly Fish in Wyoming

Slightly earlier than others, the browns of the Michigan area tend to start their spawn in the latter part of summer. Well, they start heading up the side waters and tributaries to start with the making of their redd.

September and October are the months to keep an eye out for the spawn and the redds in the river. If you are fishing this area for the first time, I highly recommend you read the below link to get you on point for that trophy brown. Read more about fly fishing in Michigan with this article -> Best Places to Fly Fish in Michigan

One More Cast to Brown Trout.

Considered the ultimate trout species to catch on the fly, their beauty and wit aren’t easily topped by many others. Their spawn should be the time we as anglers use to try and find a match.

Let us give these fish the respect and time they deserve to give us many more years of pure enjoyment when we target them.

So, if it is brown trout spawning time in your area, skip the river and head out in search of one of the other species that will gladly smash your fly and give you a good fight. 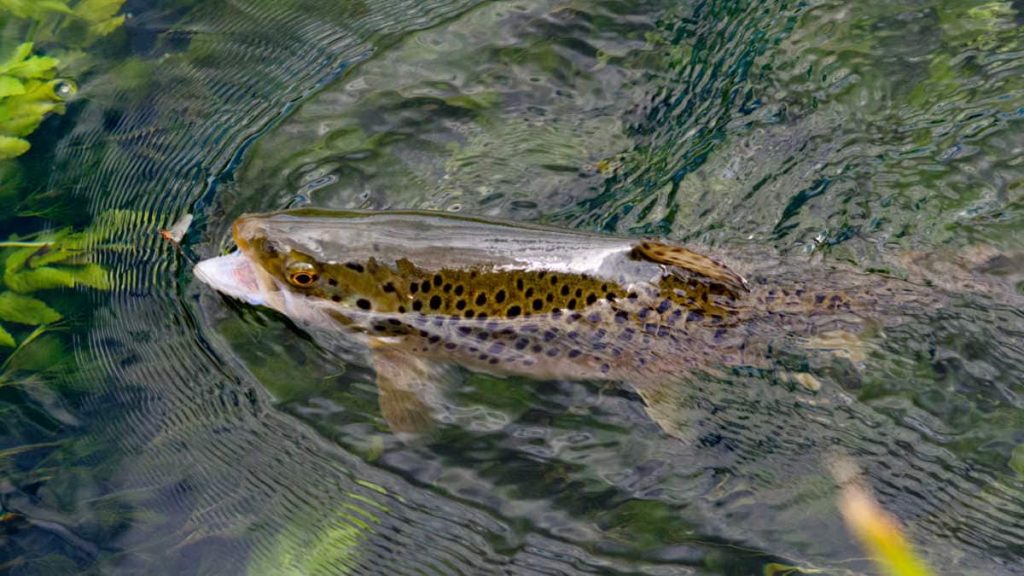 What is a Triploid Trout (Why are they so Big!)

Managing trout populations is something many anglers care about, but we often don’t fully understand… 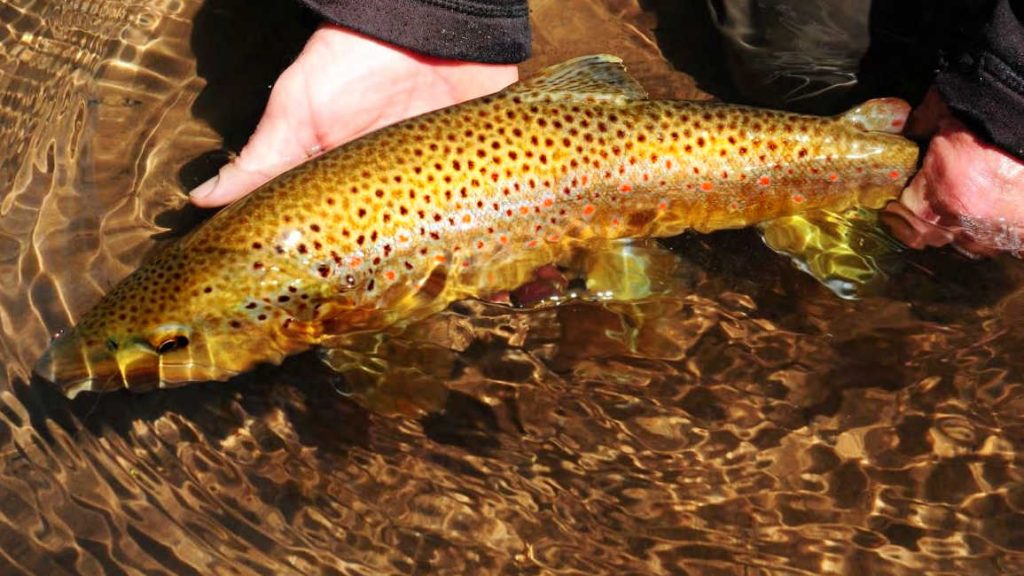 The Complete Guide to Fly Fishing for Brown Trout 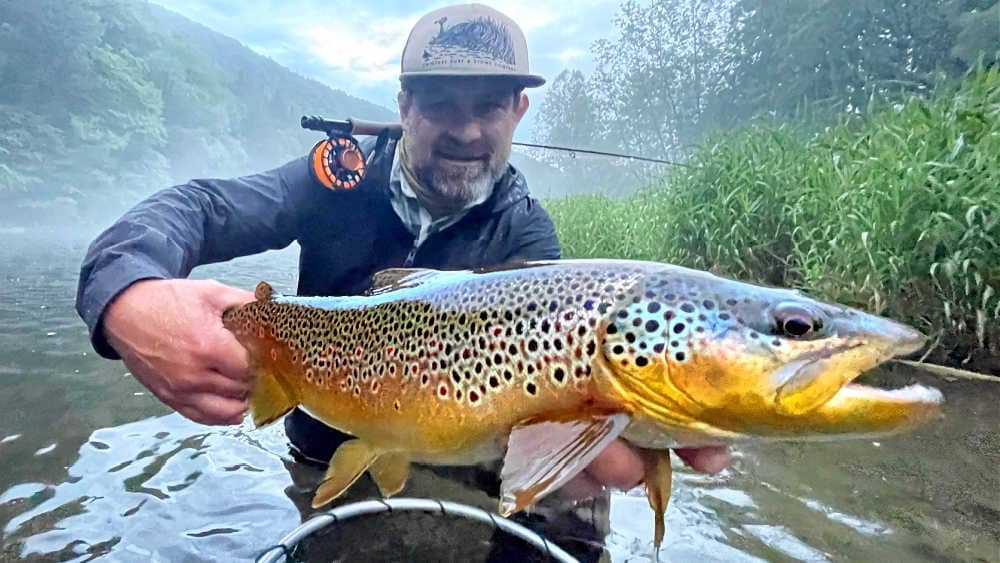 When do Brown Trout Spawn (Get the Timing Right!)

We all love chasing brown trout on a fly. For those anglers that don’t usually… 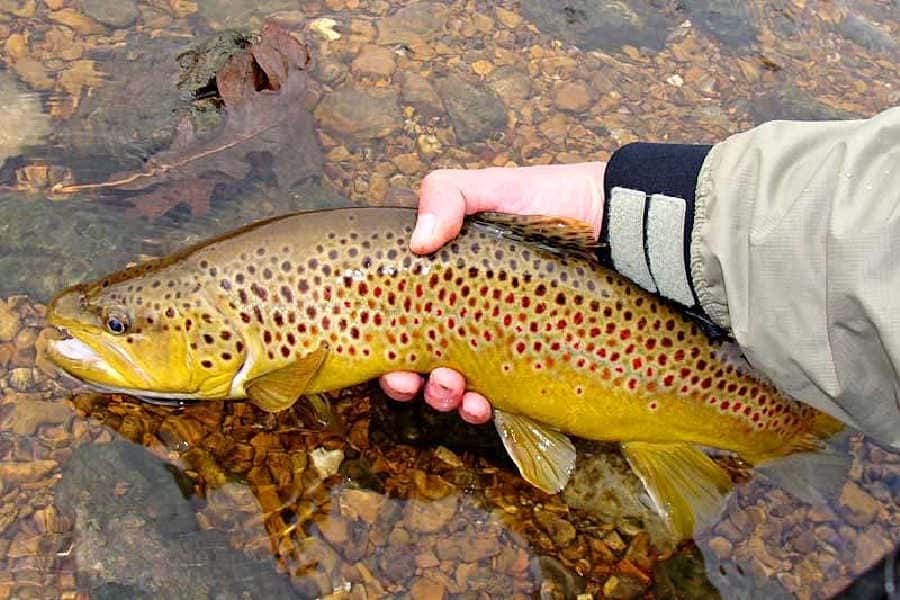 The Only Brown Trout Eggs Pattern You Need (Download Pattern)

If you love fly fishing for brown trout, you know it’s crucial to carry some… 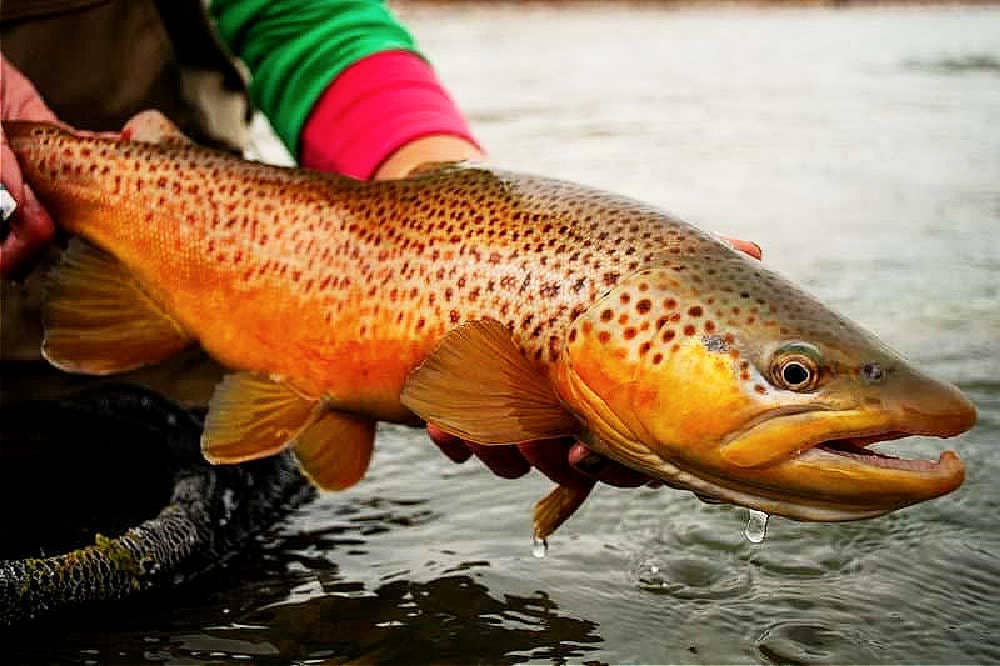 The Real Color of Brown Trout Eggs (Match the Hatch)

When fly fishing with egg patterns, the goal should always be to match the eggs… 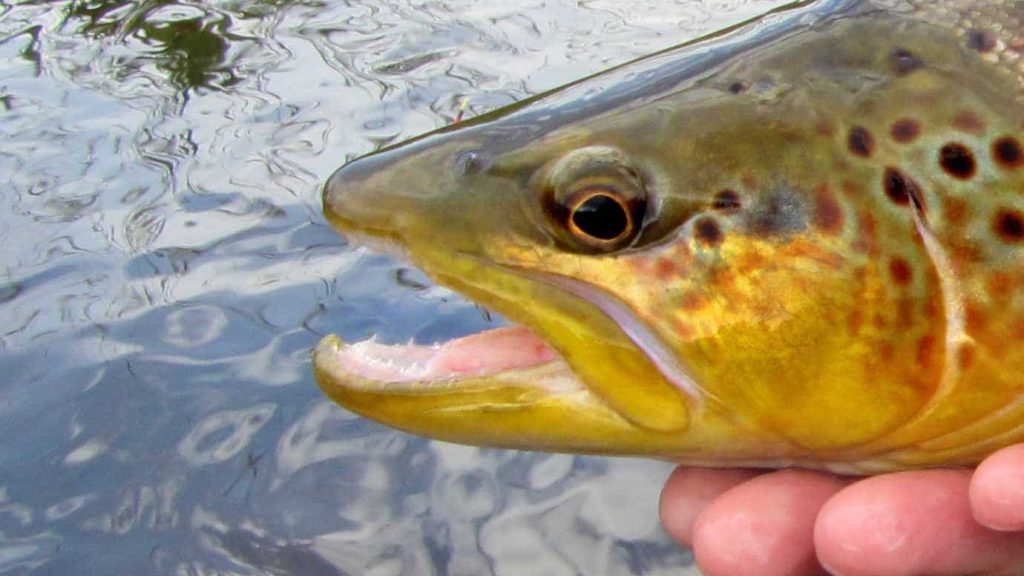 Do trout have teeth?

The trophy trout you’ve dreamed about is in the net. You reach down to pick…