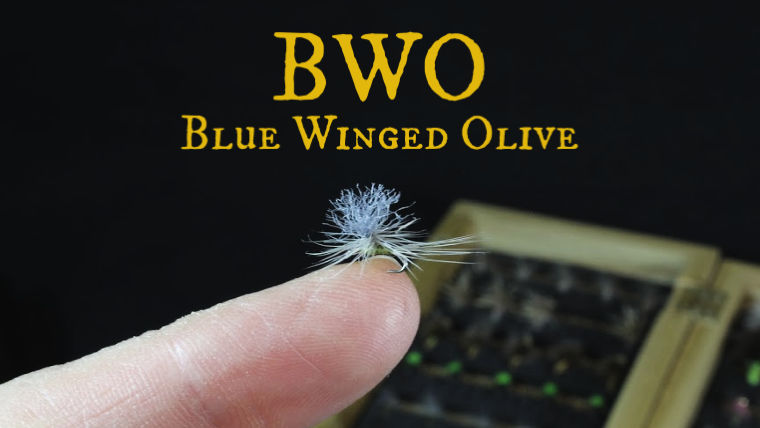 Few things are more embarrassing than asking an angler on their way up from the water what flies to use and not being able to understand their answer. Chances are you won’t have signal to Google the fly so you nod your head and move along. Different areas of the world have their own set of terminology for flies. Knowing the names of flies is an important skill for anglers to have.

Here is a test: what is a Blue Winged Olive?

A Blue Winged Olive is the common name for a fly that is part of the Baetis fly group. They are mayflies with olive bodies and dark wings.

When do Blue Winged Olives Hatch?

Since BWO’s are a part of the mayfly family, they are all over the water year round. There are times when the hatches are more prominent, but it’s a wonderful fly to have in your box at all times. The Blue Winged Olive name has been applied to numerous types of flies so be wary when someone says BWO’s are working.

As long as the water is above 40 degrees fahrenheit, the BWO’s will hatch. Look for the major hatches in alkaline waters. Water with vegetation or shallow gravel runs are going to be the most successful for anglers.

Like every other fly, the Blue Winged Olive will go through the nymph, emerger and dry stages.

When these flies are in their nymph stage, they tend to be very active. They can swim well under water and the high activity attracts the fish. Their bodies are quite slim and you may have heard them referred to as minnow nymphs. They’ll use their midsection to help propel them along through the water. They’ll also cling to rocks and vegetation when they are feeding.

One way to fish the BWO nymphs is with an indicator of some sort. It can be a bright bobber tied a foot or two above the fly or a dry fly. If using a dry fly, be sure to tie on a BWO to use. It’ll show whether or not the fish are more interesting in the dries rather than the nymphs or emergers.

Anglers can also tie a small split shot a few inches above the fly if they don’t want to use an indicator. This will ensure the fly gets all the way to the bottom. It takes more skill, but pay attention to the end of the fly line to identify strikes.

There are a few ways to cast BWO nymphs. The most successful is going to be up and across. This strategy is going to be one of the most successful when fishing BWO nymphs. Cast upstream about eight yards towards the opposite bank. Keep the fly line as tight as you can and let it drift across your body. As soon as the fly is directly across from you, be ready for the strike. As long as the fly line is not dragging the fly downstream you can expect a strike.

You can also fish a down and across method with these flies. It’s not common to cast down stream in fly fishing, but it can be successful with these flies due to their ability to swim. Cast just below you along a bank and let it drift until it begins swinging. Once it swings, strip back towards you and try again.

Be sure to fish the nymph patterns in the morning or any time before the hatch. These flies hatch in the evenings and afternoons so a BWO nymph is going to be a great searching pattern if you don’t see anything rising.

When fishing the emerger or dry flies, focus on the slower moving water. The fish are going to hiding in the slower pockets or eddies. Fish the dries similar to how you would fish a Caddis or Adams. Don’t worry about casting 40 feet upstream to the opposite bank.

A simple cast 8-10 yards upstream in slower moving water is plenty. These flies are going to be small (anywhere between 16-22) so pay close attention. If the fish are active during a hatch, it’s easy to lose sight of these small flies. Like any dry fly, the strike is going to likely happen within the first few seconds of it being on the water. Until you’ve experienced a quality BWO hatch, you haven’t fished!

What Fly Fishing Gear is Needed for BWO?

As far as equipment is concerned, the lighter the better. Again, these flies are going to be small so you don’t need your six or eight weight rod.

Anything between three and five is plenty. Also, use a longer leader if at all possible; something between 10 and 12 feet is going to be best. Spiderweb tippet between 5-7x is going to help. We don’t want the fish focusing on the line in the water. We want them to see the fly and not have to think twice about striking.

Blue Winged Olive: You can find this fly between size 14 and 22. This dry fly is extremely common, but always going to find fish. Plus, they’re easy to find in any sort of fly shop!

Hatchmaster Blue Winged Olive: This fly is a great imitation of the BWO. The long wings off the back of the hook are going to set this one apart from the other patterns.

Brewer’s Butthead SparkleDun: This slender fly is a unique pattern, but great representation of the BWO. It’s going to find fish mid to late summer.