What is POCKET WATER in Fly Fishing and HOW to Fish It! 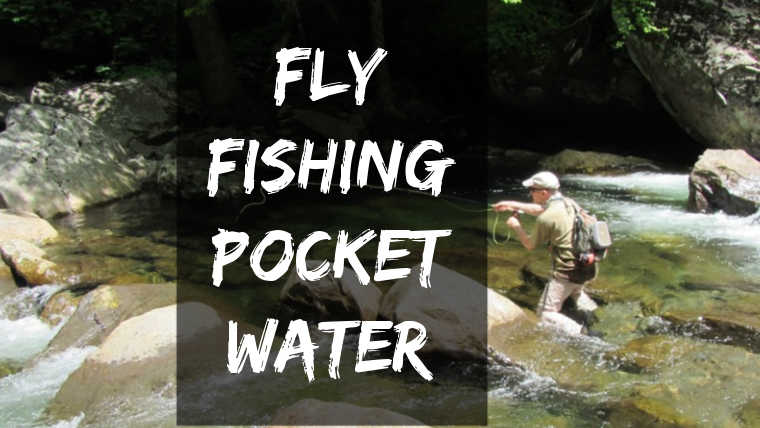 Fly anglers are nothing short of particular. Everything from fly line to wading boots is chosen in an attempt to catch as many fish as possible. Fly fishing is tough enough so a solid setup is necessary to stay comfortable and confident on the water.

On top of a specific setup, anglers also have favorite types of water to fish. Some want a wide and slow river in hopes of dead drifting streamers to catch large fish. Others want to work on their finesse fishing so they czech nymph in fast riffles. Some of the most rewarding fishing, however, can be in what most people call pocket water.

What is Pocket Water when Fly Fishing?

Pocket water is the slack water in a stream/river directly behind a large obstruction (boulder, tree, etc). The object disrupts the normal flow and the water in front and behind forms a pocket perfect for fish to sit and feed.

Before you start fishing a pocket, remember to not make long casts. Tricky currents surround pocket water. The more fly line you have out, the more difficult it will be to create an attractive drift. You likely don’t have time to mend so keep your casts close.

There are three main ways to fish a pocket:

1.The first way to fish pocket water is to stand down river and cast directly behind the obstruction into the front part of the pocket. The fly should land in the slower moving water. This technique will give you the most time in the pocket, but also eliminate a bit of the element of surprise. It won’t drift by the obstruction into the pool, but it will allow for a longer drift throughout the entire pocket.

With a perfect cast, you’ll likely have only five or 10 feet of solid drift before you’ll need to recast.

GUIDE TIP: If you’re downstream casting directly into the pocket, try bouncing/dragging your fly off of the obstruction into the water. Fish are used to insects falling off of the rocks into the water so it’s a useful trick to help make things look more natural.

As soon as it sneaks past the side of the obstruction, be ready for a strike. The fish are likely sitting right behind the obstruction in the deepest part of the pool. They want to strike swimming upwards if at all possible. They’ll see the bait and instincts take over. If you don’t get a strike the first time, it doesn’t mean the hole is blown. The fish could have been distracted with another piece of food or needed another chance to analyze your fly. Cast the fly in the same spot and try again.

GUIDE TIP: Fish like pocket water because it’s slow and full of food, but it also provides protection. Birds of prey like to survey the open water so if you see a deep pocket behind an obstruction, there are likely fish in it.

Once it’s near, get as much slack out of the line as possible. You need to be ready to strip set or quickly pull your fly away. You are at risk of having your fly pulled into the currents along the side of the obstruction and ruining your drift. You’re also susceptible to snagging the front of the obstruction. This method is only going to allow you a few feet of quality drift. But again, it’s not often fished by anglers so you have lack of pressure on your side.

GUIDE TIP: Try and stand no further than five yards from the pocket you are trying to hit. It’s not easy to cast past all of the other rocks and currents in the water.

How to Fish Different Flies in Pocket Water

Nymphing- When fishing a nymph in pocket water, you’ll want as clean of a dead drift as possible. To do so, keep the fly line out of the water. You want the fly to control the drift. Since nymphs are generally not the heaviest fly, do your best to keep only the leader, tippet and fly in the water. Fly line on the water will likely prevent it from sinking to the bottom of the pool. The fish expect nymphs to be closer to the bottom, so anything high in the water column may not look natural. Stand alongside the obstruction, cast your nymph into the current and let the fly do the rest.

Dapping- The dapping method is where nothing touches the water except the fly. Since you only need enough line out for the fly to touch the water, there is no need to cast. It’s a great method to use when fishing tight pocket water.

Either stand to the side of the pocket on top of another rock or on top of the rock creating the pocket. Bounce the fly up and down on the surface and allow it to drift a bit. It’s a great method to use when you see flies hatching on the surface, but don’t have enough room to complete back casts. Once a fish strikes, let it take the fly before you strip set! I have a complete guide to DAPPING – HERE

Dry Dropper Technique– The dry-dropper technique is a great option when you’re trying to find fish. If you’re unsure of what’s hitting, use a dry-dropper because it’s double the amount of bait in the water. The dry fly acts as an indicator and the dropper (nymph) is trailing a few feet below.

When using the dry-dropper technique for fishing pocket water, be sure to allow as much drift as possible. Cast above the obstruction and let one of the currents along the side pull it into the pocket. If you aren’t struck the first time, go ahead and hit the pocket again.

Streamer- Streamer fishing may be the easiest way to fish pocket water. Since streamers are the heaviest flies, they’ll get to the bottom of the pools the fastest. The fish will likely be hanging low, so a dead drifted streamer is going to find fish. Plus, the larger flies usually cause more aggressive strikes and better fights!

Go ahead and use a 3 or 4-weight rod when fishing pocket water. If you can find an 8 or 9 foot version, that’s best due to the amount of control it provides. You want to be able to access different pockets, but a short 7 foot 3-weight won’t allow it. Using the longer rods will lead to more natural drifts.

Fishing pocket water is smart for any angler to try. For one, most people don’t bother fishing the pockets. This lack of pressure leads to the fish being more likely to strike.

A second reason to fish pocket water is because of the challenge it provides. Yes, it can be intimidating to try and hit a small three foot part of the river with your cast, but chances are the fish are going to be more forgiving in a pocket. The water around the obstruction is likely flowing quickly so food is moving at a faster pace.

Even if the fly isn’t presented perfectly, fish will strike out of instinct. They can’t stand the chance of letting a piece of food float by, so don’t shy away from giving pocket water a chance.

Finally, pocket water is a great spot to test your ability. If you’re able to catch a fish out of a pocket, you should feel accomplished. Setting the hook and fighting a fish is one thing, but landing a fish in pocket water presents its own challenges.