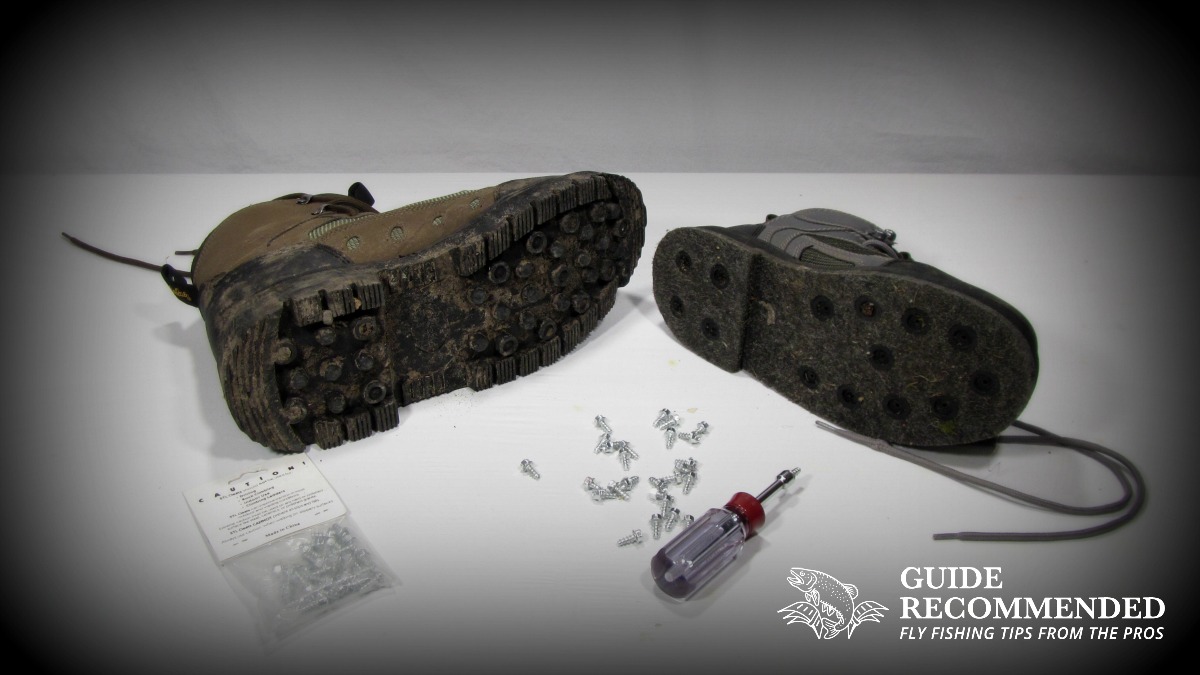 Slipping on rocks all day isn’t any fun and it definitely isn’t safe. Follow these simple steps to install studs in the soles of your wading boots and you’ll have all the traction you need to stay dry-side-up as you move from one honey hole to the next.

Some wading boot manufacturers particularly Simms and Korkers produce their own lines of wading boot studs specifically for the wading boots they produce. If your wading boots fall under this category, it’s recommended you stick with the brand-specific studs as they’re designed to work seamlessly with your boot model.

There are also several companies that produce universal studs that work with most brands of wading boots. Two of the best are Goat Head Spikes (link to Amazon) and Grip Studs. Both are great options, but if you’re trying to keep costs down, go with Goat Head Spikes.

Read about the wading boots I recommend in this article -> RECOMMENDED WADING BOOTS. I detail the plus and minus of my boots.

Beyond the purpose-built wading boot studs available in most fly shops, there are also a handful of DIY options available that offer huge cost savings. Thrifty fly anglers over the years have discovered that aluminum sheet rock screws with hexagonal heads grip rocks just as well as the pre-packaged options but at a tiny fraction of the price. Just head down to your local hardware store and load up but only use screws that are less than 1/2-inch long.

Another DIY option is a screw made by Kold Kutters (Link to Amazon for a price check) that’s designed to be installed in dirt bike tires for racing in snow and ice. As it turns out, the 3/8-inch size screws in perfectly to the sole of a wading boot and provides awesome traction. And, since they’re made of hardened steel, they’re incredibly durable.

How Many Studs Per Wading Boot?

For the most traction on slippery rocks, you want at least 10 studs in each boot. Of course, if you fish streams that aren’t as slippery, you can probably get away with fewer. Most purpose-built wading boot studs come in packages of 20, so if you want to be fully kitted out, you’ll have to buy two one package for each boot.

Before you jump in and start screwing in studs at random, take a minute to think about the best location for each. There isn’t a single best stud pattern for wading boots, but here are a few tips to get started.

Generally, your studs should be spread out evenly across the sole of your boot, with a slightly higher concentration of studs on the outer edges. Additionally, your heels and ball of feet make the most contact with the ground, so each of those areas should be well studded.

Whatever you do, don’t install so many studs that you replace your rubber sole with steel that’ll make your boots more slippery than having no studs at all!

Screw the Studs In But Don’t Over-Tighten

Installing wading boot studs is very straightforward and all you need is a screwdriver sized to match the stud head. Most packages of purpose-built studs come with the proper screwdriver for the job. Use it.

Again I cna’t stress this enough, get the right wading boots to start with.? You can read about what I USE in the article -> Recommended Wading Boots

If you’re using DIY wading boot studs, simply use the appropriate bit either on a manual screwdriver or a powered drill. If you do use a powered drill, make sure the torque is set low enough that you won’t strip the screws or damage the sole tread.

On most rubber-soled wading boots, there will be small indentations on the knobby parts of the tread ? that’s where the studs go. Simply screw in the studs in the pattern you’ve decided on and you’ll be on your way.

The most important thing to remember when installing wading boot studs is to never over tighten. If you do, chances are you’ll strip out the rubber sole of the boot making it impossible to hold a stud in ever again.

That’s it! Keep your wading boots studded up and say goodbye to in-stream slippage!