How to Reel in a Fish with a Fly Rod 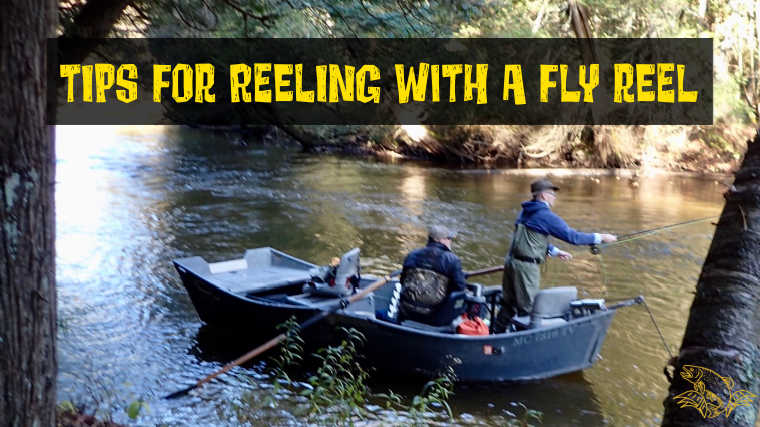 Earlier this summer, I was guiding two guys on a pretty stretch of river that’s known for having a lot of fish – albeit not terribly large ones – and incredibly easy to access. It was July, early in the morning, but still hot enough that the cool spring water felt refreshing.

I set my clients up on a likely spot and split my time between the two, giving tips on casting, explaining why we were using the flies we were, and re-tying knots.

The upstream client was throwing a grasshopper and two nymphs to the far bank. I watched with my arms folded, somewhat expectantly. To my surprise, a big brown finally rose, swallowed the grasshopper, and immediately darted upstream.

The fish was probably 20 inches, but the client didn’t know that. In my experience, it’s best to play it cool when new anglers have a big fish on the line – there’s less pressure to put it in the net.

So, I tried to talk this guy through landing the fish, but he insisted on clamping the fly line between the cork grip and his palm, not letting the hefty trout take any line. And predictably, within a few seconds, the leader snapped.

The entire time, he neglected to use his reel (despite my urging him to do so). If he had, he would’ve landed the nicest brown trout I’ve personally seen from that river.

The point here is that, while often a fly reel is just a glorified line holder, there are instances where it’s absolutely imperative to know how to reel in a fish with a fly rod. You never know when you’ll hook into something that just can’t be tamed with hand-stripping line and a bit of sideways rod pressure.

But how exactly do you use a fly reel to its fullest capabilities? Let’s take a look.

What Does “on the reel” Mean?

Before we get into the nuts-and-bolts of reeling in fish on a fly rod, there’s some terminology to understand. One phrase you’ll hear often is to either put a fish “on the reel” or “don’t put it on the reel.”

Putting a fish on the reel is when all your slack line from casting and mending is back on the reel, and your line is tight from your reel to the fish. You don’t have any loose line hanging between your fingers and the cork, or floating around you on the water. At this point, you’re no longer in charge of the fly line as it flies through your guides – the reel is.

Or, to say it another way, putting a fish on the reel means that you’re using your reel instead of hand-stripping line to bring a fish to your net.

When to Use the Fly Reel

As a guide, I get to see anglers with a variety of fishing prowess. Most often, it’s the newer anglers who either use their reel too little, or too much.

Knowing when to put a fish on the reel versus when you should just strip in line plays a key role in how successful you’ll be when landing fish.

Generally, if a fish takes your fly and immediately shoots off up or downriver, I take that a sign to reel in my slack line and put it on the reel. A fish taking off that quickly is likely looking for the first root ball or rock to break your line on, so having the stopping power of a reel is important in avoiding that situation.

You’ll also want to use the reel when you’ve made a long cast, or perfectly mended a long drift. With so much line on the water, it doesn’t make sense to retrieve it all into a pile at your feet. If the fish takes a run during the middle of the fight, for example, the line could tangle, causing you to lose the fish. Putting it on the reel, especially with that much line out already, increases your chances of landing the thing.

Remember, you don’t need to use your reel for every fish. Often, when fishing the high country, I don’t ever touch my reel except to pull off line for slightly longer casts. And most trout don’t require a reel, either, but it is nice to reel in your line with each fish so that you don’t end up with a tangled mess afterwards.

How to Use the Fly Reel

When it comes to reeling in fish on a fly rod, there are some serious differences between conventional angling reels and fly reels. While conventional anglers use their reels 100 percent of the time, fly anglers don’t. So, it’s not uncommon to find an angler who doesn’t know how to properly use a reel.

Thankfully, it’s simple. Ensure your drag isn’t too tight, and while keeping your rod tip high and putting pressure on the trout, slowly reel in your line. If the fish is down on the bottom of the river, reel in as much as you can, dip the rod, and reel as you lift it again.

Guide Tip: Maintain you’re fly fishing reels. That little bit of sand that got into the reel when you set it down could cause the reel to lock up. Read 11 tips for Maintaining a Fly Reel

Don’t reel too fast, or you’ll put too much tension on your leader and likely break the fish off. Don’t be slow, either, because not enough pressure creates slack in the line, and that’s an opportunity every trout will take to spit your hook. Reel when you feel the fish giving you an inch during the fish, and reel purposefully.

You can also use the reel to put the brakes on a hot fish – without breaking your tippet. That’s where the drag comes in.

Using the Drag on a Fly Reel

The drag system on most fly reels is what we call a “disc drag” system. Basically, this means the reel’s stopping power is created by multiple discs grinding against each other, which prevents your fly reel spool from turning quickly.

Your drag knob adjusts how far apart the discs are from each other, thus increasing or decreasing the amount of pressure a fish has to exert in order to pull line.

The drag on a fly fishing reel can be a little bit deceiving. Read how to set the drag in my article – Understanding the Drag on a Fly Reel.

Generally, for almost all of my trout fishing, I have my drag set to just a few clicks below medium. Reel designs vary, but you can almost always adjust the drag on your reel by turning the knob on the outside of the reel frame.

Remember, you don’t want to go too overboard with drag. Too much pressure, and the fish simply breaks off. Too little, and the fish likely escapes, too, but due to a hook popping loose instead of tippet giving away. It’s about finding the happy medium that works best for you.

How to Hand-Strip Fly Line

If your reel malfunctions, or you find yourself chasing fish that usually tape out at small sizes, then knowing how to hand-strip fly line is a good skill.

Essentially, you’re doing two things simultaneously. First, you’re retrieving fly line by pulling it in with your free hand (the left hand, for most of us anglers). Then, you keep the fly line clamped firmly between your fingers and the cork grip, which allows you to modify and adjust how much pressure is being put on a given fish.

With the hand not holding line against your cork grip, you grab slack as near to your other wrist as possible, and pull it all back. The fish won’t like it, but this is a powerful technique that can really put big fish in the net far more quickly than other methods.

Using the reel on a fly rod is almost always a good idea. The trick is knowing when to use it, and how. Hopefully after reading through this, you have a better idea of where you’ll put a fish on a reel ne next.