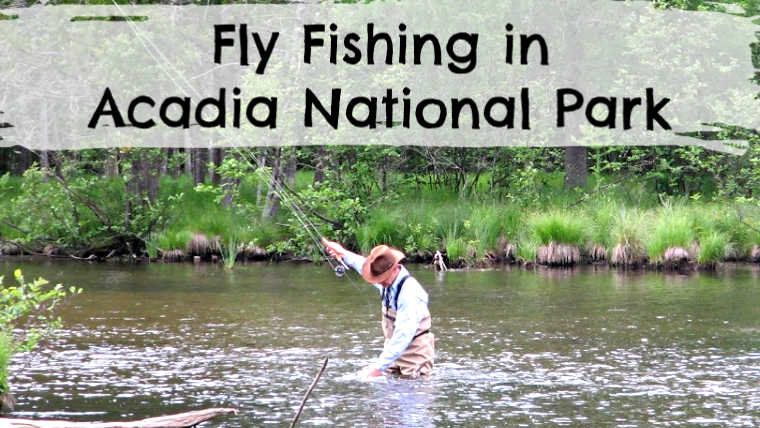 Acadia National Park is one of the few places that I’ll admit is perhaps more visually captivating than my beloved Rocky Mountains. Having grown up in the shadow of some of the West’s most iconic peaks, I’m not one who’s easily impressed by just any landscape.

Acadia, though, is in a completely different league. This stunning national park is on an island off the coast of Maine, and is home to some surprisingly fantastic fly fishing. While you can certainly fly fish the ocean surrounding the island, we’ll focus today on just exactly what you can find when you take a fly rod and go for a walk through this parks rivers and ponds.

As usual, these spots aren’t listed in any particular order, although the first three are pretty incredible.

Acadia is unique because it’s home to Maine’s native brook trout, as well as populations of landlocked salmon. The only landlocked salmon I have here in the Rockies is kokanee – a sockeye, which is famous for not eating flies unless they’re spawning.

The Atlantic salmon of Acadia, however, will rise to take dry flies. As noted conservationist and legendary angler Lee Wulff once said, “Why does a salmon rise? Why does a small boy cross the street just to kick a tin can?”

The point of that is to remind you that Atlantic salmon can – and will – surprise you. Fishing for them in the ponds of Acadia is a treat.

It’s the largest lake on the island, and one of Acadia’s most popular. The maximum depth is 110 feet, so using a float tube or boat of some sort is highly recommended.

Where to Fly Fish on Eagle Lake

There’s plenty of shoreline, and a trail runs all the way around the lake. However, if you’re looking to launch some sort of boat or float tube, then I’d recommend this spot on the north end of Eagle Lake.

One of my favorite things about fly fishing is how universal it is. The flies that work on my favorite streams here in the Rockies will, to an extent, work in the Appalachians.

So, don’t overthink your fly selection for Eagle Lake. Trout are trout, and eat on similar food across the world. Streamers, nymphs, and dry flies will be a must, but I’d also suggest you take the following flies:

I’ve yet to meet a fly angler who doesn’t love brook trout. I think we all secretly love that the brook trout – and the mackinaw, dolly varden, bull trout, and arctic char – aren’t actually trout, but rather, trout-adjacent species. It feels slightly exotic to catch char all day instead of trout.

Regardless of semantic (and genetic) differences, brook trout fishing is synonymous with the upper East Coast. This is where brook trout have lived for thousands of years, and fishing for them in their native range in a place as stunningly beautiful as Acadia is a rare treat.

That’s what Bubble Pond offers. It gets regularly stocked with brook trout in the fall, and the ones that winter over tend to be a decent size. You’ll find nothing but these native fish swimming in this gin-clear water.

Where to Fly Fish on Bubble Pond

Just like Eagle Lake, there’s no official launching point for fishing on Bubble Pond. Don’t let that deter you from getting a canoe or float tube on the water, though. This is the sort of fishery that demands it.

Your best access will be here, on the north end of the lake near a trailhead.

My favorite flies for brookies include leeches and scuds. In most any brook trout lake, you’ll find these bugs in large quantities. In the event that those don’t interest the resident char, however, you can go ahead and use smaller streamers.

I’ve always been partial to fishing small streams, and if moving water is what gets you going in fly fishing, then don’t worry – there’s plenty of it in Acadia. While you won’t find every stream listed in a fishing guidebook, it’s a safe bet to assume that any trickle of water on this island is home to some native brook trout.

The fish won’t be terribly large, but you’ll almost always have spots like this to yourself. For those who value solitude and the intimacy that comes with fishing on small water, Hunter’s Brook is an absolute gem.

Where to Fish on Hunter’s Brook

Conveniently located near the town of Seal Harbor on the south end of the island, Hunter’s Brook is easily accessed throughout most of its length. However, if you take Champlain Drive east out of Seal Harbor, you’ll cross Park Loop Road. Immediately after that, you can pull off the road, rig up your rod, and follow the stream towards the mountains or the ocean.

This is classic small-stream fishing at its finest use small dries, in 18-22, to avoid doing damage to these native fish.

If you love exploring the back roads of Maine searching for hidden jewels to cast a fly rod, you’ve got to check out – 9 Best Places to Fly Fish in Maine: Maps Included

Yet another classic small stream fishery, Jordan Stream is great if you’re wanting a more remote small water experience. The stream is home to brook trout, while the lake it feeds into is home to lake trout and landlocked salmon. So, during the fall and spring, expect to find spawning fish in the lower reaches of this stream.

You’ll want to fish here using the same small flies as you would on Hunter’s Brook. One of the unique things about fishing in Acadia is the similarities between the waters. As a traveling angler, you won’t have to carry tons of extra rods, reels, and flies. One setup on this stream will work for all the other streams on the island, and vice versa.

With that said, don’t let yourself fall into too much of a rut. One of the things I love doing when visiting new water is to see just how far I can push my luck. What I mean by that is, I want to see if I can get fish in water that’s new to me, to eat flies I tie specifically for certain hatches or rivers back in the Rockies.

It works, and far more often than I’d expect. There’s something fun about fishing a Green Drake nymph that I tied for use on the Middle Provo to small brook trout on an island off the Atlantic Coast.

Jordan Pond is one of the bigger lakes in Acadia, and it’s a place where you can easily test out the oft-discussed “big flies catch big fish” axiom we hear so often in this sport. Home to nothing but lake trout and landlocked salmon, you’ll want to fish big flies – and fish them deep. While you may get lucky and find some Atlantic salmon feeding on top, you’ll likely want a wide selection of streamers if you’re going to have a productive day of fishing on this lake.

If I was spending a lot of time and money getting myself to Acadia, and then fishing there, I’d focus a lot of my time and effort on Jordan Pond. I’ve yet to catch a lake trout on a fly rod, and doing so in its native range would be an absolute treat. Throw in the bonus of Atlantic salmon being present, and you have a veritable angler’s dream.

The ever-popular Ghost patterns are a must, as are any bunny leeches or wooly buggers you feel like tying up – or buying – for this trip.

So far, Acadia has proven itself to be a char and salmon fishery, but that’s not all there is to find here. The park has some impressive fish diversity, and that’s on full display at Hodgdon Pond. This fishery is home to brown trout, chain pickerel, smallmouth bass, sunfish, white perch, and yellow perch.

If you’re fishing with younger kids, the perch and bass can provide faster action than lake trout or salmon. And it’s always nice to spice things up a little, even in a brook trout haven like Acadia.

The smallmouth fishing should be better early in the summer, and then again until the end of the lake season. Hodgdon Pond has plenty of decent smallmouth habitat, so you can focus your fishing efforts in places where they’re likely to build beds and spawn.

And, I’d suggest to not forget the bass poppers. Topwater action – especially for smallmouth – is always such a blast. If the fish are eating off the top, and you’re trying to get someone else to fall in love with fly fishing, there’s hardly a better way to do so than by having them fish poppers to bass that are willing to smack them with reckless abandon.

Ever wondered where to toss a fly in July? Maine made the list for destinations during those hat summer months. Read more in this article 7 Best Places to Fly Fish in July

Home to brook trout, landlocked salmon, smallmouth bass, and chain pickerel, Long Pond has plenty of different angling options depending on what you’re in the mood for.

Located on the west side of the park, Long Pond is a sprawling mass of water that’ll demand your attention for days. It’s a large enough body of water that you absolutely need a boat if you want to really fish it well. In fact, it’s the only lake in Acadia National Park that doesn’t have a horsepower restriction on the size of motors than can be used when boating here.

The salmon and bass will likely provide the bulk of the fishing action here, though don’t overlook what the brookies and pickerel have to offer, either. Standard flies will work well here, though I’d strongly suggest using a sinking line if you’re chasing salmon.

You really only need two rods while at Acadia – a 9’ 6wt that handles wind and bigger flies well, and then a shorter 7’ 3wt for the stream fishing.

I’d pack one sink tip, one floating, and one full-sink line for your rods. Any reel should do, though you may want a disc-drag if you get into bigger salmon on the lakes and ponds.

Aside from that, you’ll want your usual assortment of waders, boots, and some sort of vest or pack.

Acadia is a fairly remote place, with a sparse year-round island population. A lot of the fly shops and guides will be found on the mainland, though there are a few located in the towns of Bar Harbor and Seal Harbor.

Lodging and camping isn’t hard to come by here. Bar Harbor and Seal Harbor have plenty of hotels and lodges to suit a variety of budgets. Camping is regulated to a few public campgrounds maintained by the National Park Service, or private campgrounds.