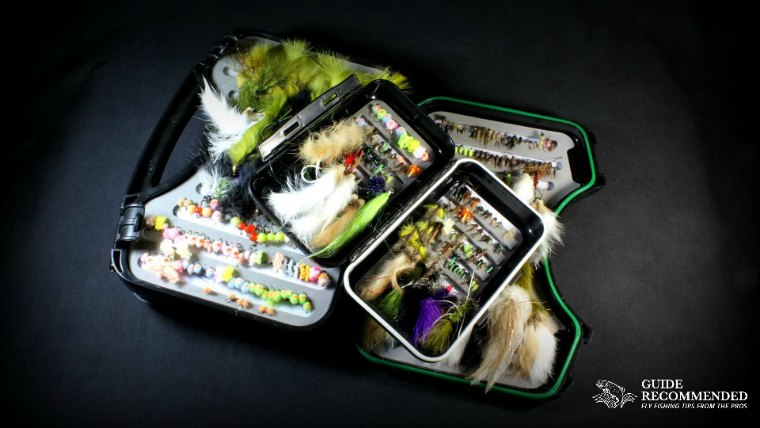 In an effort to “match the hatch,” fly tiers have developed fly patterns to imitate just about every variation of insect a trout might eat. Why settle for a generic mayfly nymph when you can have a more precise imitation of hexagenia limbata.

The problem with this, however, is that there are now thousands upon thousands of fly patterns in existence. And for those who are new to the fly fishing game, this overwhelming number of fly options can spell trouble.

But before paralysis by analysis sets in, here’s a little secret that will help you get a better grip on the wide world of flies:

Trout in rivers and lakes throughout North America feed primarily on only four groups of insects: mayflies, caddisflies, midges, and stoneflies.

Yes, there are thousands of different fly patterns, but the vast majority are just different variations and imitations of the aforementioned bugs. And no, you don’t need exacting imitations for every insect species. As long as you select a fly that roughly resembles the natural in color, size, and body profile, you’ll be catching fish.

Found in most, if not all, cold water lakes and streams, mayflies are an incredibly important food source for trout. When a mayfly hatch is going off, famous dry flies like the Adam’s or Quill Gordon can be used to seize the opportunity. But since mayflies, like other aquatic insects, spend the vast majority of their time underwater, imitations of mayfly nymphs outperform their dry fly counterparts more often than not.

Anytime you hear the words “Blue Winged Olive,” “Hexagenia,” “March Brown,” “Hendrickson,” or “Sulphur,” mayflies are around and these are the nymphs you’ll need:

Unlike mayflies which go straight from larva to winged adult, caddisflies go through a complete metamorphosis which includes a pupal stage before emerging. This extra lifecycle stage of caddisflies provides trout even more opportunities to feast. Luckily, matching a caddis nymph, regardless of life stage, isn’t difficult if you have the following flies. ?

Midges are common in stillwaters ranging from small ponds and ditches to pristine mountain lakes. Tailwaters throughout the Western United States are also hotspots for midges, keeping resident trout well-fed year-round. Dry flies such as the Griffith’s Gnat are great during a hatch, but if you want to cash in on a trout’s midge-addiction, flies that imitate midge larva are what you want.

Requiring the cleanest, most highly oxygenated water, stoneflies aren’t nearly as widespread or prevalent as mayflies, caddisflies, or midges. But if you do happen to be fishing a river where stoneflies live, expect to find big healthy trout feasting on these prehistoric insects.

Here are two nymphs that will help you catch stonefly-seeking trout in a variety of conditions:

Add A Few Worms and Eggs and You’re Set!

You’ve covered your bases with a selection of nymph flies that imitate the most prominent insects trout eat mayflies, caddisflies, midges, and stoneflies.

But before you trek to the stream, be sure to throw in a handful of ever-faithful San Juan Worms and an assortment of Glo Bugs and other egg-flies. These oddball flies might not fit perfectly in the “nymph” category of flies, but because they’re often fished just like more traditional nymphs, no nymph fly box is complete without them.

Learn all about tying a leader. This is an essential technique. I usually buy my leaders, but knowing how to fix and build a fly fishing leader is important. Article How to Make a Fly Fishing Leader

Okay, you’ve learned a lot about nymph fishing flies, now apply this knowledge by catching brook trout. Read about the tips and techniques in How to Catch Brook Trout: a Beginners Guide

Sometimes You want a fly to float. In this article How to Keep a Dry Fly from Sinking you learn my tips.