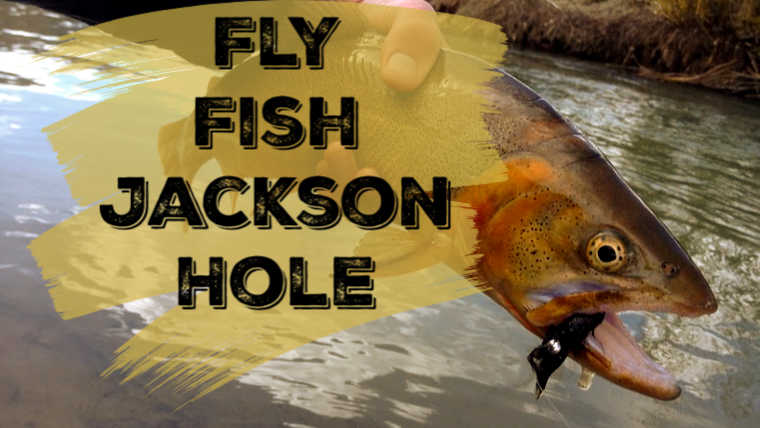 I moved to Jackson Hole when I was 22 years old to ski, and although the skiing was incredible, it was the fishing that kept me there for five years. I was blown away by the different types of water that you can access just a short drive (or bike ride) from town. This conservation-minded community has done a great job of protecting their trout waters, and their efforts have preserved some of the finest trout waters in the west.

1. Snake River – A Picture of Fly Fishing in the West

I have spent more time on the Snake River than any other river in the West. There are few rivers that are more scenic than the Snake. Bison, elk, and moose are frequently sited on the banks, and fly fishermen are usually joined by the likes of ospreys and bald eagles on the river. You can fish the Snake River all year round, except during cold snaps during the winter and the runoff that usually occurs in May/June.

Where to Fish on the Snake River

There is plenty of public access along the Snake, but I always like to start at the Wilson Bridge.

You can either park at the Emily Stevens Park on the east side of the Snake River, or drive across the river and park on the west side (the turn will be on your left right after cross the bridge). Well established dykes run up either side of the river, and both provide plenty of access to good riffles and long pools.

Recommended Flies for the Snake River

Pro Tip : Twitch that bug! Experiment with twitching your bugs at the beginning, middle, and end of your drift. Sometimes a little, sometimes a lot.

For my 23rd birthday, two buddies and I left Jackson Hole early in the morning and drove down to the Green River to fish. When we got there, the river was boiling with trout sipping on Size 16 BWOs. It was one of the best days of fishing that I can remember.

The Green River flows out of the majestic Wind River Range in Wyoming and flows for 730 miles before it reaches the mighty Colorado in Utah. The Green River is home to rainbow trout, brook trout, lake trout, mountain whitefish and brown trout. Of these species, the brown trout are my favorite species to catch in the Green River. The average fish on the upper Green River is 11 inches, but there are plenty of old hogs that measure 22 inches or better.

Where to Fish on the Green River

The lower stretches of the Green River below Fontenelle Reservoir are infamous drift boat waters, but the stretch above Warren Bridge is my favorite section to wade. To reach this area, head southeast out of Jackson on US Highway 191 towards Pinedale. Follow this down until you reach Warren Bridge, and take a left onto BLM Road 5201 and head north. There are numerous campsites along this road, so just pick a juicy stretch of water and get your feet wet.

Recommended Flies for the Green River

The Grey’s River is one of the most overlooked rivers outside of Jackson, WY. The Grey’s River Rd follows the river for its entire length and offers anglers a lifetime’s worth of water to explore. The best fishing on the Grey’s River is right after runoff in July, and then again starting in mid-September through October.

Where to Fish on the Grey’s River

The Grey’s River is probably the best river in the region for wade fishing, and it offers anglers the opportunity to park and wade into the river just about anywhere. During the spring and fall, I like to fish the lower sections, but during the summer I like to drive upriver and fish.

To get there, head south out of Jackson towards Alpine. Once in Apline, turn left onto Forest Rd 10138 and drive as far as you want upstream.

Recommended Flies for the Grey’s River

The North Fork of the Buffalo Fork requires a bit of a hike, but that is what makes this river so special; it is in the middle of the Bridger-Teton National Forest and receives very little pressure. The hatches on this river are so prolific that even the whitefish start feeding on the surface. The Buffalo Fork is the only place I have ever seen a whitefish eat a Size 10 Purple Chubby off the surface.

The North Fork is usually the last river in the area to clear after runoff, but you definitely want to visit this river when the water level starts to drop. The stonefly hatches on the Buffalo Fork are the stuff of legend. The Snake River Finespotted Cutthroat trout is the dominant species in this river.

Where to Fish the North Fork of the Buffalo Fork

As mentioned above, to access the North Fork, you have to be willing to go for a bit of a hike. The North Fork runs through rugged bear country, so you want to bring an extra layer, water, bear spray, and make sure that you go with a friend and let people know where you are heading. I like to park at the Turpin Meadows Campground.

There are miles of water to fish on the North Fork, so I usually pack a tent and make it a two-day trip.

Recommended Flies for the North Fork of the Buffalo River

Below Jackson Lake is a small dam that was built between 1911 and 1916. If you’re visiting Jackson in the winter and your legs are tired from skiing some of the gnarliest inbound terrain in North America, grab your 6wt and head up to Jackson Lake Dam. Bring your waders, midge patterns like the RS2 and Zebra midges, and a couple big stonefly nymphs to use as attractors on your tandem nymph rig.

Pro tip: Bring a couple streamers and fish these low and slow in the current, when your line suddenly feels spongy, strip set and hold on; some MONSTER Lake Trout hang out beneath the dam.

If you have a high clearance 4WD vehicle and a day off, head up to Soda Lake. This lake is full of monster cutties. They are picky beasts, so bring a selection of white/olive streamers, mayfly imitations (both dry and nymph), and a couple terrestrial and hopper patterns. I like to hike up on the steep bank and locate fish before casting to them. The best time to visit Soda Lake is after the spawn or during the fall. Bring a floating line, intermediate sinking line, and a 6wt rod that you’re comfortable casting in a stiff breeze.

If you like ‘creekin’ (fishing small creeks), then drive down to Fall Creek. This little creek winds through willows and meadows and has great populations of cutties. Bring your 3wt and plenty of Elk Hair Caddis, Parachute Adams, and small terrestrial patterns. If the water is a litte murky or high, try fishing a Mohair leech pattern in some of the deeper holes. The average fish is about 8 inches, but every now and then you’ll find an 18in cutty hiding in those deeper holes.

The Teton River is located on the other side of the Tetons in Idaho, but the trip is worth it. This river is home to healthy populations of rainbow trout and brown trout. The last time I fished the Teton River, we only threw streamers and we landed several fish over 20 inches. There is relatively good access on the Teton River, but be sure to respect private land boundaries.

Located just a short drive from Jackson in the National Elk Refuge, Flat Creek offers some of the toughest and most rewarding spring creek fishing in the West. These fish are incredibly picky, so bring fluoro tippet in the 4x-6x range. The best flies for Flat Creek include BWO and PMD patterns (cripples and emergers Size 16-22), hoppers (parachute are my favorite Size 10-16), and small midge and mayfly nymphs. It can be breezy out here, so bring a 6wt. It is all about stealth and a perfect dead drift.

The Henry’s Fork is famous for its big trout and hatches that blanket the water. The salmon fly hatch during the spring (late May through middle/late June) and the fall mayfly fishing is incredible. The Henry’s Fork has great numbers of rainbow trout, rainbow/cutthroat hybrids, and brown trout. The average fish is between 10-14 inches, but there are monsters in these waters and fish weighing 5-8 pounds and measuring over 25 inches aren’t unheard of.

11. South Fork of the Snake River

Although it is a little bit of a drive, this river is definitely worth the trip. There are great numbers of brown trout, rainbow trout, Yellowstone cutthroat and Snake River Finespotted Cutthroat in this river. During the Salmon Fly hatch in June, 15-25in fish willing rise to Size 6 dries. Make sure you bring a variety of dries, nymphs, and streamers, because these fish tend to key into certain bugs and their focus can change several times a day.

Located south of Alpine, this north-flowing river is a great place for beginners and advanced fly fishermen. There is plenty of public access, and good numbers of willing cutties measuring between 10-16 inches. Caddis patterns, Parachute Adams, and terrestrial patterns are all good flies to take with you on the Salt. Bring a couple beadhead Copper Johns and Hare’s Ears as well.

Pro Tip: Bring a streamer rod and rip white/olive streamers through the deeper holes… There are some big brown trout in the Salt River.

Located in Yellow Stone National Park, Yellowstone Lake holds great numbers of native cutthroat trout. Bring black or olive woolly buggers and fish them along underwater shelves. A 6wt, fast action rod with full sinking line is usually the best option. Make sure to follow all the rules (found in the link below) and properly dispose of every Lake Trout you catch.

If you want a chance to sight fish to monster Lake Trout, head to Jackson Lake shortly after the ice melts in the spring. The Lake Trout cruise the shallows shortly after the ice melts, and I’ve caught some monster lakers right from shore at this time of year. Bring a 7wt rod with an intermediate sinking line, a good selection of baitfish patterns, and an extra layer.

The average fish in the Yellowstone River is between 14-16 inches, and there are monster brown trout and rainbow trout lurking in the riffles and deep runs. A good selection of mayfly, caddis and stoneflies will serve you well. Black or olive streamers during the fall are usually very productive. Always carry bear spray and follow park regulations!

A 6wt fast action rod with floating line is your best option for the waters around Jackson. If you’re throwing streamers, an intermediate sink tip line is the best. Snake River Finespotted Cutthroat are the dominant species in this area, and they are willing predators that like to eat big dry flies, BWO patterns, and streamers. Always be wary of wildlife, and carry bear spray and an extra layer.

Want More Places to Fly Fish in This Region?